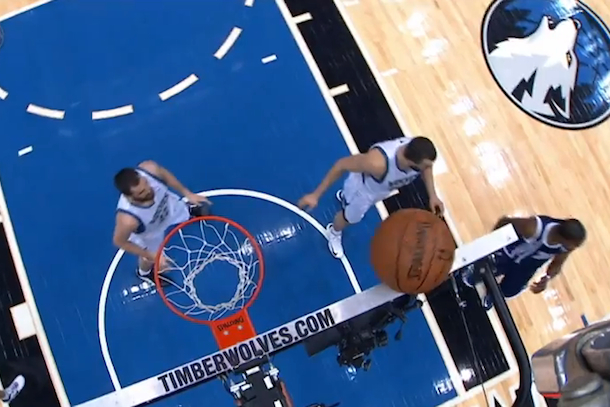 Some people were wondering how the Oklahoma City Thunder would fare this year after the departure of James Harden in the offseason. And after a pedestrian 9-5 start it looked like those people had their answer.

But then the Thunder rattled off 12 straight wins. Now people are convinced that, yes, they are still an elite team in the Western Conference. In fact, they are so elite that, even when they lose, one of their players still gets the highlight of the game.

Last night in Minnesota, Kevin Love and the Timberwolves ended the Thunder’s big winning streak. However, the story of the game was one insane basket from—who else?—Kevin Durant. KD got the ball at the top of the key, beat three T-Wolves players, and put up a shot that bounced on the top of the backboard twice before falling through the hoop, all while being fouled on the play. Like you do.

So now here’s the big question. Which was more impressive: Durant’s shot off the top of the backboard, or Ryan Anderson’s shot over the backboard?