>Total Pro Sports
NHL
The NHL Is Back!!! But Will You Be? (Video) 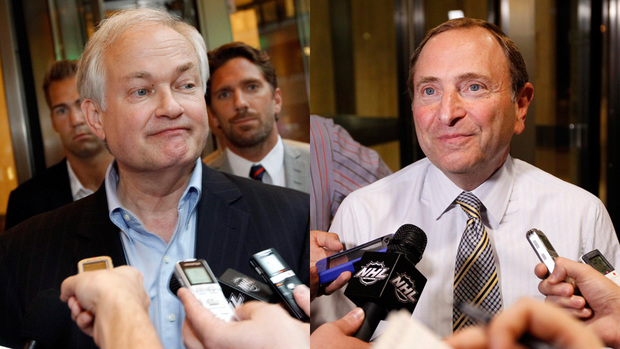 Good news, Florida Panthers fans: your long nightmare is over. The NHL lockout is over. Hockey is back.

As you’ve surely heard by now, in the wee hours of Sunday morning, the NHL and the NHLPA finally reached a tentative agreement on a new CBA that will supposedly have players back on the ice and fans in the seats by January 19.

So what did they finally agree on? Well, those details aren’t official and thus haven’t been made public just yet. But obviously “sources” have been talking “off the record,” and here are some of the highlights they’ve shared (as reported by everybody):

So who are the winners and losers in all of this?

Well, the winners, obviously, are the players…and the owners. Why? Because it looks like they’ll all still be millionaires.

The losers, or course, are the other people who make their living off of hockey. I’m talking about front office staffers, arena ushers, concession stand workers, bar owners, and bar employees—just to name a few. These people need the NHL to actually play games in order to make a living, and they’ve been suffering big time–Do you think the kids of the lady who waits tables at the pub across the street from the arena had a good Christmas this year?

However, shockingly, the NHL and the NHLPA have no official plan to compensate these hard-working folks for the hours and money they lost over the last four months.

Of course, the biggest question mark with the end of the lockout is the reaction of the fans. Will they come back in droves, rabid as ever? Or will they make the NHL pay for their arrogance and stupidity?

If I had to bet, I’d say the fans will be back in the seats for game one. However, there is a movement among some to boycott the league—sort of.

You see, an NHL fan named Steve Chase started a grass roots campaign called “Just Drop It,” which called for fans to boycott one game for every game lost since December 21.

Check out his video:

Now, this campaign calls for not even watching a single NHL game. That’s going to be a tall order for desperate fans. So if you don’t think you can handle that, here’s another idea: watch every single game, but not in person. Instead of buying tickets and $9 beers, go to one of the bars that have been affected by the lockout and spend a bunch of money there. Those are the people who deserve your business the most.  Not the greedy owners and players.