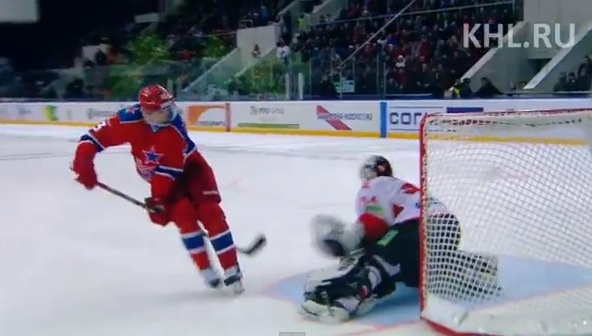 Now that the NHL lockout has ended, many of the league’s players that were playing hockey overseas have returned to North America. Pavel Datsyukof the Detroit Red Wings will soon do the same, but not until the 10-year agreement that was reached on Sunday has been ratified by the Board of Governors and the union.  Until then, Datsyuk will remain in Russia, where he has been playing with CSKA Moscow.

And knowing that his time with the Russian club could end any day now, Datsyuk treated the CSKA Moscow fans to a parting gift.  It came in the form of a behind-the-back shootout goal during a victory against Traktor Chelyabinsk over the weekend.

Datsyuk will finish with 10 goals  and 24 assists during his 30-game stint in the KHL, which has me believing that the CSKA Moscow fans can’t be too happy about the NHL’s return to action.