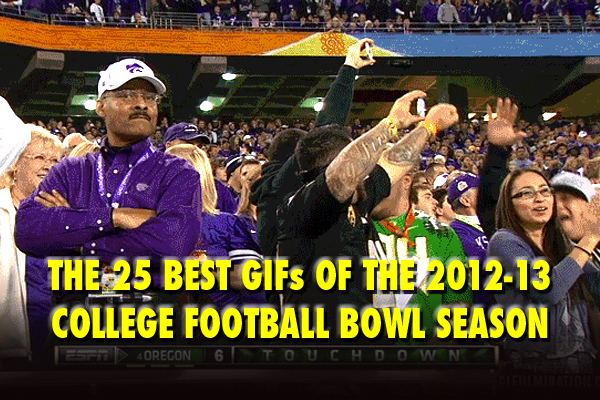 Now that all the Bowls have been played and the college football season is officially over, it’s time for teams to start thinking about next year. But me? I’m not still thinking about this year, and in particular about the highs and lows of the bowl season. And if you’re still stuck on that too, well then you’re in luck. Because today I’ve put together this list of the best GIFs from the 2012-13 college football bowl season. Is it any good? Well, I’ll let you decide, though I will say this: it’s a lot better than the national championship game.

This one is from the fourth quarter of the Cotton Bowl. I guess the ref had an inner ear problem that day.

That guy isn't having any of it. His team was stuck playing Oregon State in the Alamo Bowl, and he wasn't going to pretend like that wasn't a disappointment.

Blocking an extra point attempt: good. Picking up the ball and getting tackled in your endzone for a 1-point safety: bad

It was just that kind of night for Notre Dame at the BCS National Championship Game.

And this pretty much sums up Wisconsin's third consecutive Rose Bowl loss.

With all the recent tragedies involving assault weapons, you might think players would cool it with the gun taunts—especially players at Virginia Tech, a school devastated by one of the worst mass shootings in U.S. history only a few years ago. But no.

Spurrier does have a point. Those chains do seem to indicate the ball was short of a first down. And yet...

Dude, you team is winning the Orange Bowl. Lighten up.

This was early in the game, before Johnny Football had his way with Oklahoma. (Final score: A&M 41, OU 13) Coach Stoops had yet to lose hope.

This fight is from the New Mexico Bowl between Nevada and Arizona. Interestingly, it was probably the most excited game of the entire CFB bowl season.

David Ash had a rough year, and things weren't always looking good in the Alamo Bowl, obviously. But then he pulled it together and threw two TD passes in the 4th quarter to stun Oregon State 31-27.

I have no idea was what going through this poor girl's mind, but she certainly looks uncomfortable. Maybe it was something she ate?

The battle of two teams who blew their chances at the national title game was no contest, and this GIF says it all.

This guy was pumped because he was under the impression that everyone at the Chick-Fil-A Bowl got free chicken sandwiches.

Despite the Bulldogs's inept attempt to recover this blocked punt, they wound up getting two points on this play.

The GODADDY.com Bowl has a lame name and featured two lesser known programs in Kent St. and Arkansas St. However, it was a pretty decent game and it gave us one of the best highlights of the bowl season.

This guy's team kind of phoned it in against Louisville in the Sugar Bowl, so this sentiment is understandable.

Here's a bit of baseball advice for Virginia Tech's Logan Thomas: keep your eye on the ball, son.

I think this guy just took a hit of X.

This isn't actually from the BCS Championship Game. However, I like to imagine that this is what Brent Musberger was going when he was talking about AJ McCarron's girlfriend.

They were pounding the crap out of Notre Dame, and yet they were still taking the game this serious? This, my friends, is what makes Alabama so great.

Heisman Trophy winner Johnny Manziel didn't get to play for the National Championship—this year. But his legend grew greater with a ridiculously dominant performance against Oklahoma at the Cotton Bowl. He also gave us this great GIF featuring him acting like a baller.