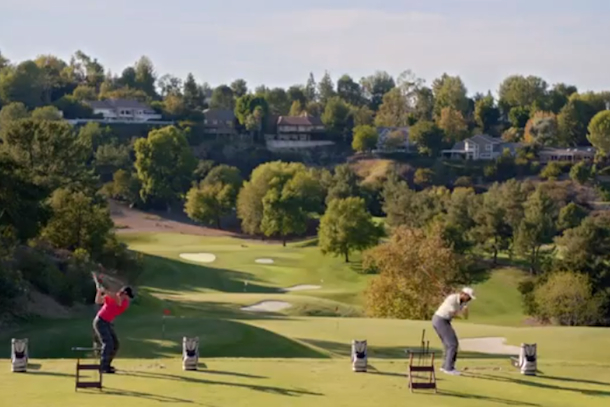 No athlete had a better 2012 than Rory McIlroy.

Okay, fine. LeBron James did. But after LeBron, it’s Rory. The guy won the U.S. Open in 2011 at the age of just 21, then he followed that by winning the 2012 PGA Championship, leading the PGA in earnings, being named the PGA Player of the Year, rising to #1 is the world rankings, and hooking up with gorgeous tennis star Caroline Wozniacki.

Yep, the 23-year-old from Northern Ireland is Nike’s new golden boy, having taken the title from the defamed Tiger Woods. And Nike has decided to play up this “passing of the torch” by doing a commercial featuring their two biggest golf minions—er, I mean, clients.

So how is the commercial? Well, actually, it’s pretty freaking funny—though it does kind of rip off those commercials Larry Bird and Michael Jordan did for McDonalds in the early 90s as part of the “Dream Team” hoopla preceding the 1992 Summer Olympics.

But don’t take my world for it. Have a look for yourself:

Pretty good, isn’t it? In fact, it’s so good that I almost forgot that Tiger Woods hasn’t won a major tournament in four years.