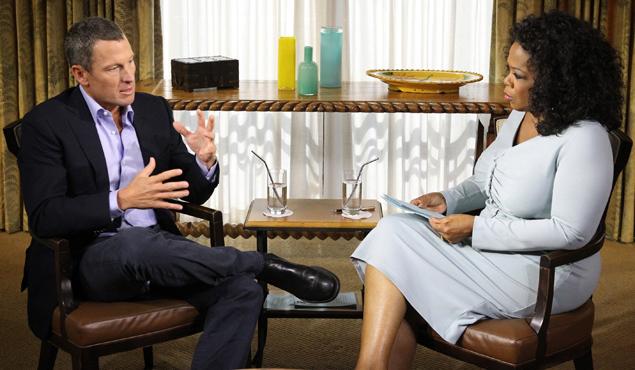 Last night was part one of Lance Armstrong’s interview with Oprah. Of course, you probably didn’t watch it, having lost interest in the spectacle once you heard about that whole “Manti Te’o fake dead girlfriend” scandal over at Notre Dame. So we’ve gone through and selected just the most interesting parts.

We’ll start with a clip of the part everyone is probably most interested in: the actual confession.

From there, Oprah basically just asked questions to try and paint a picture of what Lance did, how he did it, and why he did it.  As you would expect, given that we’ve been hearing rumors that Lance was going to admit to doping for several weeks, the answers are pretty well-rehearsed. Nevertheless, there were a few more interesting tidbits.

Here’s Armstrong on the phony Livestrong hero he created:

Oprah: Was it hard to live up to that picture that was created?

Lance: Impossible. Certainly I’m a flawed character, as I well know, and I couldn’t do that. But what we see now and what’s out there now.

Oprah: But didn’t you help paint that picture?

Lance: Of course, yeah, I did. … And a lot of people did. Listen, all the fault and all the blame here falls on me. But behind that picture and behind that story is momentum. Whether it’s fans or whether it’s the media or whether it’s — it just gets going. And I lost myself in all of that. I’m sure there would be other people that couldn’t handle it, but I certainly couldn’t handle it, and I was used to controlling everything in my life. I controlled every outcome in my life.

And here’s Armstrong on whether he could have won without doping:

Oprah: You said to me earlier you don’t think it was possible to win without doping?

Then Oprah asked Armstrong about his comeback from retirement and his last two times competing in (but not winning) the Tour de France. His answer was pretty stupid:

Oprah: The 2012 USADA report says expert examination established that the likelihood of Armstrong’s blood val use from the 2009 and 2010 Tour De France occurring naturally is less than one-in-a-million. The report went on to say, this is a telling argument consistent with blood doping.

Lance: It’s the only thing in that whole report that really upset me. Obviously, it upset me. But the accusation and the alleged proof that they say that I doped after my comeback, is not true. The last time I crossed the line, that line, was 2005.

Lance: Again, the biological passport was in place, and it was.

Oprah: OK, does that include blood transfusions?

Oprah: So you did not do blood transfusions in 2009?

Oprah: You did no doping or blood transfusions in 2010?

The implication here seems to be, “hey, if I had cheated those times I would have won,” right?

In any case, Oprah then asks Lance if he is a bully:

Oprah: Were you a bully?

Oprah: Is that your nature when somebody says something that you don’t like, you go on the attack?

And then about his ambition to win:

Lance: Yes, but, and I’m not sure that this is an acceptable answer, but that’s like saying we have to have air in our tires or we have to have water in our bottles. That was, in my view, part of the job.

Oprah: Are you saying that’s how common it was?

Lance: Again, my view was that it was. Others will have to attest to that. Again, I don’t want to accuse anybody. I don’t want to make any excuses for me, but that was my view, and I made those decisions.

Oprah: What was for you the flaw or flaws that made you willing to risk it all?

Lance: I think this just ruthless desire to win. Win at all costs, truly. Serves me well on the bike, served me well during the disease, but the level that it went to, for whatever reason, is a flaw. Then that defiance, that attitude, that arrogance, you cannot deny it. You watch that clip, that’s an arrogant person. I go, look at this arrogant prick. I say that today. It’s not good.

So there you have it. Part one of Lance Armstrong’s confession. Now for the big question: what do you think? After all, that’s why he put on this whole thing—to sway public opinion.