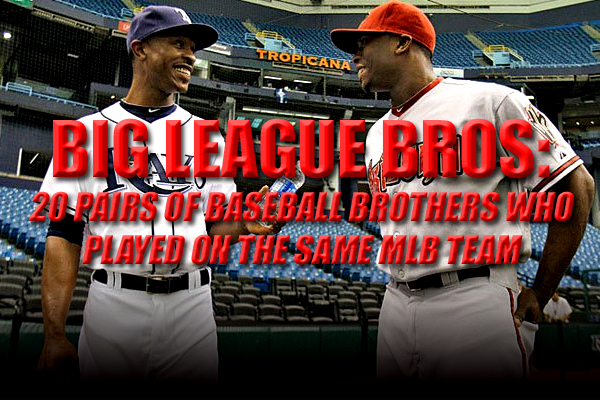 In case you missed it, there was a pretty big trade in the world of baseball yesterday. The Braves sent All-Star second baseman Martin Prado to the Diamondbacks in exchange for center fielder Justin Upton.

That alone would be pretty big news for the middle of January. But what makes this transaction particularly interesting is that, just a few weeks back, the Braves also signed Justin’s older brother B.J. to a five-year, $75.25 million deal. So for the first time, the Uptons will be playing on the same team. And together with 2012 Gold Glover Jason Heyward, they’ll make up what many are already calling the best outfield in baseball.

Of course, I’ll wait until they actually start playing games to make that judgment. What I know for sure right now is that the Uptons have joined an elite and historic club of baseball brothers who played on the same team. And, what’s more, they might just be the best pair yet.

What other brothers have played together on the same team, you ask? Well, here are 20 of the most notable pairs in MLB history. Check them out. 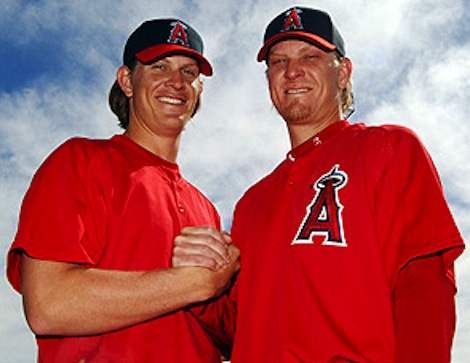 In 2006, Jeff Weaver signed a one-year, $8 million deal with the Angels, with whom his little brother Jered was a hot prospect. In May of that year, Jered made his big league debut, going seven scoreless innings and striking out 5 for the win. He still had to go back to the minors when Bartolo Colon came back from the DL, but his future was bright. Unfortunately his big bro was sucking big time. He was eventually released by the club and replaced by...yeah, that's right, his brother. Don't feel bad for Jeff, though. He rebounded and ended up winning the World Series with St. Louis that year. 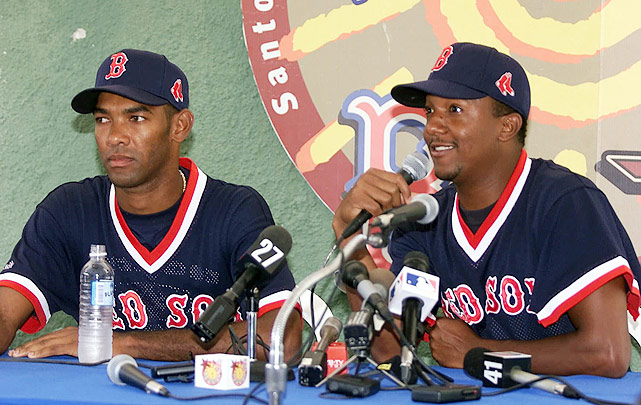 Ramon and Pedro played together on two different teams: the Dodgers in 1991-92, and the Red Sox in 1999-00. Of course, while Ramon had a solid 13-year career, it's the younger Pedro who won three Cy Young Awards and will almost certainly wind up in the Hall of Fame. 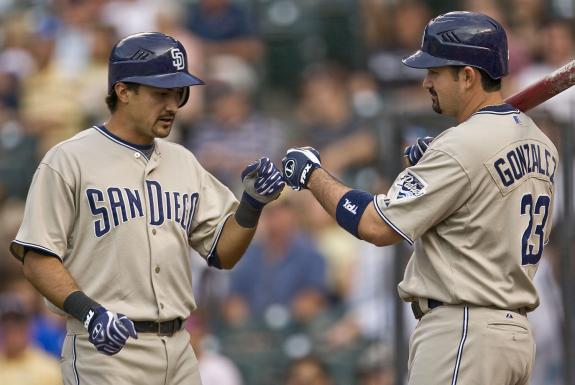 Edgar Gonzalez didn't make his Major League debut with the Padres until one month before his 30th birthday in May of 2008. By then his little brother Adrian, also with the Padres in 2008, was an All-Star and a Gold Glover. 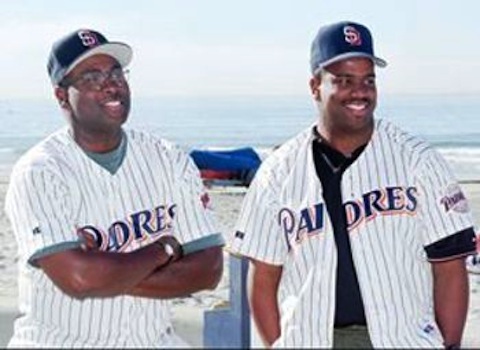 The Gwynn brothers played together, briefly, on the Padres in 1996. Of course, one of them wound up with a .338 career batting average, eight N.L. batting titles, over 3,000 hits, and a membership card for the Baseball Hall of Fame. The other one did not. (Hint: it was Chris.) 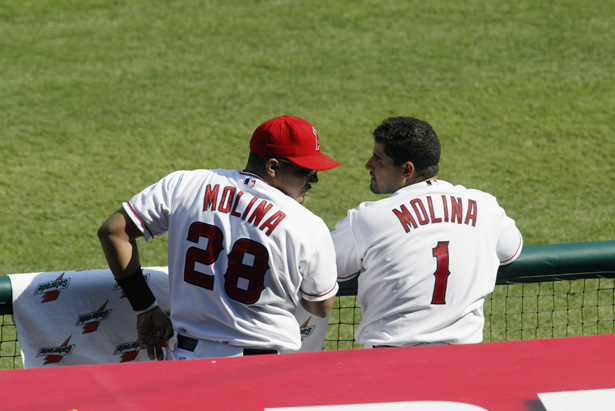 From 2001 through 2005, two of the three Catching Molina Brothers played with the Angels. Bengie was the team's #1 catcher; Jose was the team's #2. I guess neither of them ever wanted to play on the same team as their younger brother Yadier. He's got 5 gold gloves and 5 fielding bible awards, and nobody likes to be outdone by their little brother. 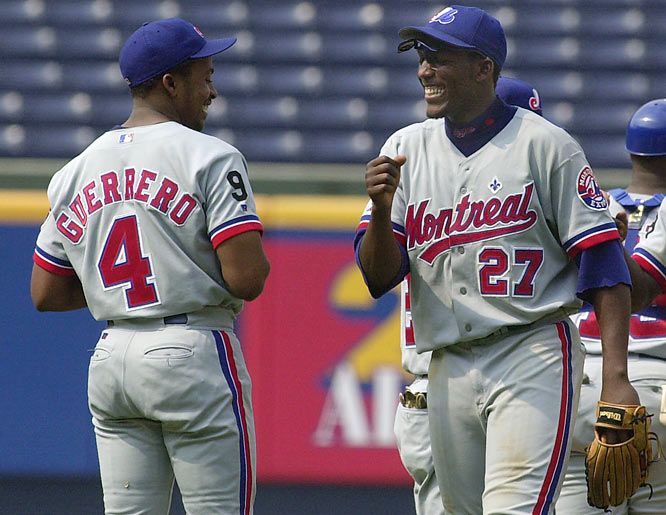 Wilton played on the Expos with his little brother Vladimire from 1998 to 2002. Of course, as I'm sure you are aware, Vlad continued the baseball tradition of being much better than his older brother. He hit 449 career home runs and was the AL MVP in 2004. 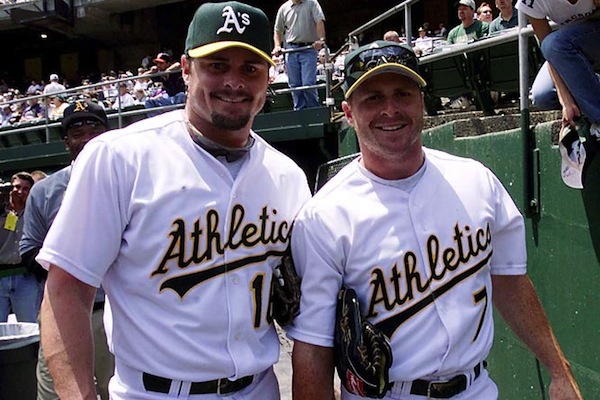 Jeremy and Jason Giambi played together on the A's in 2000 and 2001. I would say the only difference between the two was anabolic steroids, but it turns out that Jeremy also admitted to using them during career. So I guess Jason was just a lot better. 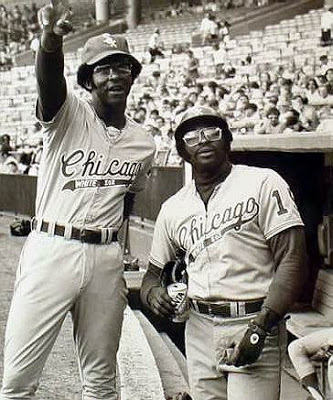 For having played in the deadball era, Dick Allen's numbers were pretty good: .292 average, 351 home runs, 2x AL HR champ, 4x OPS champ, 1x RBI champ, and 1x AL MVP (1972). Basically, he should be in the Hall of Fame—except people thought he was a bad teammate, so he's not. Anyway, Dick's brother Hank wasn't as talented. He was just a journeyman utility guy. But he did get to play with his brother on the White Sox in 1972-73. 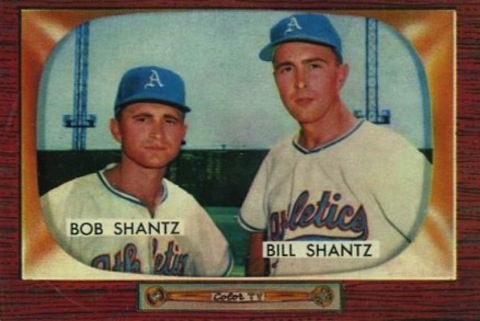 Billy Shantz was a journeyman catcher who spent only three seasons in the majors. However, all three of them were with the same team as his more famous brother, Bobby Shantz: 1954 and '55 with the Athletics, 1960 with the Yankees. Bobby, interestingly enough, was a pitcher, which is probably why he was able to get his teams to sign his brother—pitchers often can influence who catches them. And Bobby was good, too. He was a 3x All-Star, and 8x Gold Glover winner, a World Series Champ, and the 1952 AL MVP—though not the Cy Young winner...because the award hadn't been invented yet. 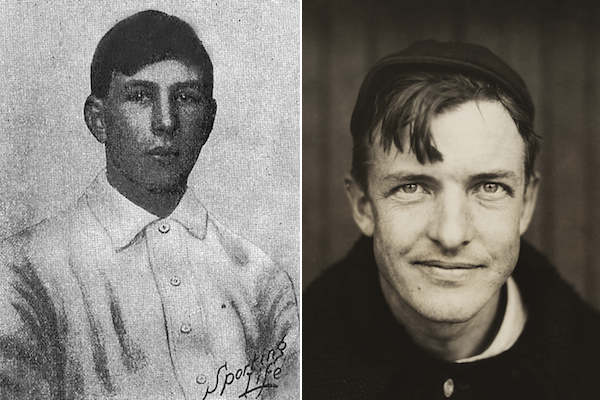 Though he pitched in a different era (from 1900-1916), Christy Mathewson is still regarded as one of the best pitchers in baseball history. His 373 career wins is 3rd all-time, his 2.13 career ERA is 8th all-time, his 1.058 career WHIP is 5th all time, and he pitched two no-hitters. Oh, and he was one of the "first five" inaugural member of the Hall of Fame. Christy's brother, Henry, was also a pitcher, and they both played for the Giants in 1906. He just wasn't as good as his brother at anything—not at pitching, and not at dying of tuberculosis. Oh sure, they both died of tuberculosis. Pretty much everyone did back then. But Henry succumbed at the age of 30. Christy lasted until he was 45. 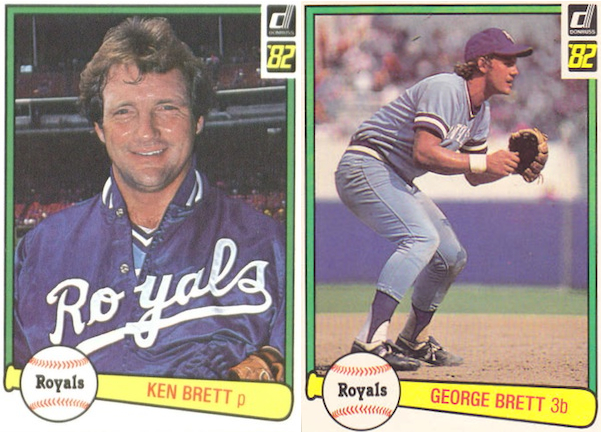 Ken Brett had a solid 14-year MLB career as a pitcher with a 3.93 ERA and 807 Ks. Of course, when your brother is a member of the 3,000 hits club and a member of the Hall of Fame, nobody remembers you. Anyway, the two played together briefly with the Royals in 1980 and 1981. (Obviously Ken's 1982 baseball card was a little premature.) 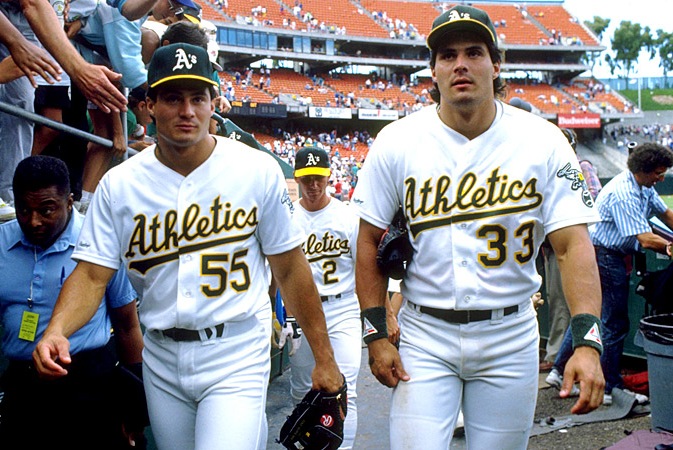 The Canseco brothers both played for the A's in 1990. Of course, these days Ozzie's main gig seems to be pretending to be his brother at promotional events. (They are twins, you know.) 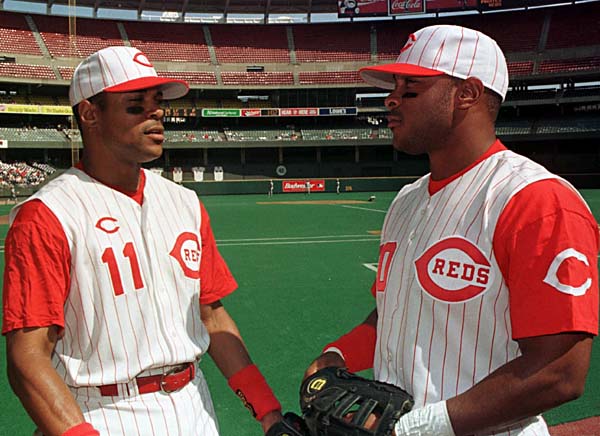 First baseman Stephen Larkin had a career BA of .333, which is a full 8 points higher than his brother Barry. So why is Barry in the Hall of Fame while Stephen is not? Because Stephen only played in one game. Ever. He went 1 for 3. But here's the really crazy thing: in that one game in 1998 in which the Larkin Brothers made up one half of the Cincinnati Reds' infield, another set of brothers made up the other half...

The Boone brothers played together with the Cincinnati Reds in 1997 and in 1998 until Aaron was traded to the Yankees. And in one game in 1998, they made up one half of the infield (second base and third base) and the Larkin brothers made up the other half. You think that will ever happen again? 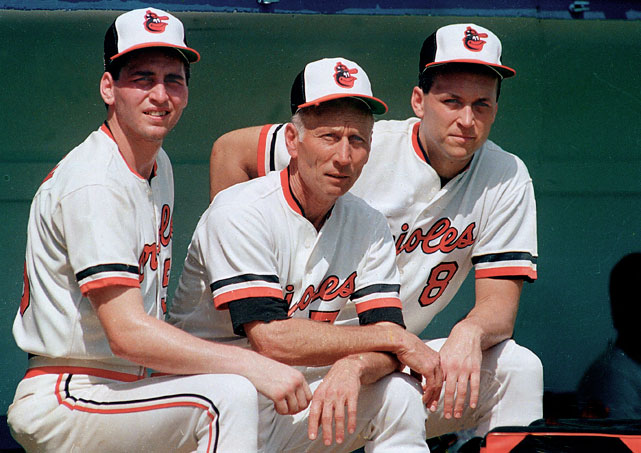 Poor Billy Ripken. He had a decent career in the big leagues, bouncing around from team to him and hitting .247 with 20 HRs and 229 RBIs. His big brother Cal, though, got his dad's name and most of the family's genetic baseball talent. (You know about Cal Ripken, Jr., right?) 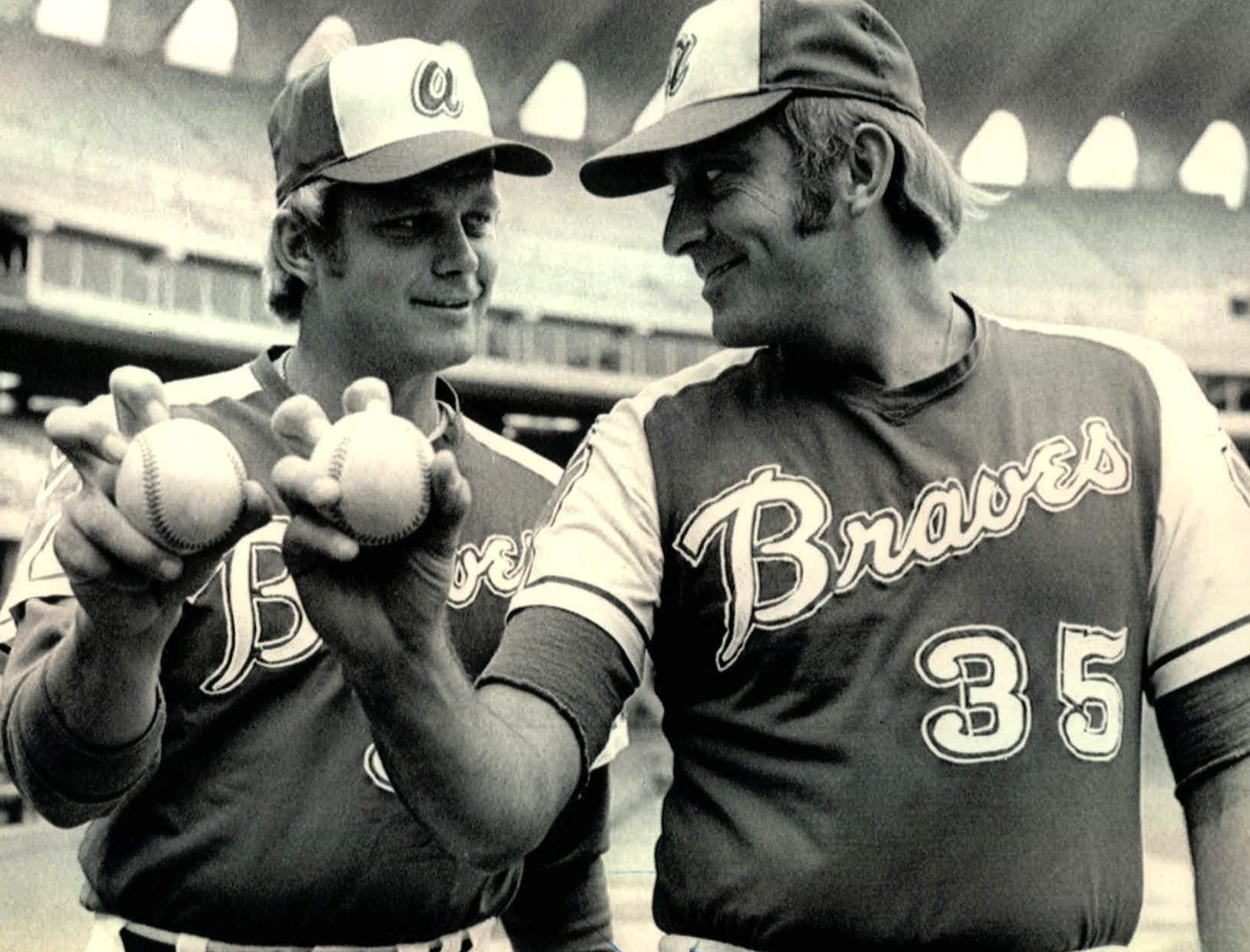 Phil Niekro was a famous knuckleball pitcher in the 60s, 70s, and 80s. So was his brother, Joe. In fact, they have eerily similar career numbers. However, Phil struck out a lot more guys, and that got him into the Hall of Fame. Joe will just have to settle for the fact that he got to pitch in the same rotation as his brother with two different teams: the Braves in 1973 and '74, and the Yankees in 1985. 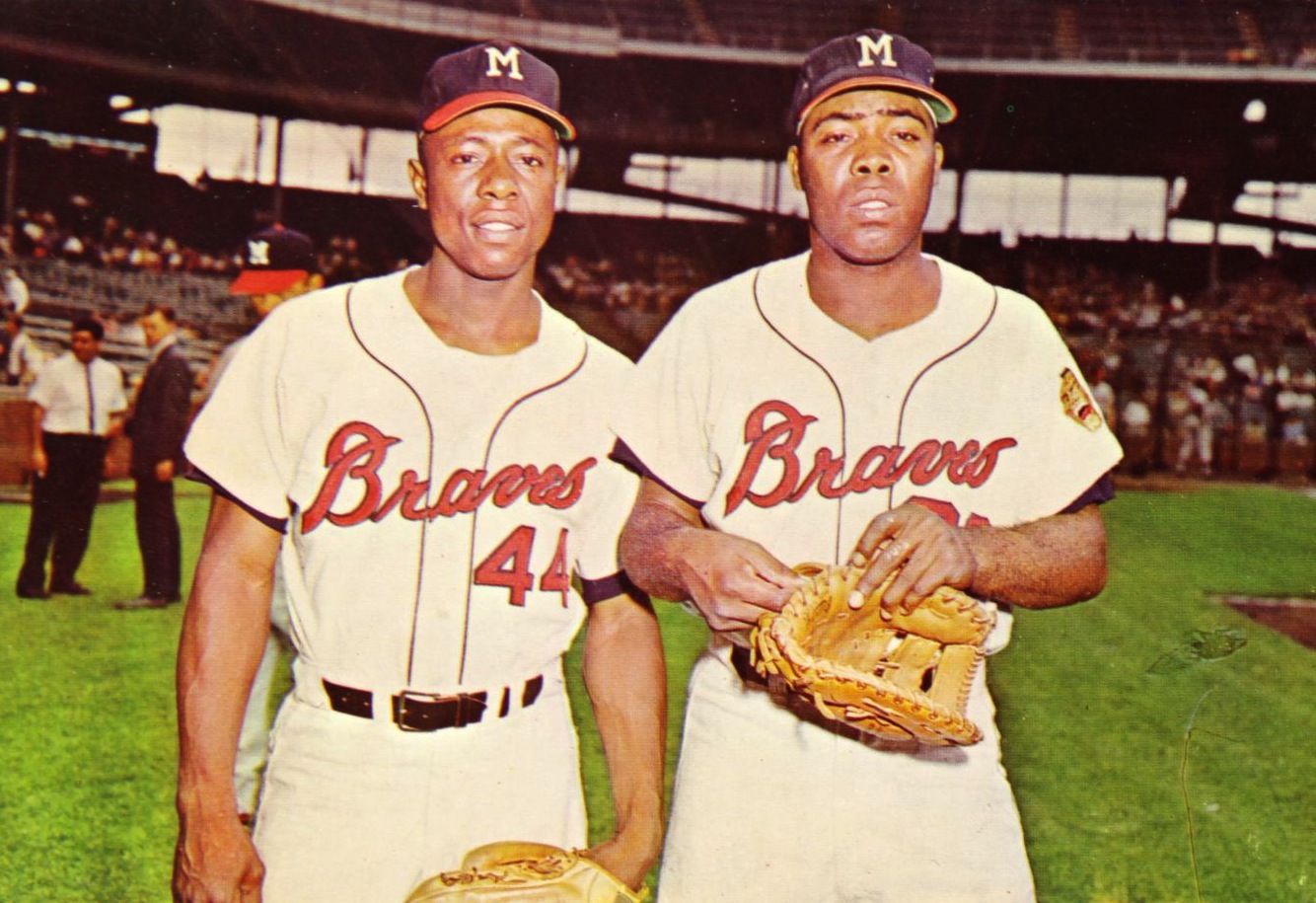 Hank Aaron and his brother Tommie both played for the Braves from 1962-71, both in Milwaukee and Atlanta. Together they hold the record for most career home runs by a pair of siblings with 768. Of course, Tommie only his 13 of them. 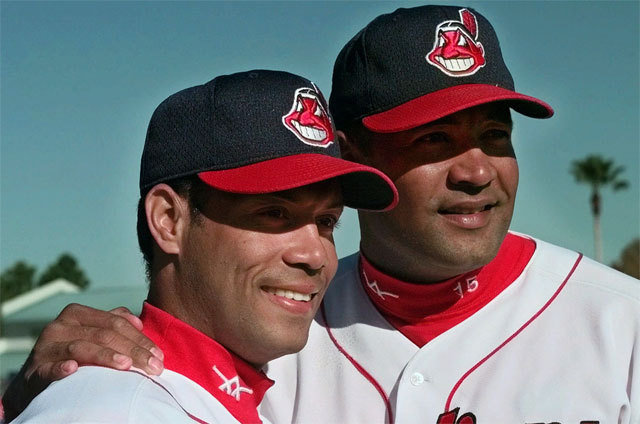 Hall of Famer Roberto and his older brother Sandy played on the same team not once, not twice, but three times. They shared time together with the Padres from 1988-89, the Indians from 1999-00, and the White Sox from 2003-04. If anyone can challenge the Uptons for the title of most talented pair (in which both are good if not great rather than just one) of brothers to play on the same team, it's these guys. Also in the mix would be the Niekros and the Molinas. But my gut feeling, without overanalyzing it, is that the Alomars would be #1. 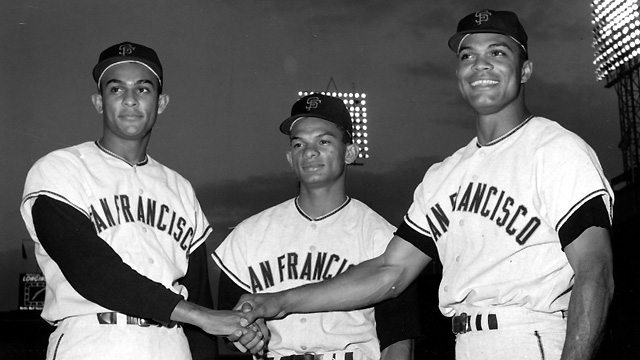 Man, forget about living up to your big brother. Imagine having to live up to freakin Jesus. Anyway, in 1963 these three made up the entire outfield for the San Francisco Giants. I'm willing to be we'll never see that again. 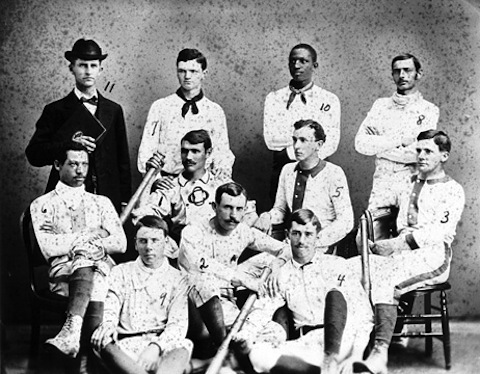 Okay, quiz time: who was the first black man to play for a Major League Baseball team? What's that? Jackie Robinson? Nope. He was the first in the modern era, but the third overall. The very first black MLB player ever was Moses Fleetwood "Fleet" Walker. The second was his brother, Welday. Fleet played catcher for the Toledo Blue Stockings of the American Association in 1884, making his debut on May 1. Later that season, Fleet's brother Welday joined the team and played 6 games.After the 1884 season, the Toledo Blue Stockings folded, and Fleet went back to the minors. Five years later, the National League and the American Association both adopted Jim Crow and officially banned black players. So you learned something today, huh?