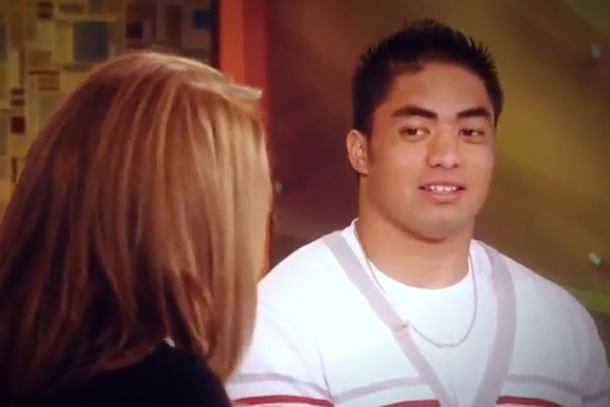 So yesterday was Manti Te’o‘s big interview with Katie Couric (Hey, Oprah, what happened?). It was the first time he or his family had appeared on TV since Deadspin broke the news about his fake dead girlfriend, and overall I think he comes off as pretty believable.

How so? Well, in one five minute segment, we get three key pieces of information.

First, Katie asks the question many have wondered: is Manti gay? He answers with an emphatic no. But of course, what did you expect? Even if this was a giant conspiracy to cover up the fact that he’s gay, do you think a guy who would go through that much trouble would now just be like, “oh yeah, sure, I’m hot for dudes”? Please.

Moving on, Katie then asks, with so many girls at Notre Dame to chose from, why did he not just get a “real” girlfriend? And as Manti goes about explaining his connection to the fictional Lennay, he brings up his Mormon faith, unintentionally explaining another crucial point. Namely, as a devout Mormon, it almost didn’t matter if he was in the same city as Lennay. Either way, he’s not supposed to get busy with her…or dance with her…or make out with her.  No, or very little, physical intimacy until you’re married—that’s how Mormons roll. In fact, that’s pretty much what the entire Twilight series is about, in case you didn’t realize. Thus, at places like BYU the kids go on “group dates” that barely resemble what many of us would call a date. So why didn’t Manti want a “real” girlfriend? Because it didn’t really matter. If anything, a telephone/internet girlfriend is better because there would be less temptation to be naughty.

Then, third, Manti gives an account of the lie that really got this out-of-control snowball of a story rolling. You see, part of the reason the story of Manti’s dead girlfriend went national was that his father and brother would talk to any reporter who called their house. The New York Times, a kid from a local high school newspaper—anybody. And they were basing all of their stories on a lie Manti told his dad—that Lennay came to Hawaii and the two finally met in person. Manti explains that he told his dad that because he was embarrassed, and that’s pretty believable if you also accept what I just said above.

So, like I said, I’m finding Manti’s “I had no idea” story kind of believable at this point. But here, check out the five minutes clip for yourself:

And if you’re really interested and have a lot of time to spare today, you can check out the entire interview below. You’ll find that Katie Couric is pretty tough on the linebacker at times: