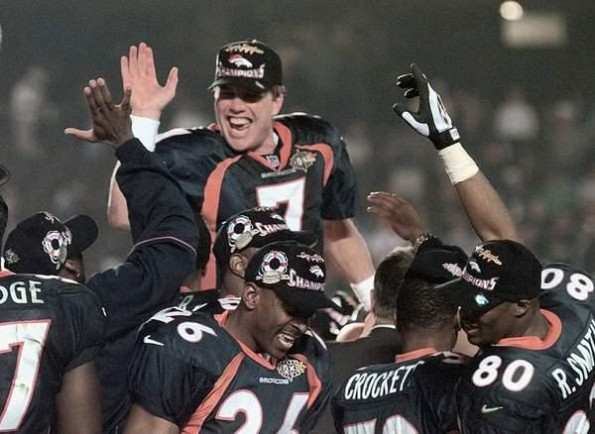 It was on this day in 1998 that Super Bowl XXXII was held at Qualcomm Stadium in San Diego, California.  The Denver Broncos defeated the Green Bay Packers 31-24 to win their first of back-to-back Super Bowl titles.

The Broncos rode San Diego native, running back Terrell Davis to victory as he was the centerpiece of the offense.  Davis ran for a Super Bowl record three rushing touchdowns to go along with 157 rushing yards.  He also added two receptions for eight yards and was named the game’s Most Valuable Player.  This was one of the biggest upsets in Super Bowl history as the Packers entered the game as defending champions and 11-point favorites.

It took him 15 years, but Denver quarterback John Elway finally got the Super Bowl championship he waited for his whole life.  After losing the big game three times earlier, Elway would win back-to-back Super Bowls in his final two seasons before retiring on top of the football world.