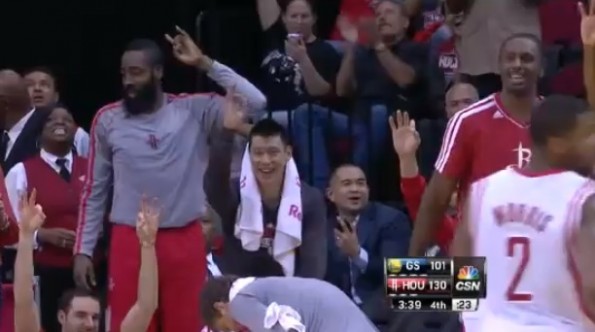 The Houston Rockets defeated the Golden State Warriors by a score of 140-109 last night.  Nearly half of their points (69, to be exact) came from beyond the arc, as the Rockets tied an NBA record by connecting on 23 three-point attempts during the contest.

Leading the way was Jeremy Lin, who made a career-high five three-pointers in the game.  Next was Chandler Parsons and James Harden, who each had fourtres.  Then there was Marcus Morris with three, James Anderson and Toney Douglas with two each, and Partick Patterson, Patrick Beverley and Donatas Motiejunas all added singles.

For the mathematically impaired, that equals a total of 23 three-pointers, and you can watch each of them fall through the hoop in the video below.

In case you were wondering, the Orlando Magic are the only other team to hit 23 three-pointers in a single game, doing so back on January 13, 2009.  As for the Rockets, they could have had the record all to themselves, as Beverley was looking to connect on the team’s 24th three-pointer with 34.1 seconds remaining in the game, but he was fouled hard on the play by Draymond Green, resulting in a flagrant 2 and an ejection being called on the rookie forward from Michigan State.

So yeah, the Magic might want to send Green a few free tickets to Disney World.  I think he earned it.