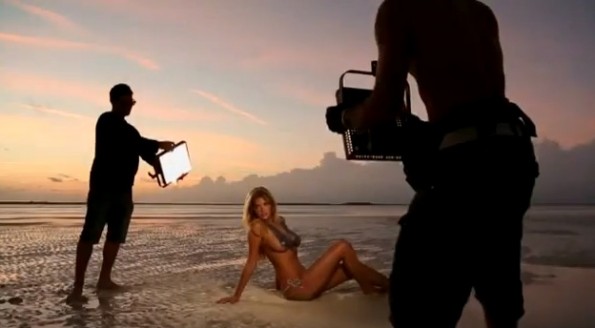 The 2013 edition of the famous Sports Illustrated Swimsuit Issue hit newsstands this week, and just like last year, the unparalleled Kate Upton is on the cover.

Upton, of course, is just 20 years old, but over the last two years she’s become an international superstar and one of the internet’s most popular women. (That footage of her dancing behind the scenes at a Terry Richardson photo shoot certainly helped.) Now she’s just the thirteenth woman to make the cover of the Sports Illustrated Swimsuit Issue more than once, and you have to figure she’ll make the cover one or two more times.

That being said, Upton isn’t only on the cover of the magazine. She can also be found on the inside pages. And in this year’s issue, she recreates Daniela Pestova’s 2000 SI Swimsuit cover—only, you know, without the swimsuit.

That’s right. In this issue, Kate dons the painted on bikini. And in case the mere idea of that doesn’t pique your curiosity, here’s a behind-the-scenes video of the shoot:

Not bad. Not bad at all.