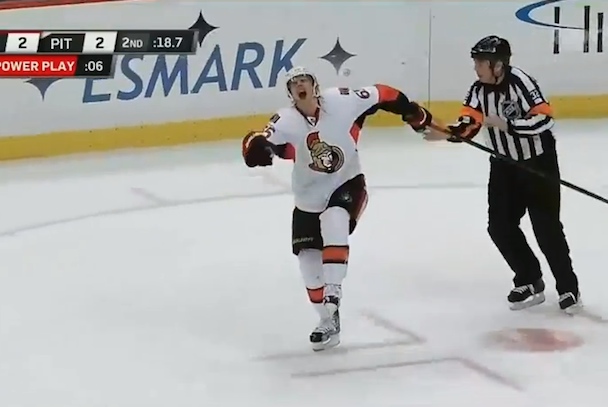 Well, here’s some terrible news for the Ottawa Senators and pretty much anyone who enjoys watching exciting and creative hockey: the reigning Norris Trophy winner, Erik Karlsson, is sidelined indefinitely with a lacerated Achilles tendon.

Going for the puck in the corner of his own zone last night against the Penguins in Pittsburgh, Karlsson got pinned against the glass by the infamous Matt Cooke. Unfortunately, in checking Karlsson, Cooke’s left skate came up off the ice a bit and caught Karlsson on the back of his left ankle. Afterward, Karlsson tried to get up, but as soon as he put weight on it the guy screamed in agony.

Later the Sens tweeted that Karlsson’s achilles was sliced and that he’d have to undergo surgery.

Of course, because the incident involved Matt Cooke, a guy who has been suspended multiple times and who played a key role in ending the career of Boston’s Marc Savard, everybody has been debating whether or not there was intent to injure. However, while Senators coach Paul MacLean suggested that it might have been intentional, pretty much every hockey expert I have seen or read thinks it was just a freak thing. These folks point out that players raise their skates off the ice like that all the time, and there’s no way you could say it was intentional.

The NHL agrees. League discipline czar Brendan Shanahan announced today that there would be no disciplinary actions taken toward Matt Cooke.

So what do you think—is that the right call?

Take a look at the video and judge for yourself: