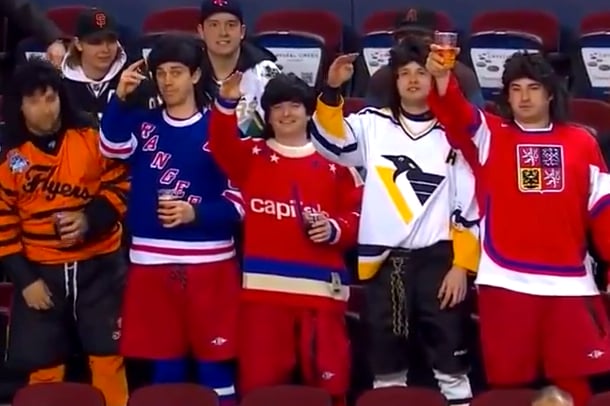 Last night the Dallas Stars, the only NHL team in Texas, traveled north to the Texas of Canada, Alberta, to take on the Calgary Flames. Of course, being Canadians, the Flames’ fans were well aware that they were getting one of their last chances to watch one of the most prolific point-produces in NHL history: Jaromir Jagr. And one group of Calgarians paid tribute to Jagr in a very special way.

Six men came to the game together dressed collectively as the evolution of Jaromir Jagr. Each wore one of the jerseys Jagr has worn over the years—Penguins, Capitals, Rangers, Flyers, Stars, and Team Czech Republic—and, of course, each one donned a gorgeous mullet wig.

As you can see, 41-year-old Jaromir got a pretty big kick out of it. And why not? That tribute took a lot of work to put together. I mean, you don’t just pick up mullet wigs at your corner store.