The 16 Female Drivers to Race in NASCAR’s Top Series 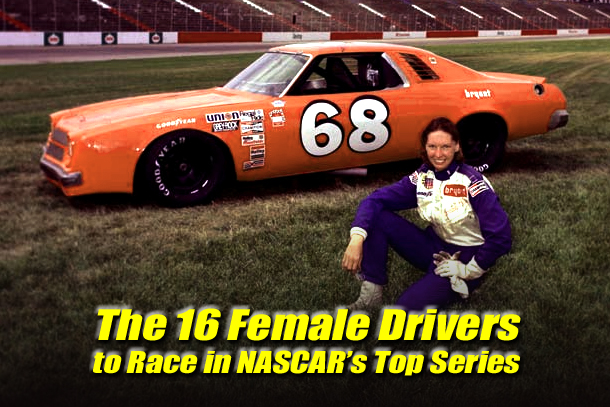 I know sports fans—and race fans in particular—are growing a little tired of hearing about Danica Patrick. The chorus these days seems to be, we get it, she’s attractive, but where are the results?

However, we all need to be reminded that Danica is not the first female driver in the history of NASCAR. She’s not the second, the third, the forth, or the firth. She is, in fact, the 16th female driver to race in the sport’s top series (now called the Sprint Series).

So today, in light of Danica’s achievement in Daytona, we’re going to take a look at all 16 female NASCAR drivers. 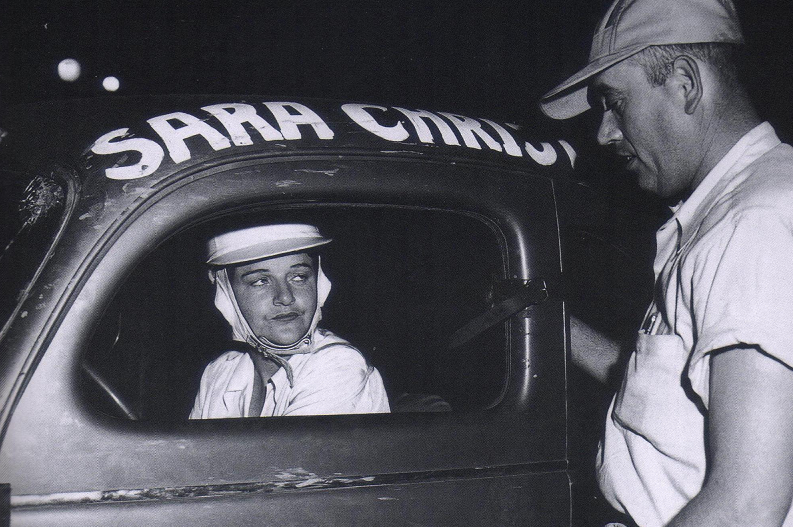 The first woman to race in NASCAR's top series actually did so quite a long time ago. Georgia native Sara Christian started 6 races during NASCAR's inaugural 1949 season, including the very first race ever. She made 2 top-10 finishes and wound up in 13th place overall. Then she made one more start in 1950, finishing 14th at the Hamburgh Speedway, and after that she retired. So you see, women were involved in NASCAR from they very beginning. Who would have thought? 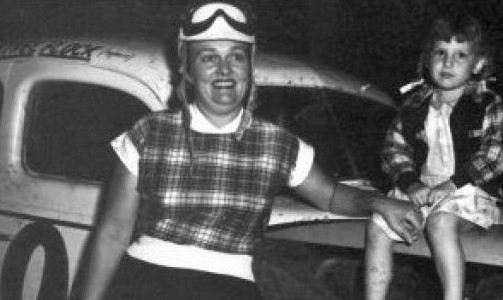 Ethel Mobley also raced in NASCAR's inaugrual 1949. However she only made two starts and finished 52nd in the points standings. Of course, before in one of her two races, she did get to race against her brothers in her first event—NASCAR pioneers Tim, Fonty, and Bob Flock. She actually beat Fonty and Bob, too, by finishing 11th. 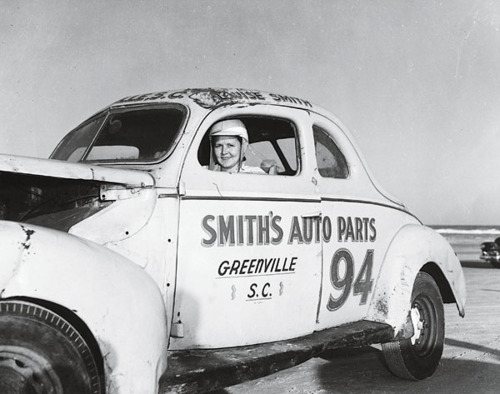 Louise Smith also competed in the 1949 NASCAR season along with Sara Christian and Ethel Mobley. In fact, she also appeared in the 2nd and 4th races of the inaugural season, meaning those two events actually had three female drivers. This kind of changes you perception of the barrier women face in motor sports, doesn't it? It's not so much that there isn't one. Obviously there is. But apparently that barrier has been a little porous from the get-go. 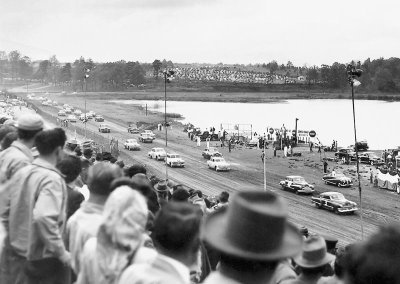 NASCAR saw it's fourth female driver in just its second season in 1950. Ann Chester started the 6th race of that season in June at the Vernon Fairgrounds, then she started the 12th race of the season at Hamburg Speedway in August. She only finished one of those races, but that's still one more NASCAR finish than me, so I have to tip my hat to her. 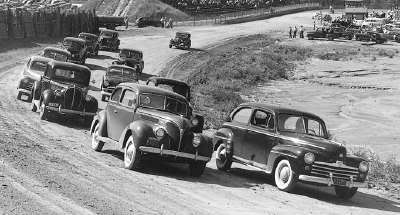 The 1950 season also saw Ann Bunselmeyer become the firth female driver in NASCAR history. She started the 16th race of the season at Vernon Fairgrounds in Vernon, New York. Driving a Packard, Bunselmeyer finished a respectable 18th in a field of 29. 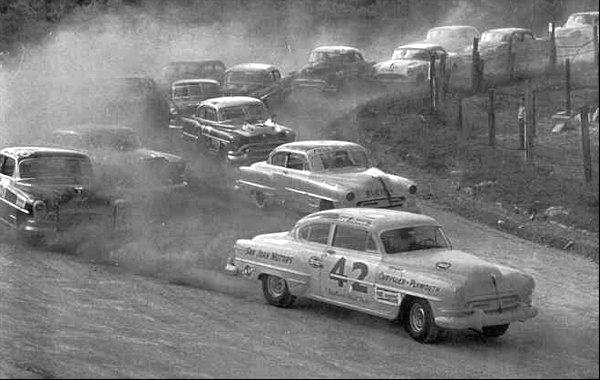 Now we jump ahead from 1950 to 1954, when Marian Ragan became the 6th female NASCAR driver. According to ESPN, Ragan made one start that year. However, I was unable to track her stats down, so we'll have to take their word for it.

The next female NASCAR driver after Marian Ragan was Goldie Parsons...probably. You see, while that same ESPN article referenced in the previous entry says Parsons appeared in two races, with the first coming in 1955, the only record I could find for Parsons was a race in 1965, when she supposedly drove the #89 car (pictured here) in one race. That race was supposedly held at the Dog Track Speedway, which would mean it was either the Mayock 300 or the Tidewater 300. And supposedly, whichever one it was, she finished 14th and won $100. However, I can't seem to find any more info on old Goldie. (Is that name meant for NASCAR or what?) So if you fancy yourself a NASCAR historian, please chime in. 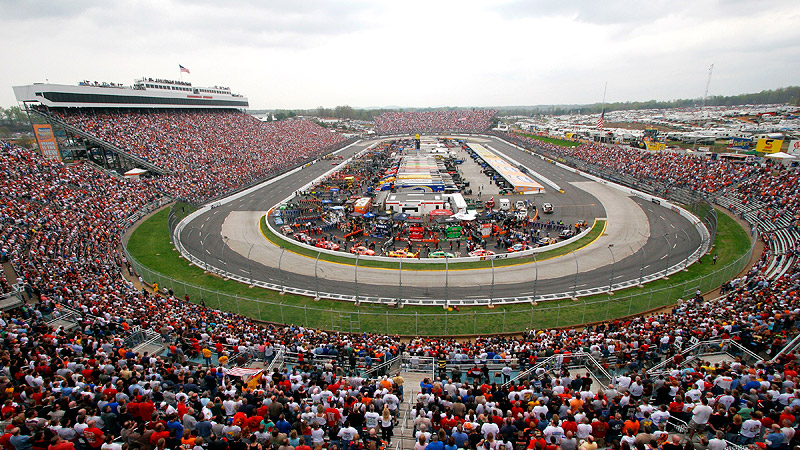 Now, FiFi Scott I'm pretty sure about. She definitely made two starts in the 1955 season. One was race no. 13 at the Arizona State Fairgrounds, and the other was at race no.15 at Martinsville (pictured here). In that second race, Scott finished 13th and won $25. Of course, there was only 19 drivers in the field, and everyone got at least $25. 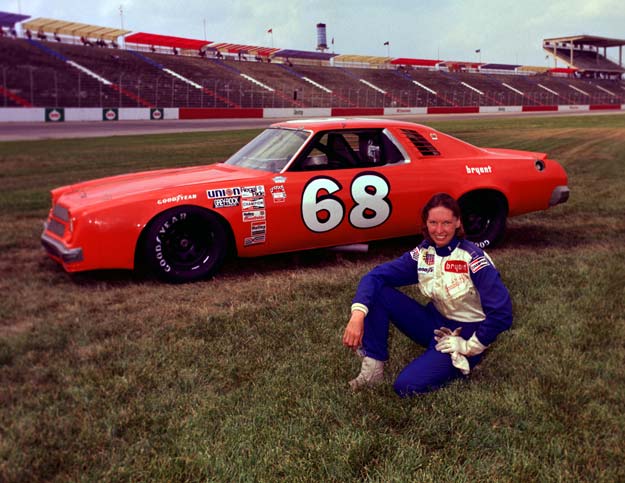 If your looking to blame someone for opening the door to more women in North American motor sports, blame Janet Guthrie. After obtaining a degree in aerospace engineering from the University of Michigan, Guthrie naturally got into race car driving. She made the first of her 33 NASCAR starts in 1976, and became the first woman to compete in a superspeedway event and the first to compete in the Daytona 500—where she finished 12th in 1977. In all, Guthrie started 2 Daytona 500s, had 4 top-10 finishes, and won about $84,000. Oh yeah, and she also raced in 3 Indy 500s...so she was the first woman to compete in North American racing's two biggest events. 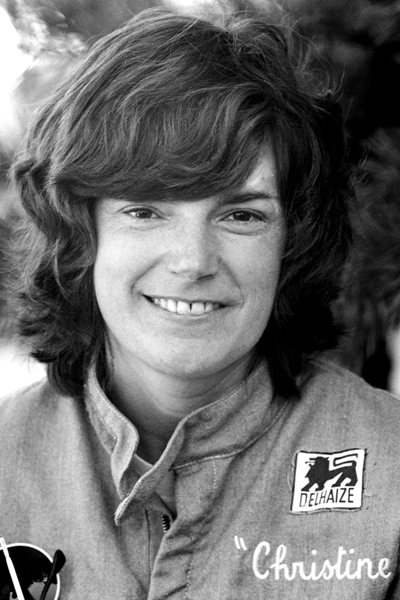 Belgium's Christine Beckers became the 10th female driver in NASCAR history when she joined Janet Gurthrie at the Firecracker 400 at Daytona, the 16th race of the 1977. She finished just 37th, however, getting knocked out after just 33 laps. Interestingly, Guthrie and Beckers weren't the only women at the 1977 Firecracker 400... 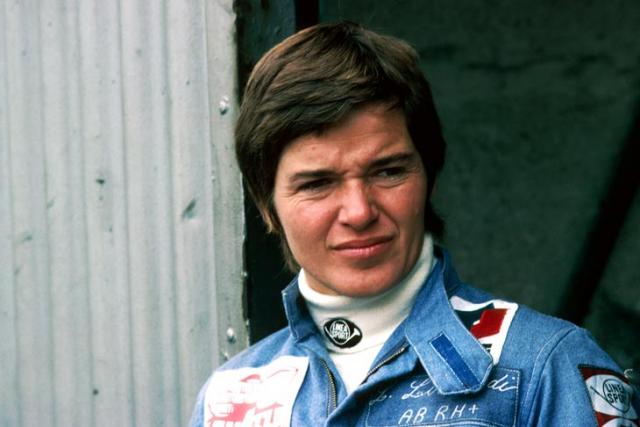 Lella Lombardi, an Italian who made history in Formula 1, started in one NASCAR event in 1977: the Firecracker 400. In that race she was the best of the three women, completing 103 laps and finishing 31st in a field of 41. 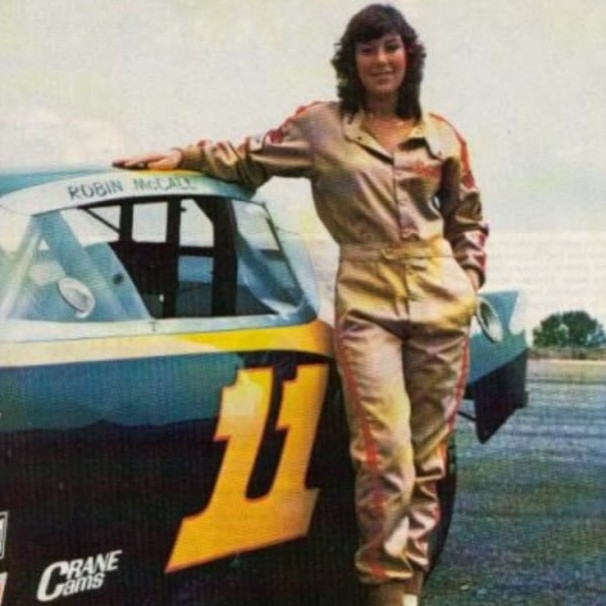 In 1982, Robin McCall became the 12th female driver in NASCAR history. She made two starts that year—both at Michigan International Speedway—finishing neither and placing 29th and 33rd. 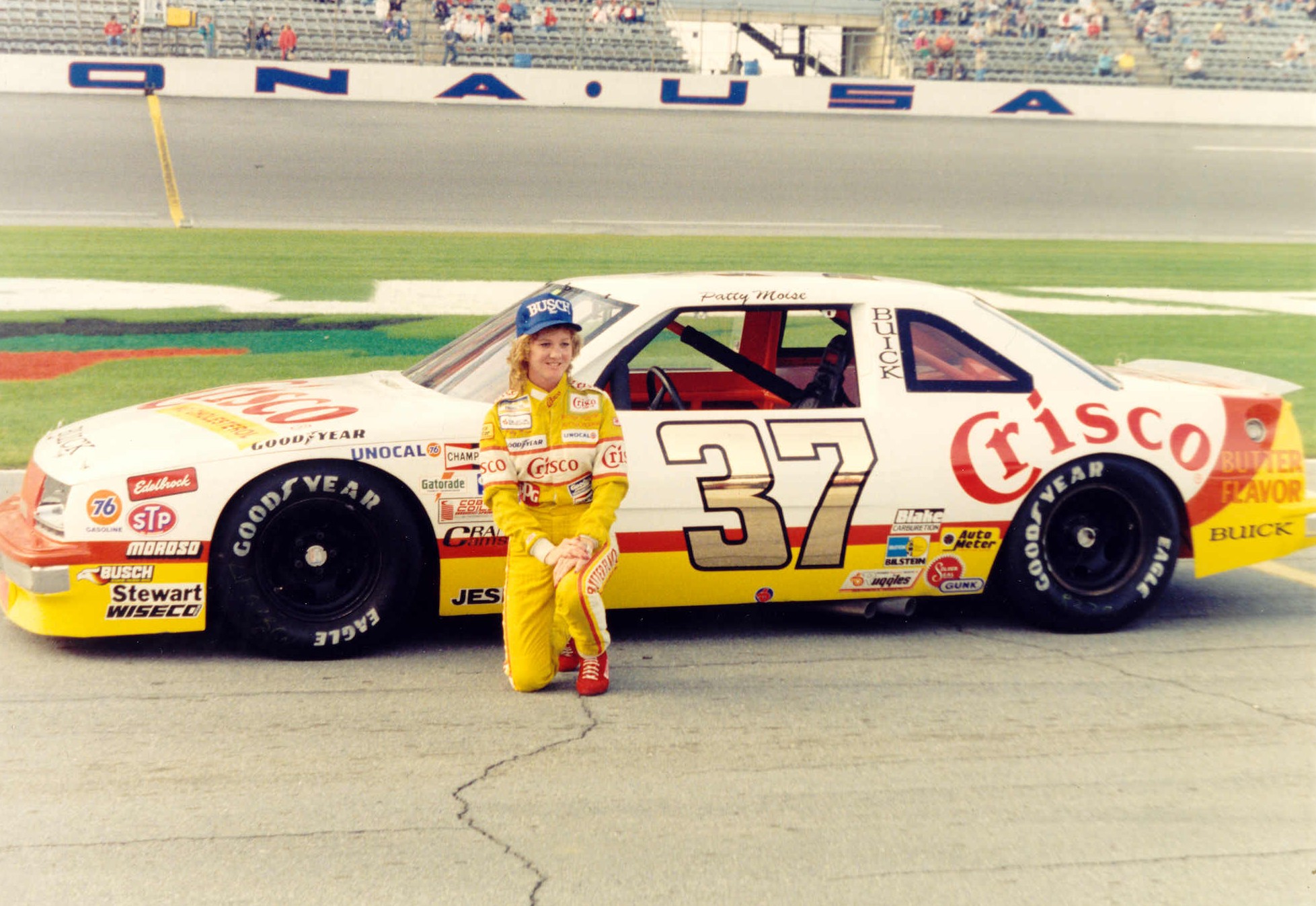 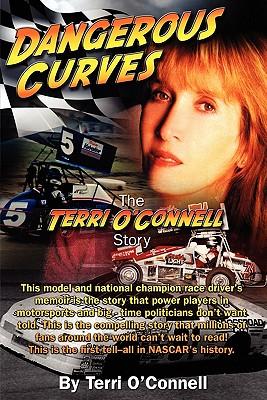 Alright, this one is kind of weird. You see, technically, Terri O'Connell wasn't a woman when she made her one and only NASCAR start at the 1990 Goodwrench 500. Yep, that's right. Back in 1990, she was a he, and his name was J.T. Hayes. At the Goodwrench 500, Hayes started 38th and finished 38th after completing only 10 laps. In 1994, though, Hayes had sex reassignment surgery and became Terri O'Connell. I guess technically this shouldn't count as a female driver, since at the time Terri was biologically male. But he felt like a woman on the inside, and I just couldn't leave out the first and only transgendered driver in NASCAR (that we know of). 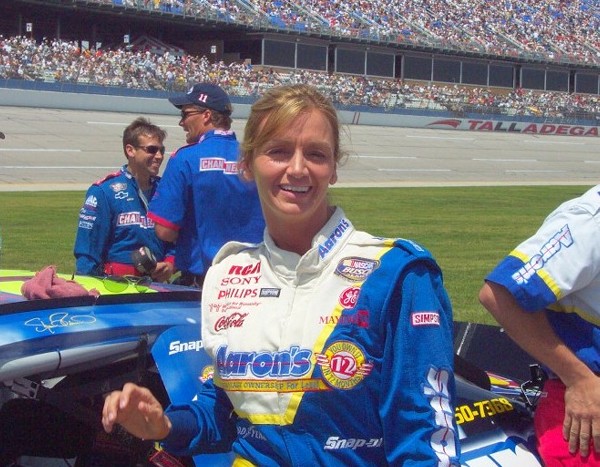 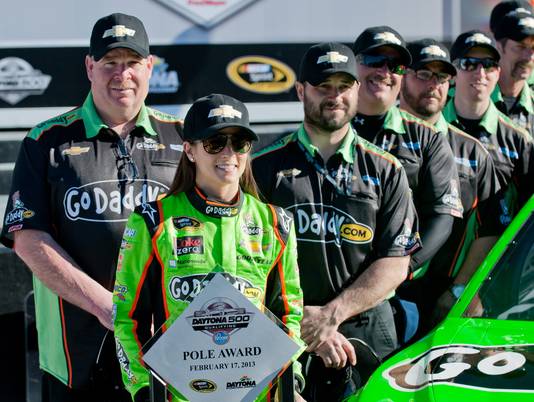 After making history in IndyCar, Danica Patrick became the 16th female driver in the history of NASCAR's top series last season. Of course, she split time in 2012 between the Spring Cup and the Nationwide Series, making 10 starts in the former and 33 in the latter. And in those 10 races, Danica didn't have one top-10 finish. However, she only had two DNFs, and she did make one appearance in the top 20—which isn't horrible considering she'd just made the switch to stock cars from open-wheel racing. Now she's made the pole position for the Daytona 500, which runs this weekend. Will she make history and become the first woman to win a NASCAR Sprint Cup event? You'll have to watch to find out.