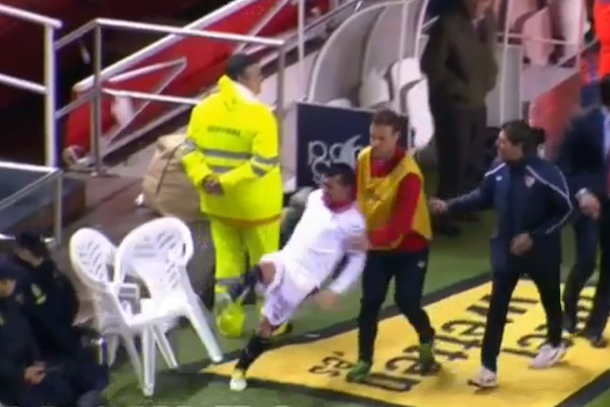 There was a lot at stake for Sevilla FC in the second leg of their Copa del Rey pairing against Atletico Madrid. If they won the game by two goals, that would have put them in the finals against Real Madrid. And since Real Madrid will almost certainly go straight through to the main draw of the Champions League based on their standing in La Liga, that means that even if Sevilla lost the final, they would have earned a berth in the Europa League—something they are not going to earn based on their standing in La Liga.

Unfortunately for Sevilla, they didn’t win the second leg of the semifinal against Atletico Madrid. They tied 2-2, thus losing by the aggregate score of 4-3. And let me tell you, a few of the Sevilla players took it hard. In fact, two of them—Gary Medel and Geoffrey Kondogbia—were very deservedly sent off toward the end of the match, leaving their team to finish the game with just nine players.

Medel got sent off after a hard foul. That earned him an automatic one-game ban. But then he refused to leave the field, yelling at the referee. So he had to be escorted off. Then, on the way, he took out his frustrations on a helpless plastic lawn chair. And when he kicked that, a piece broke off and hit a police officer right in the face.

What did Kondogbia do? Oh, the usual—he stomped on the crotch of an opposing player, earning himself a red card plus a four-game ban. Take a look:

So, yeah, Sevilla weren’t exactly taking the loss all that well on this occasion.