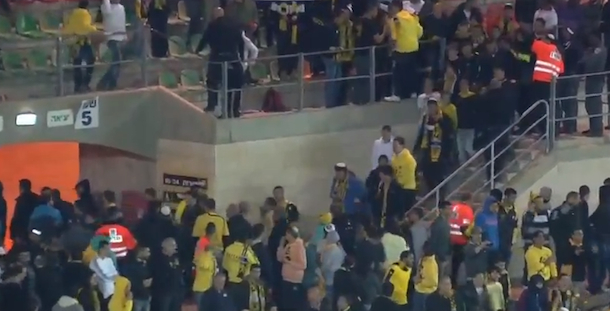 Racism is a big problem in soccer. You no doubt already know that if you watch SportsCenter (or SportsCentre, if you’re Canadian) on a daily basis, or if you are a regular reader of TotalProSports. However, if you’re like me, you probably thought this racism was mostly limited to European soccer hooligans.

Unfortunately, it turns out that racism in soccer is far more pervasive than that. Pretty much anywhere the game is played, there are ignorant and intolerant fans looking to express their own feelings of inadequacy and smallness. And that includes Israel.

That might seem strange to you, given that Jewish people around the world have long been subjected to racism. Maybe you think that people who are unjustly discriminated against would be more judicious in their treatment of others. But alas, that view is a little naive. Just because people are racist toward you, that doesn’t mean you’re not racist toward others.

Take supporters of Beitar Jerusalem F.C., for example. This Israeli Premier League soccer club has a fan base that has long been associated with far-right nationalist politics in Israel, and some of these fans are extremely racist. As a result, these fans are widely despised by every other club in Israel, not to mention by the general population.

How bad are they? Well, back in December, they taunted a nigerian-born player on an opposing team with howling noises and racist chants. After this, the club made overtures to change the racist culture by signing two Muslim players—a big step in the right direction. But it seems this has only strengthened the resolve of the racists, because on Sunday, when one of those players—a striker from Russia named Zaur Sadayev—scored a goal for Beitar, about 300 of the club’s fans left the stadium.

However, it is very important to point out that most Beitar fans are not total scumbags. The vast majority of the crowd celebrated the goal, jeered the racists as they marched out of the stadium, then gave Sadayev a standing ovation later in the game when he was subbed out. This was commendable and truly great to see.

Still, as is often the case, one bad apple spoils the bunch. Beitar Jerusalem F.C. still has a lot of work to do to reform their fans.

Take a look at the video: