The Cheerleader Sweet 16 of the 2013 NCAA Tournament 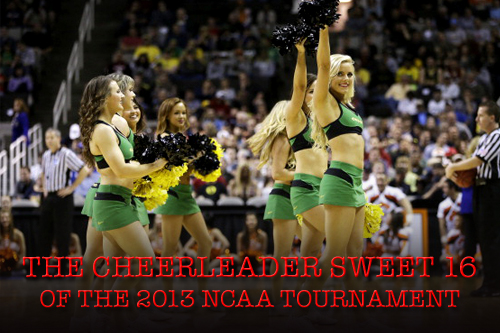 The Sweet 16 of the 2013 NCAA Tournament has been selected, and the college basketball action resumes on Thursday at 7:15 P.M. eastern. However, if your team is out, your bracket has gone to hell, and all you’re really looking forward to is the college basketball cheerleaders, there is good news: you don’t have to wait a minute longer. Today we present to you “The Cheerleader Sweet 16,” a look at what the Sweet 16 would look like if it were decided by the excellence of cheerleading squads rather than the outcomes of the games. Your team may be out of the official tournament, but did the cheerleaders make this list? Have a look and find out. 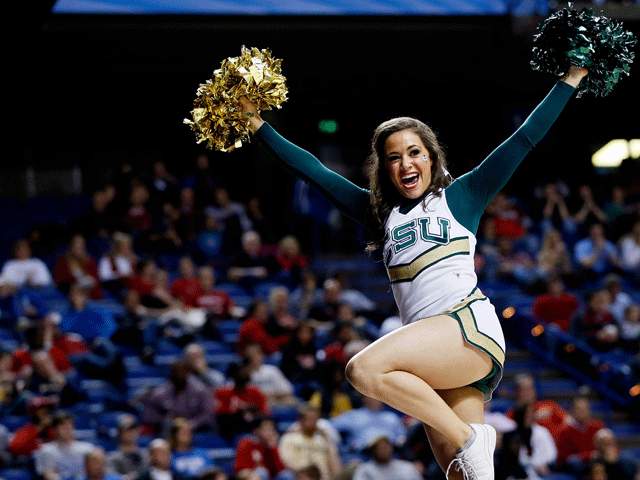 The Colorado State Rams basketball team didn't make it past the second round after beating Missouri in Round 1. In fact, they got absolutely obliterated by Louisville. However, their cheerleaders are still alive. Sure, they're seeded 16th in our Cheerleader Sweet 16 bracket, but that's better than nothing. And who knows—maybe they'll pull off an upset? 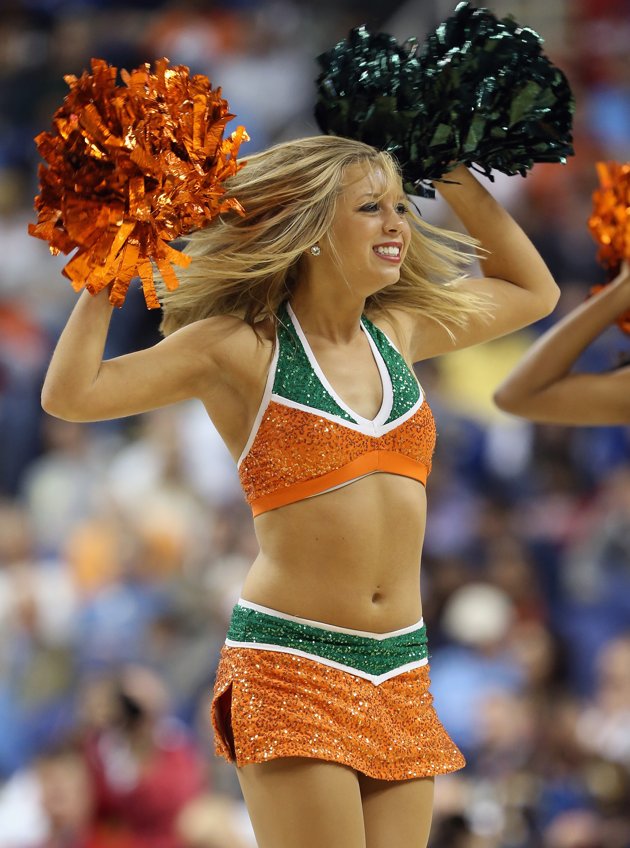 The Miami Hurricanes have looked amazing so far this March. They won their opening game by 29 points, then handled the Big Ten's Illinois Fighting Illini without too much trouble to reach the Sweet 16, where they'll face Marquette. The Hurricanes cheerleaders? Well, they haven't exactly dominated the field thus far, but they made the Sweet 16, so they're still alive. 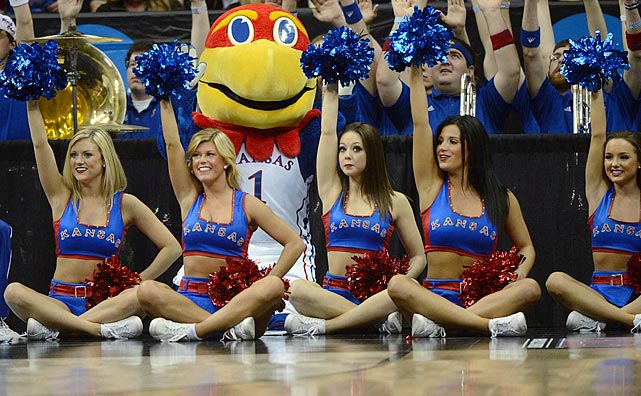 The Jayhawks cheerleaders aren't nearly as formidable as the no. 1 seeded basketball team, who stomped right over North Carolina to reach the Sweet 16. However, the cheerleaders can definitely hold their own. You don't want to underestimate them. 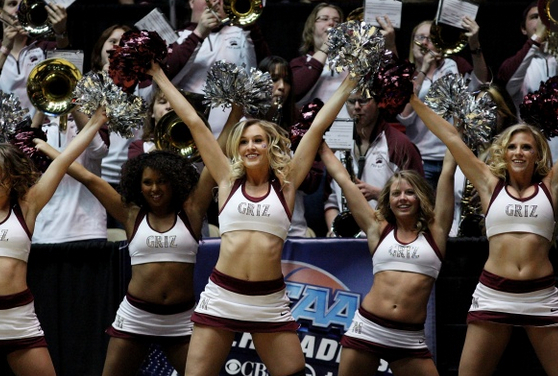 Without a doubt, the Montana Grizzlies cheerleaders are the Cinderella squad of the 2013 NCAA Tournament of Cheerleaders. While the no. 13 seed basketball team suffered the biggest blowout of the basketball tournament so far, losing 84-31 to Syracuse, the cheerleaders have surprised us all. I mean, Montana girls? Who knew? 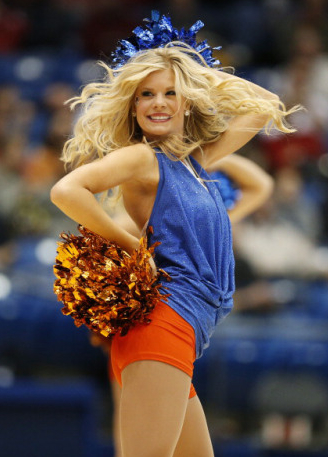 If the Broncos had won their play-in game, they would have earned a 13 seed and the right to face no. 4 Kansas State in the Round of 64. However, Boise State got matched up against a team of destiny in the play-in game—actual Sweet 16 team La Salle—so the basketball team had to head back to Idaho earlier than they would have liked. The Boise State cheerleaders are a different story. They're still alive, representing their potato-producing state with pride. 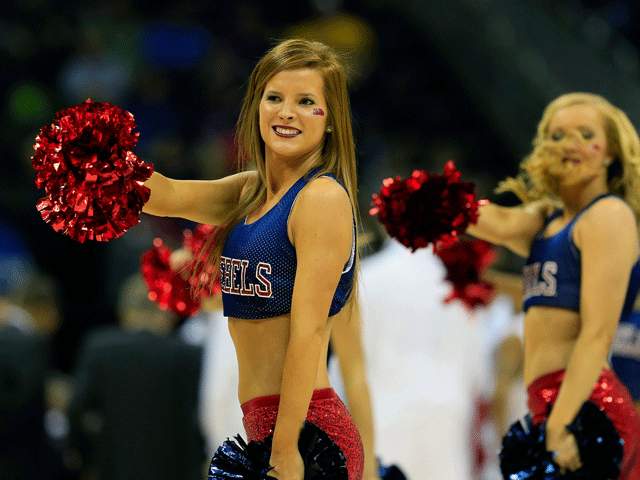 College basketball bad boy Marshall Henderson and the Ole Miss Rebels saw their Cinderella story come to an end a little earlier than they would have liked. The Rebs won the SEC tournament to secure a spot in the Big Dance, then they beat the Wisconsin Badgers of the mighty Big Ten in the opening round. However, in Round 2 the basketball team ran into another Cinderella in La Salle, and that was the end of the road. The cheerleading squad, on the other hand, has moved on. La Salle's squad was no match for these ladies. 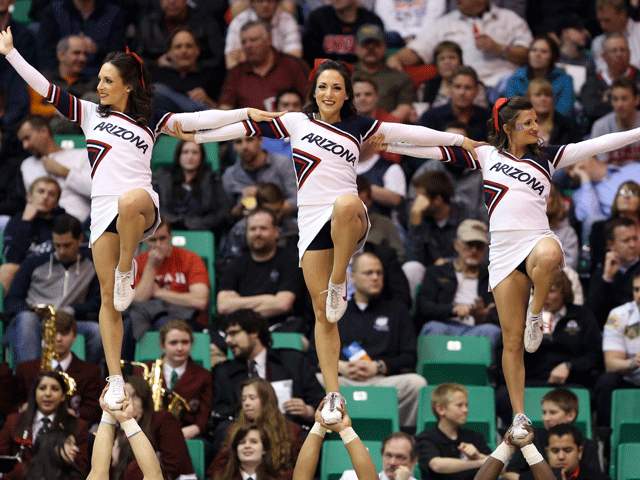 The Arizona Wildcats defeated Belmont in the Round of 64, then took advantage of Harvard's big upset over New Mexico to slip into the Sweet 16, where they'll face Ohio State. The cheerleaders? They've also made it to the Sweet 16. However, they didn't need any luck to make it there. They got there all on their own merit. 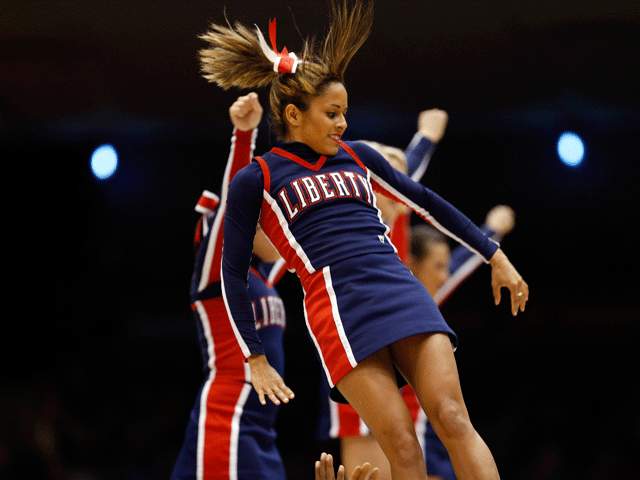 The Liberty Flames basketball team made headlines for all the wrong reasons this year. They became one of the worst teams ever to qualify for the NCAA Tournament when they won the Big South Conference tournament. Then they lost a heartbreaker to North Carolina A&T in the play-in by one point. However, the Liberty Flames cheerleaders really turned some heads with their surprising run to the Cheerleader Sweet 16. What a great underdog story! 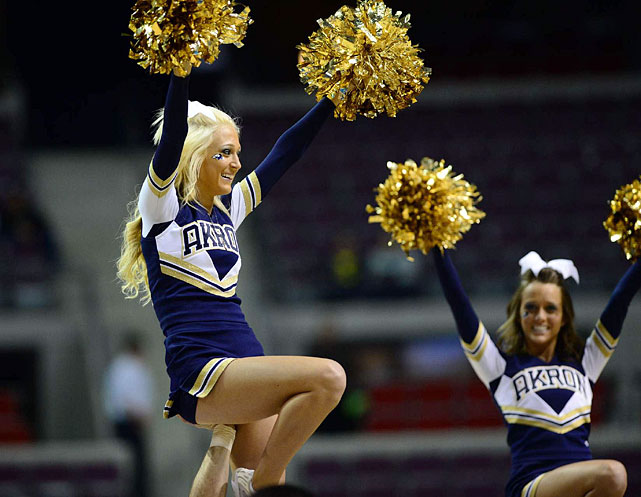 The no. 12 seed Akron Zips got destroyed by VCU in the opening round, 88-42, thanks to the fact that they were missing two starters and two bench players as a result of suspensions, injuries, and illness. Luckily the Zips cheerleaders were in top form and ready to compete. Now they're in the Sweet 16 and seeded all the way up at No. 8. 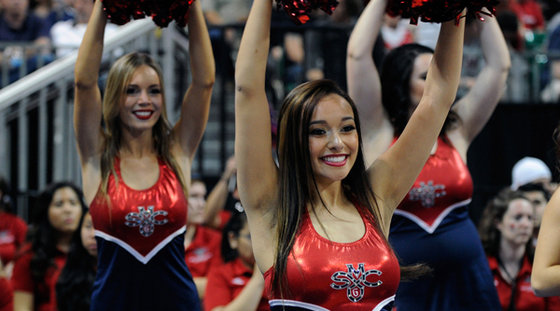 The Saint Mary's Gaels had to win a play-in game against Mid Tennessee to secure their #11 seed in the Big Dance. Then they very nearly beat the #6 Memphis Tigers in the opening round with a last second three-point attempt. The Gaels cheerleaders have had better luck. They find themselves ranked 7th among the top 16 squads remaining, and they've got a good chance of going all the way. 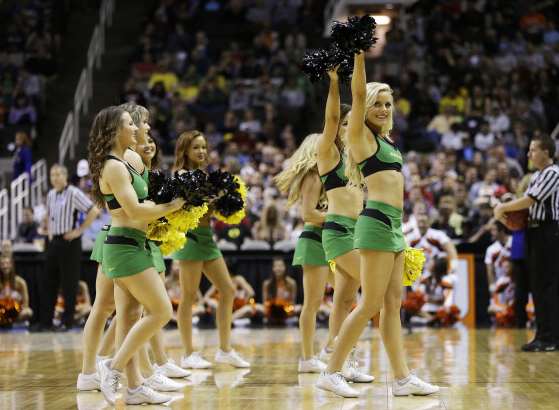 We already knew the Oregon Ducks football cheerleaders were first rate, so we should have expected to see the Ducks basketball cheerleaders performing well, too. Far more surprising is the play of the basketball team. Sure, they were seeded too low to begin with, and there were some people who said so right from the beginning. But still, who knew they'd be facing Louisville in the Sweet 16? 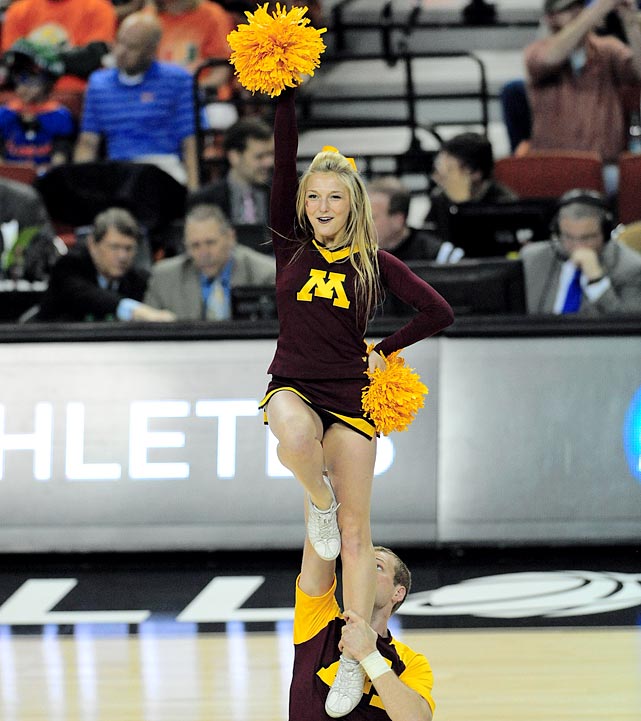 The Golden Gophers upset UCLA in the first round, but their failure to make the Sweet 16 cost coach Tubby Smith his job. The cheerleading coach? Her job is totally secure. The Gophers cheerleaders are easily among the top five squads this March. 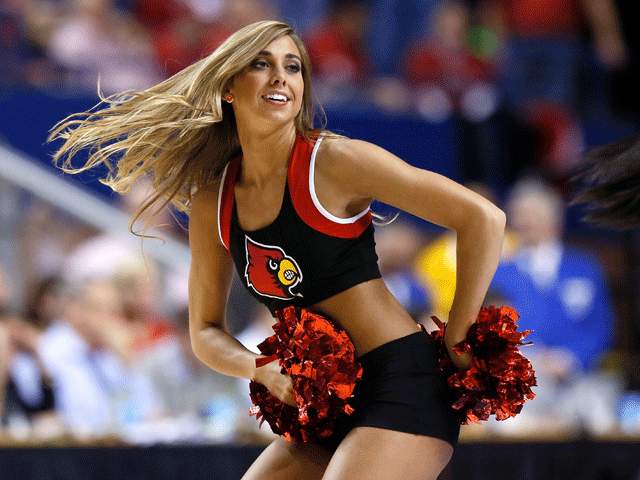 The Louisville Cardinals basketball team is the #1 overall seed and still alive, and the cheerleaders are definitely holding their own, too. Obviously, it's a great time to be a Louisville fan. 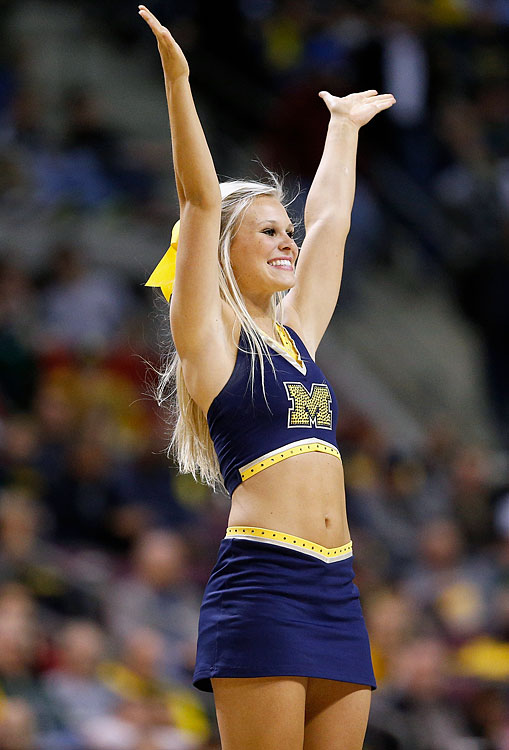 If not for having been beaten up in the brutal Big Ten this year, the Wolverines would probably have earned themselves a #2 or maybe even a #1 seed in this year's draw. As it is, they're still alive and will face Kansas in the Sweet 16. As for the cheerleaders, they've put up a solid performance and come in at #3. That's not bad at all. 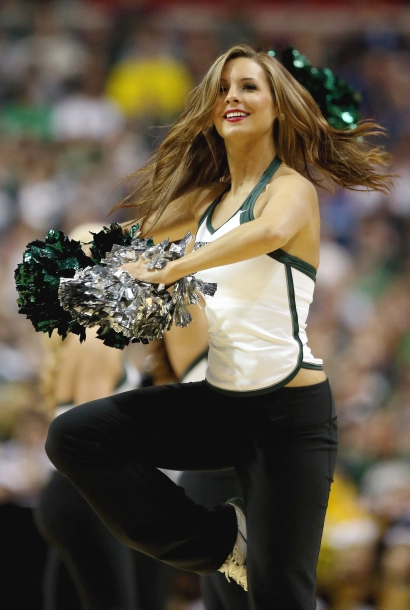 It seems like Tom Izzo's basketball teams make the Sweet 16 every year. Thus, nobody is really surprised to see them penciled in on the bracket, ready to face #2 Duke. However, I for one was a little surprised by the Spartan cheerleaders. I had no idea they were as capable as the basketball team. 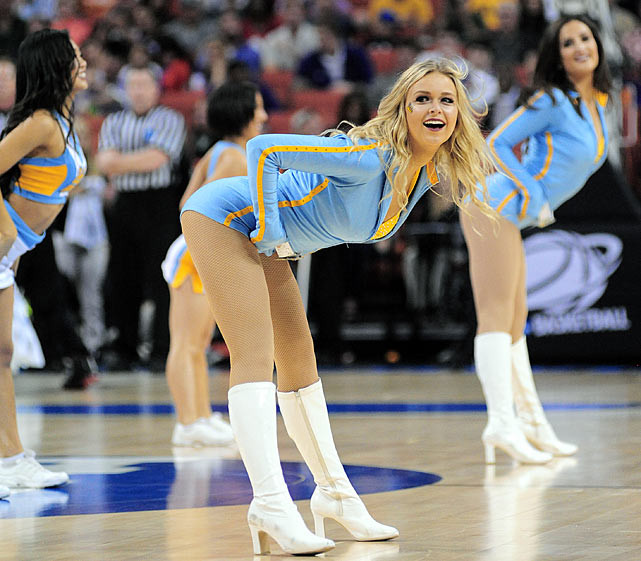 Come on, was there ever any doubt as to which squad would take the top spot? Every year, the title of "Hottest Cheerleaders in College Basketball" is UCLA's to lose. And this year, while the basketball team got knocked out early by Minnesota, the Bruins cheerleading squad looks ready to hoist another banner. (Figuratively, of course. I don't think they give banners for "Hottest Cheerleading Squad.")