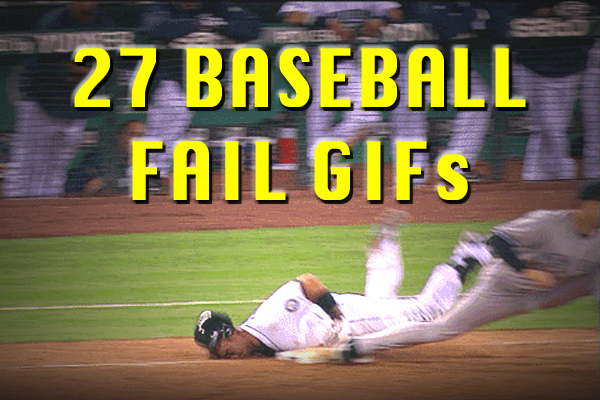 The 2013 Major League Baseball season is upon us, which means you can once against savor the smell of hot dogs and the crack of the bat. It also means we can once again feast our eyes on towering home runs, diving catches, and crisp double plays. However, you’ll be seeing none of that here. I’ve decided to celebrate the start of another baseball season by compiling a list of baseball’s absurd moments. Why? Because if you take baseball too seriously it just gets boring. So if you’re looking for a way to counteract all the hyper-sentimentality that comes with the start of the MLB season, start right here with this list of 27 baseball fail GIFs.

Come on, Clay, you've got to get a better grip on the ball. Pick up the rosin bag.

Here is the entire 2012 Houston Astros season, summarized succinctly in one single GIF.

I guess I can't say this play sums up the Orioles' 2012 season since they actually made the playoffs. However, they really were kind of lucky...unlike Adam Jones on this play.

Sometimes they just get away from you, I guess.

You think you're getting a really cool shot of a home run trot. Then you strip on your own feet, fall, and smash your camera to bits. It happens.

Okay, actually, this one kind of sums up the 2012 Houston Astros, too.

And this one sums up the 2012 Minnesota Twins.

I guess the pitcher hurt himself on the pitch, but it certainly looks like he's just mocking the guy he just hit.

You think the guy getting hit in the chest is going to be the best part, but then you see the other guy throw the ball straight into the dirt. Smooth.

Wow, how can we top this awful ceremonial first pitch?

Oh, that's how: Mariah Carey in heels. At least it was almost over the plate.

At least this guy was nice enough to hand the foul ball he just caught to his daughter—you can't say that for all Phillies fans. They can be pretty harsh.

Once this guy got his momentum headed over that railing, there was no stopping him.

I think this kid was just looking for an excuse to whack his brother with a wiffle ball bat. P.S., who's the parent of the year filming this scene? You'd think they might have been like, "uh, Billy, take a couple steps back okay?"

14. What Little Brothers Are For

Not everyone is as focused as #12 here, and that really pisses him off.

How hard it is to field ground balls when you have arthritis in your hips? Very hard.

Buck Showalter gets left hangin' by Mark Reynolds, so he just finishes the fist bump all by himself. How sad.

All pitchers need to spend time doing PFP (pitchers fielding practice), but some of them need to start with such basic skills as running.

I guess he thought he had it. That, or maybe he was trying to fool the runner or something. Either way, it looks ridiculous.

This is funny to watch, but I think this guy actually broke is clavicle or something. Don't you feel like a jerk for laughing now?

There are a lot of reasons you should not dive or slide into first base. This would be one of them.

I wonder how much getting run over by that tarp roller would have hurt? I'm thinking quite a bit.

I bet that felt good. I wonder if Carlos Ruiz returned the favor in the top half of the inning.

They don't have rosin bags for the guys in the outfield. Maybe they should.

Then again, as A.J. Burnett proves, sometimes rosin bags can be tricky.