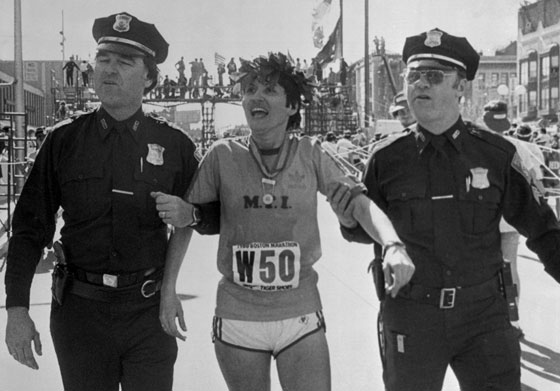 It was on this day in 1982 that Boston Marathon cheater Rosie Ruiz was arrested in New York and charged with forgery and grand larceny.  This was just one of many arrests for Ruiz, whose life seemed to go downhill after she was caught cheating at the 84th annual Boston Marathon.

Rosie Ruiz crossed the finish line with a time of 2:31:56, which would have been a women’s record, however, race officials became suspicious when they noticed that Ruiz was not at all out of breath, or sweating.  It was later determined that she entered the race in the last mile to be the first woman to cross the finish line and it was also discovered that she cheated in the New York City Marathon to qualify for the Boston event.

Jacqueline Gareau of Montreal was eventually given the title, as she was the first woman to complete the entire race.

Here is an interview with Ruiz after the race.  “What are intervals???”