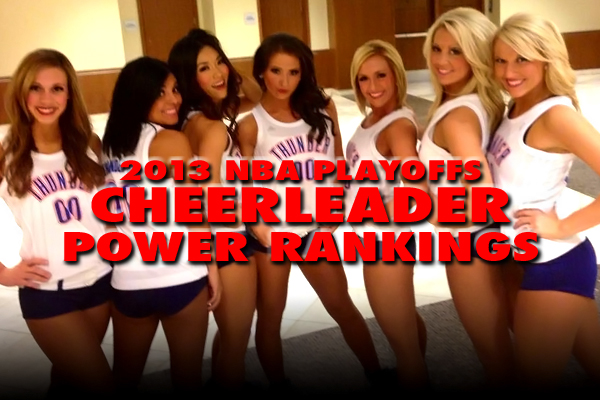 We’ve tried to get you interested in the 2013 NBA Playoffs by telling you about the big storylines, and by giving you a little lesson in the history of NBA playoff upsets. Ultimately, however, if you don’t really have a team to root for, whether it’s because the team in your area sucks (sorry, Charlotte) or because there is no team in your area (sorry, St. Louis), it’s hard to get into it. Today, however, we’re going to help you find a team to root for by ranking the cheerleading squads of all 16 teams in the playoffs. If the sharp shooting of Stephen Curry or the monster dunks of Blake Griffin don’t spark any allegiance in you, maybe some gorgeous women in flattering uniforms will. So take a look, and tell us which team you’re rooting for. 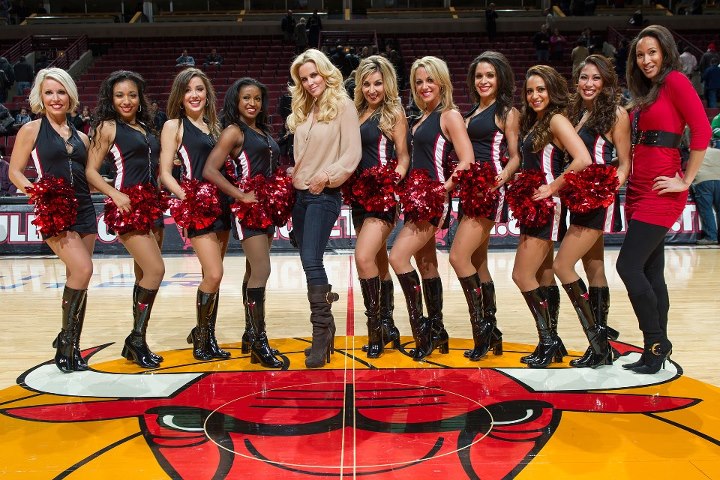 Hey, somebody has to be last, and this year it's the Chicago Bulls' own Luvabulls Dance Team. But it's not that these women aren't hot. It's just that they are the least hot. I can think of a lot of worse things in life than being one of the least hot (but still hot) cheerleading squads in the NBA playoffs. 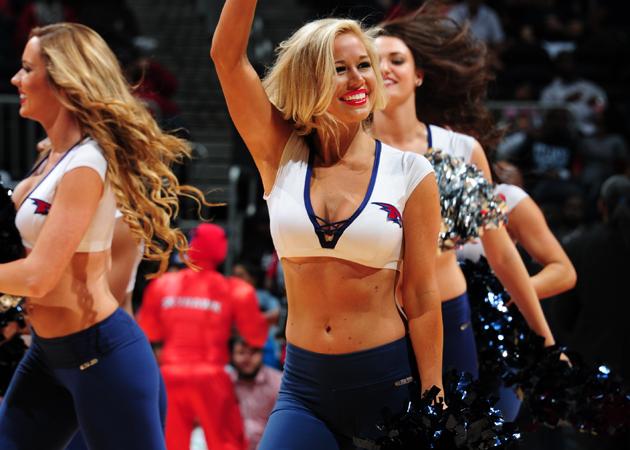 The Atlanta Hawks Dance Team ranked second in the Eastern Conference last year. Unfortunately, this year they took quite a tumble. Of course, that doesn't mean they aren't still really attractive. These rankings are purely relative. 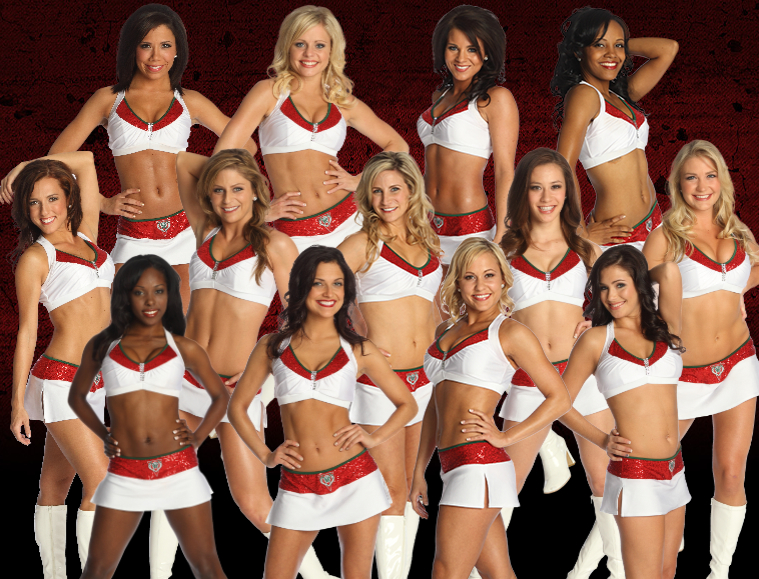 The Milwaukee Bucks are without a doubt the worst team in the 2013 NBA Playoffs. The Miami Heat have already started ripping them apart. But at least their dance team isn't last in the cheerleader rankings. So cheer up, Bucks fans. 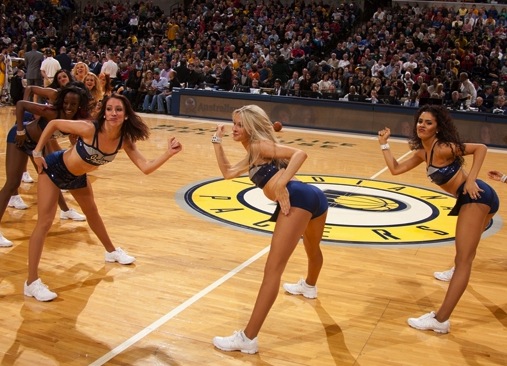 Is this squad's name, "The Pacemates," an intentional portmanteau combining "pacemaker" and "playmates"—both of which get your heart pumping? I have no idea. But those two words popped into my head when I saw "Pacemates," and from a marketing point of view I'd say that's probably a good thing. (Also probably a good thing from a marketing point of view: those shorts.) 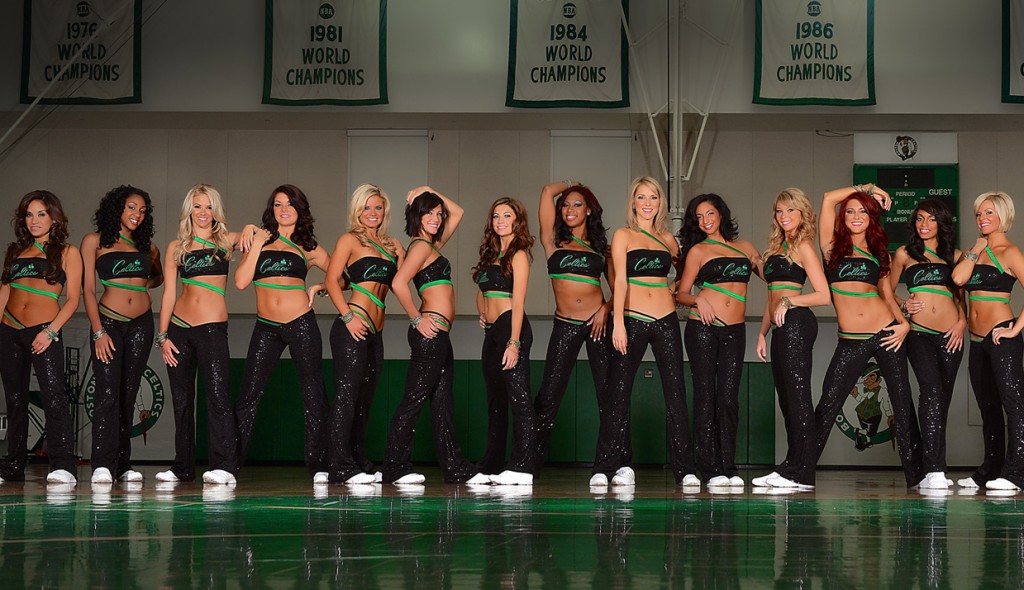 What this squad lacks in a creative name it makes up for with racy wardrobe choices. I mean, is it just me, or does it seem like these pants are designed to make it look like the girls' thong underwear is showing? If so, it's not really a family-friendly wardrobe choice, but it'll probably put a few extra butts in the seats at the TD Center. 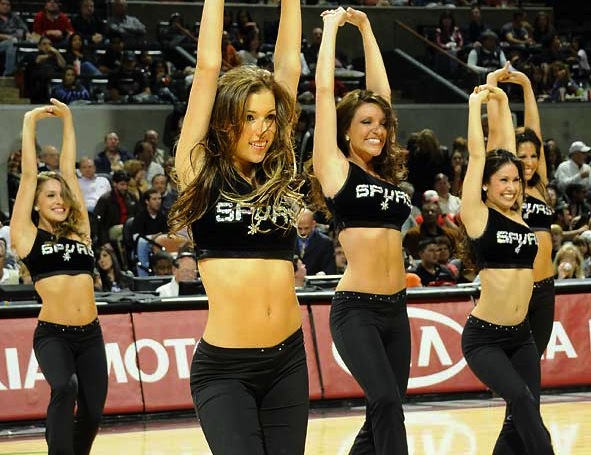 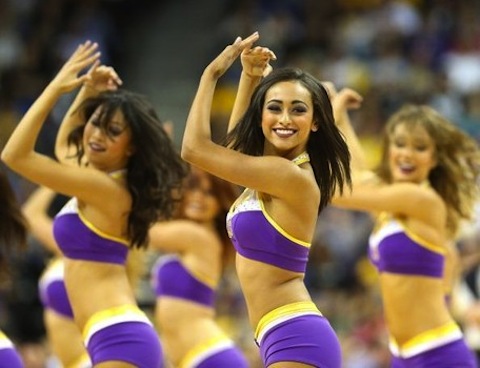 Just like the actual basketball team, the Laker Girls have fallen on hard times this season. Normally they rank at the top of any list of hottest NBA cheerleaders, but this year they barely cracked the top 10. Am I just being biased, too easily influenced by the disappointing Lakers season? No, I don't think so. And as evidence, just take a look at the rest of the top 10. 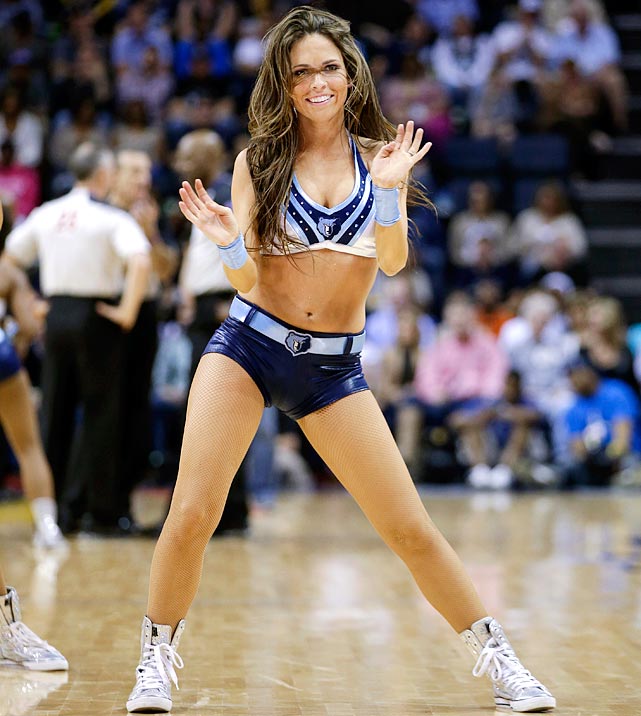 This lovely woman is pretty much all you need to know about the Memphis Grizz Girls. 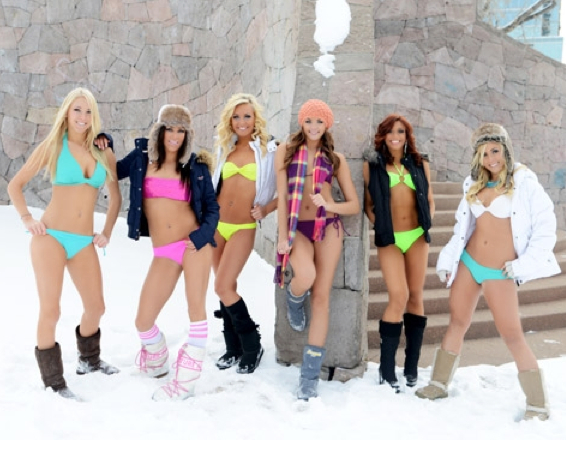 The last time I checked, Denver wasn't located near any beaches, so... Oh wait, I get it! That's what makes this bikini photo shoot amusing! They're up in the rockies, with all the snow, in bikinis. It's like the snowy mountains are Denver's beaches. Anyway, gimmicks aside, the Denver Nuggets Cheer Team is solid gold. 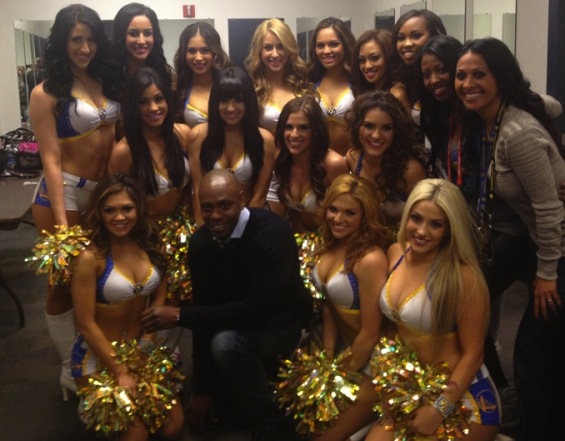 Yeah, Dave Chappelle knows what's up. The Warrior Girls are absolutely amazing. They don't get to cheer in the playoffs all that much—this is just their second appearance since the middle of Bill Clinton's first term as president—so let's hope they make the best of a rare opportunity this year and blow us all away with their peppy dance numbers. 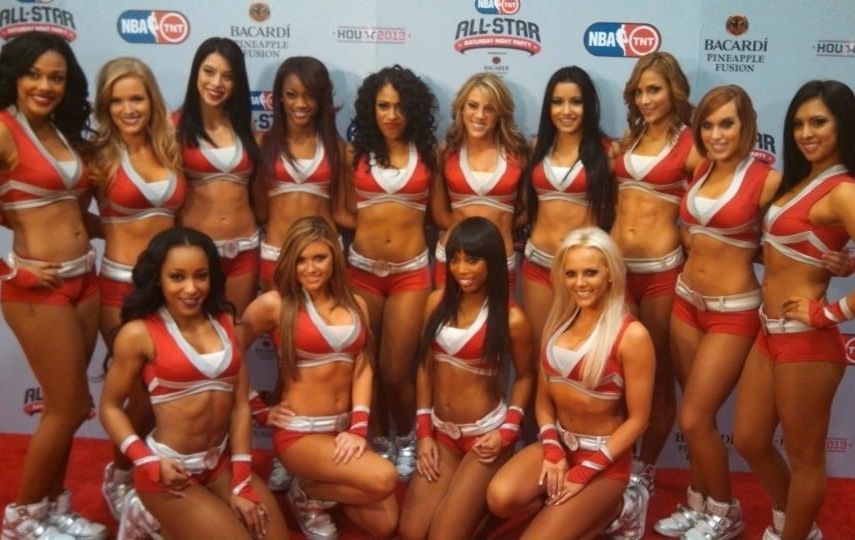 Meet the Houston Rockets Power Dancers, your NBA All-Abs Cheerleading Squad. Seriously, all but one or two of these women have chiseled abs. I bet they don't even practice dancing. They just sit around a gym doing crunches all day. 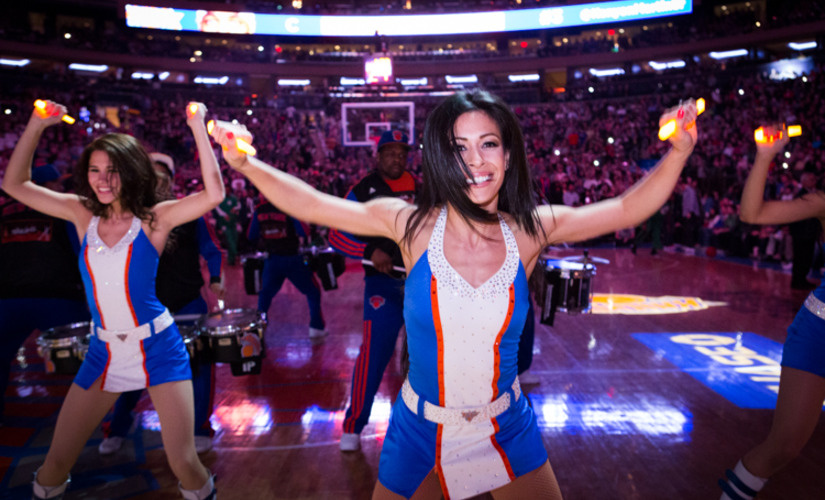 The Knicks are back in the playoffs this year, which is great news for the many fans of the Knicks City Dancers. They have always been one of the NBA's most iconic cheerleading squads/dance teams, and this year they have a particularly attractive group of dancers as well. The two women in this photo alone are enough to get them in the top five. 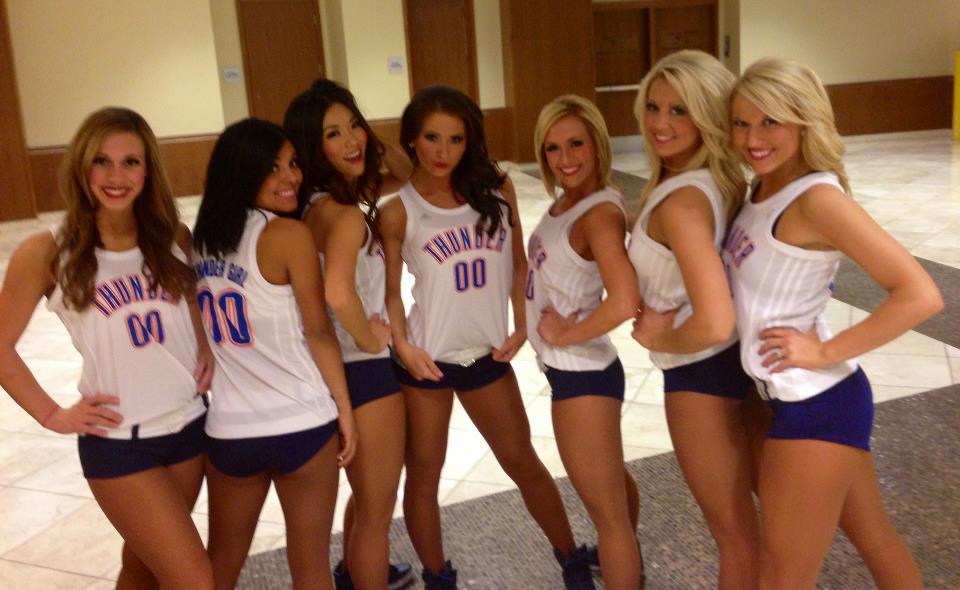 Last year in our rankings of every NBA cheerleading squad, the Oklahoma City Thunder Girls took fourth place in the Western Conference. Interestingly, when you eliminate half of the squads in the league and look at just the playoff teams, the Oklahoma City Thunder Girls take 4th place again. I didn't set out to make this happen. I guess there is some consistency from year to year. So good job, Oklahoma City. I don't know what you folks are doing to produce such amazing-looking women, but keep it up. 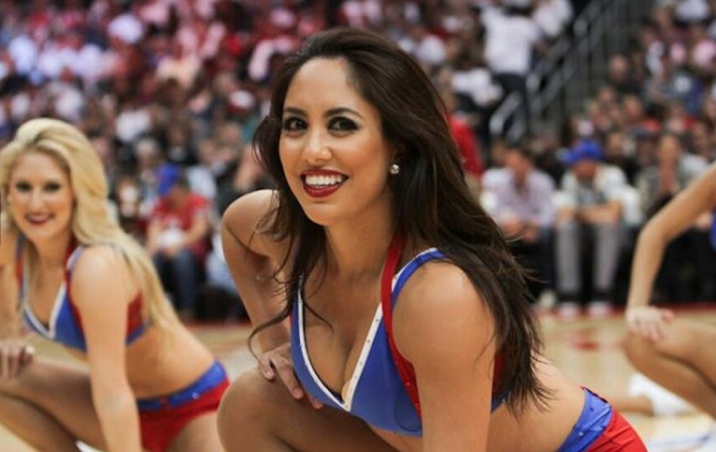 The Clippers have spirit, yes they do. And by "spirit" I mean a lot of really attractive women on their dance team. They must keep these women well out of sight while the guys are playing ball, otherwise they'd never be able to pull off all those showtime dunks night after night. They'd be too distracted. 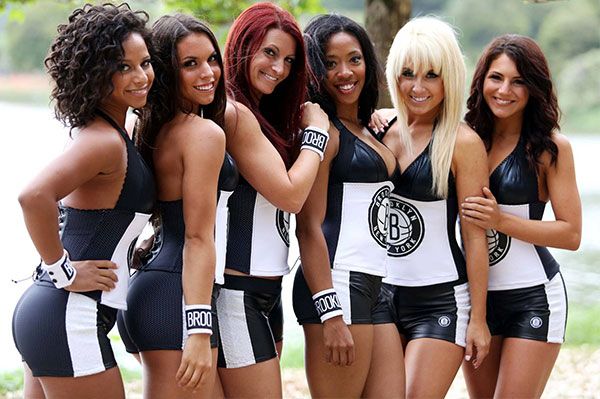 Their new uniforms were much-maligned when they were unveiled last summer, but the Brooklynettes are still one of the hottest dance teams in the NBA. If you just pretend like the woman in the middle with the red hair isn't flexing her giant manly guns, this is actually one amazingly attractive bunch of dancers. 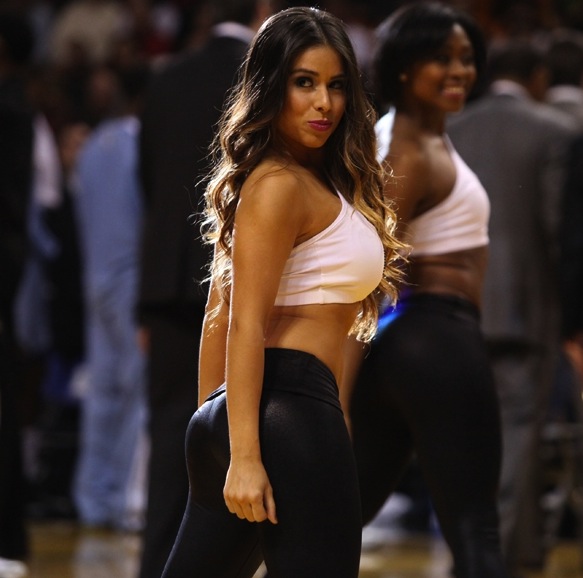 The Heat didn't just put a dream team on the court. They took full advantage of the abundance of gorgeous women in South Florida to put a dream team of cheerleaders on the sidelines as well.  Even if you can't stand the thought of LeBron and company winning back-to-back championships, you have to admit that you wouldn't mind watching the Miami cheerleaders do their thing.