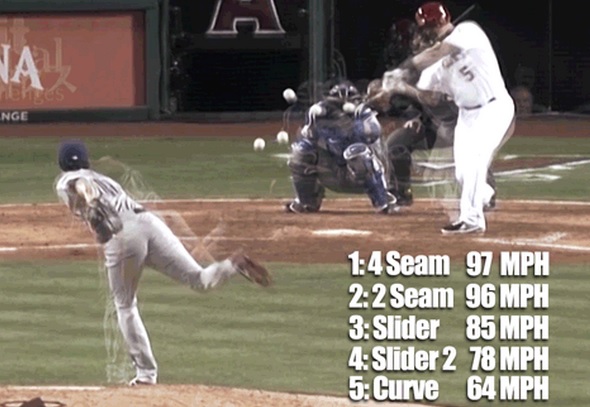 Yu Darvish is off to a scorching start in just his second season in the Majors, as he has allowed just six earned runs against over the course of his first five starts, compiling a 4-1 record, 1.65 ERA (3rd in AL), 0.80 WHIP (2nd in AL) and 49 strikeouts (1st in AL).  His solid play thus far has allowed the Texas Rangers to bolster the best record (14-7) and ERA (2.85) in the American League, and his name has also been floating around as an early candidate for AL Cy Young honors.

Sure, we may only be 21 games into a 162-game season, but Darvish’s success early on shouldn’t be regarded as some sort of fluke.  This guy is something special.  And if his 16-9 record and 3.90 ERA during his rookie season in 2012 isn’t enough to convince you of just that, perhaps the following gif will.

It provides a great look at Darvish’s five (yes, five!) pitches from his impressive arsenal, which was on display during last night’s victory over the Angels.  You’ll notice that there is a four-seam fastball, a two-seam fastball, two types of sliders and a curveball, and they range from 97 mph to 64 mph.

Incredible, isn’t it?  And the scary part is that Darvish actually has more than just these five pitches.  He can also throw a cutter, change-up or splitter.

Adding those pitches to this gif, on top of the five already included, would have only made things that much more confusing, which is exactly how I assume every player feels whenever they step into the batter’s box against Darvish.