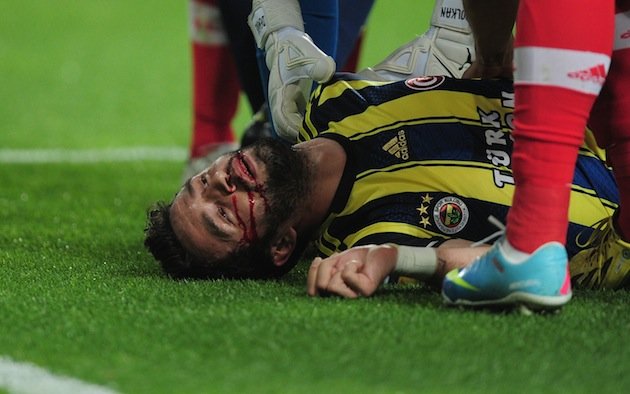 In soccer, there are reckless challenges, and then there are insanely vicious challenges. The challenge that Manchester United’s Nani put up against Real Madrid’s Alvaro Arbeloa in the UEFA Champions League Round of 16—the one that got Nani sent off, enabling Real to score two more goals and knock Man U out of the tournament? That was reckless.

The one that you’re about to see here? Insanely vicious.

During the Europa League semifinal yesterday between Portugal’s Benfica FC and Turkey’s Fenerbahce SK, Benfica’s Nicolas Gaitan tried to volley a high cross from one of his teammates into the opposing net. Unfortunately, in between Gaitan’s foot and the ball was Fenerbahce defender Gökhan Gönül, and his face absorbed the full force of Gaitan’s kick.

Here’s video of the play:

And here’s the animated GIF of Nani’s dangerous play, just to provide a frame of reference:

Obviously, this one is a lot worse than the play that got Nani sent off against Real Madrid. Poor Gönül got knocked unconscious, apparently broke or lost seven teeth, and sustained a facial fracture. However, this play didn’t even get a whistle, let alone a red card.

If I were the conspiracy theory type (and I’m not), I might wonder if this is payback for what happened to Nani. You see, Nani is Portuguese and was sent off by a Turkish ref. Now we have a Turking player getting brutalized by a Portuguese team and…nothing. Interesting.