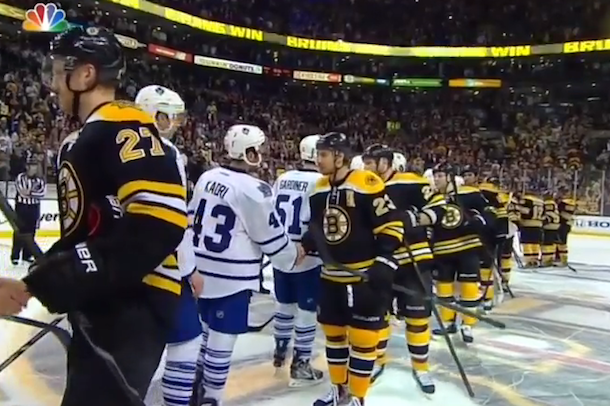 Down by three goals halfway through the third period of Game 7 against the Maple Leafs, the Bruins scored at the 10:30 mark to close the deficit to two. Then they scored two more goals in the final minute and a half to tie the game and send it to overtime, before ending the game, and the series, with another goal about seven minutes into the extra frame.

It was, quite simply, a heroic comeback for the ages that every Bruins fan will talk about for the rest of their days. And yet, it was also an epic choke job that was almost unimaginable—even for long-suffering Toronto hockey fans. But it happened.

In case you didn’t see the game—maybe you flipped over to the NBA playoffs when Toronto went up by three—here’s a recap of the stunning comeback/collapse:

So how did Leafs fans take it? Well, there was no rioting. They were way too numb and dumbfounded for that.

Here are a couple of videos showing the reactions of Leafs fans gathered in the square outside the Air Canada Centre in Toronto. The first shows the crowd’s dejected reaction to the game-tying goal:

The second shows two particularly angry fans telling the sad-sack Leafs exactly what they think of their effort:

Nice job, Leafs. No wonder your fans feel the need to smoke weed while watching your games.