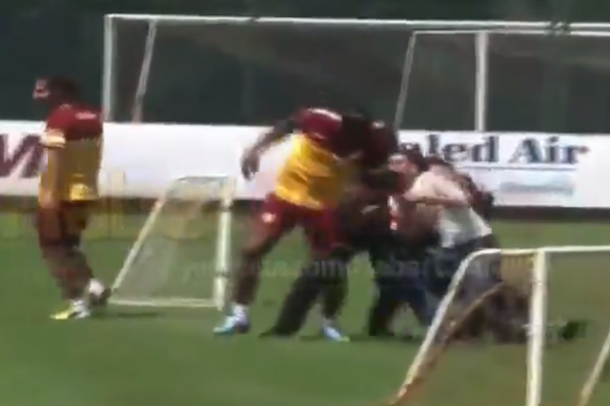 Last spring, after the conclusion of the 2011-12 English Premier League season, superstar forward Didier Drogba announced his departure from Chelsea. He said it was just time for something new, but everyone knew it was really because he was 34 years old and Chelsea didn’t want to invest any more money in their fourth-leading scorer of all-time.

Of course, the way things are in the world of soccer today, aging superstars don’t have to retire or face diminished roles with their clubs when they reach a certain age. They can sign huge contracts with one of the world’s lesser leagues and get even richer while helping sell extra tickets. That’s what David Beckham did. And that’s what Drogba did, too. He signed up with a club in China last summer. Then, in January, he signed on with Galatasaray SK of the Turkish Süper Lig.

Now, whenever a major star signs on with a lesser league, the fans always go nuts. That’s the whole point. However, recently one Galatasaray fan went a little too nuts and ran out onto the field and tackled the legendary Ivorian striker, nearly breaking the guy’s leg.

Luckily, Drogba was able to walk away from the incident unscathed. Galatasaray would have been in a pretty nasty bind had their $5 million star striker been taken out by some lunatic fan.