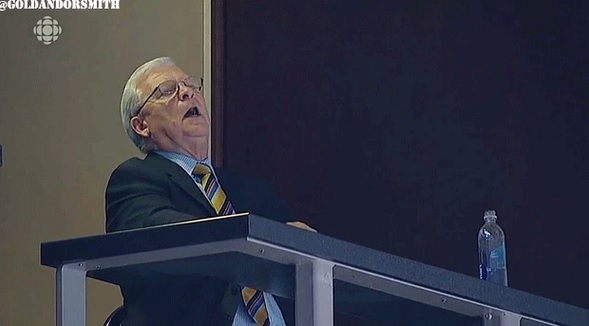 The Ottawa Senators were able to score a shorthanded goal with just 29 seconds remaining in regulation to tie Game Three of their Eastern Conference semi-final series with the Pittsburgh Penguins at 1-1.  And they would go on to win the game in double-overtime and earn their first victory of the series in the process.  That result surely made the Senators’ General Manager, Bryan Murray, a very happy man, but sitting through that 88 minute nail-biter wasn’t easy for the 70-year-old from Shawville, Quebec.

In addition to watching his Sens fail to score for 59 minutes, he also witnessed them struggle to enter the Pens zone’ during the dying minutes of regulation, as it seemed like a 3-0 series deficit was inevitable.  And the result was some rather humorous facial expressions and reactions from Murray.

Sure, Murray may have had a tough time maintaining his composure, but luckily for him, the Sens’ players weren’t having that same issue Sunday evening, and now they’ll have an opportunity to tie their best-of-seven series on home ice when the two teams square off again on Wednesday at Scotiabank Place.