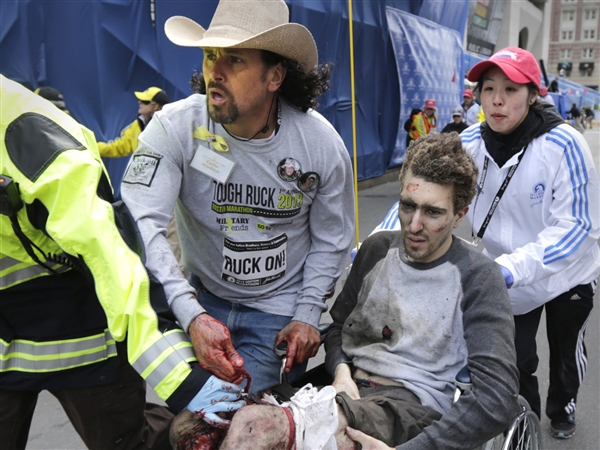 Thousands of horrifying images came out of Boston on April 15, 2013, but only one managed to capture both hope and despair: the photo of Jeff Bauman, leg blown off below the knee, being wheeled to safety by Good Samaritan Carlos Arredondo.

On the one hand, that image—which has been cropped here—was so graphic and revolting that you couldn’t help but feel anger and disgust toward the perpetrators of the Boston Marathon bombing. And yet, on the other hand, seeing one human being selflessly come to the aid of another, you couldn’t help but take heart and feel that, ultimately, the goodness in humanity outweighs the wickedness.

I bring all this up, of course, because about 45,000 people at Fenway Park yesterday got to pay tribute to the two men in that iconic photograph. The Boston Red Sox brought Bauman and Arredondo to their historic park to throw out dual ceremonial first pitches and pay tribute to their courage.

Gives you goosebumps, doesn’t it?