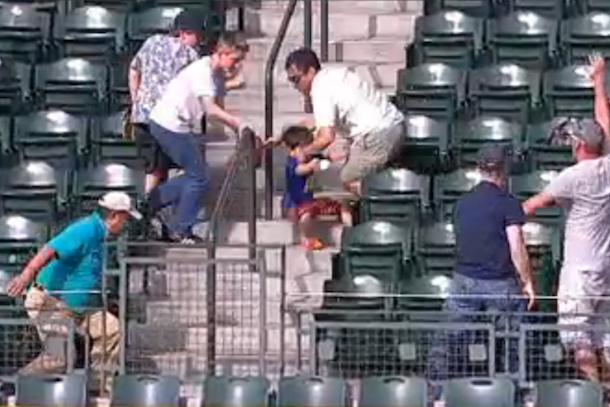 Do you know how many times in the history of Major League Baseball an extra innings game has been tied up in the bottom of an inning by a grand slam?

Try zero. The league has been around for over a century, and not once in that time has anyone tied a game in an extra frame with a grand slam…until yesterday in Seattle.

The Mariners and White Sox didn’t score a single run through 13 innings, but finally, in the top of the 14th, Chicago busted the flood gates open and put five runs across the plate. It looked like the game was over. Fans who had stayed for the free baseball started to file out of Safeco Field. However, in the bottom of the 14th, the Mariners scored a run. Then they loaded the bases and third baseman Kyle Seager came to the plate and hit a grand effing slam.

I mean, do you know how hard it is to do something in baseball that has never been done before? It’s almost impossible. So that home run ball? Yeah, that would be quite the souvenir. It would probably even be worth running over a small child to get

Want the GIF, too? Sure, here you go:

As you probably noticed in the video, in flattening his child, Dad actually seemed to run past the ball. So who do you suppose actually ended up with it?