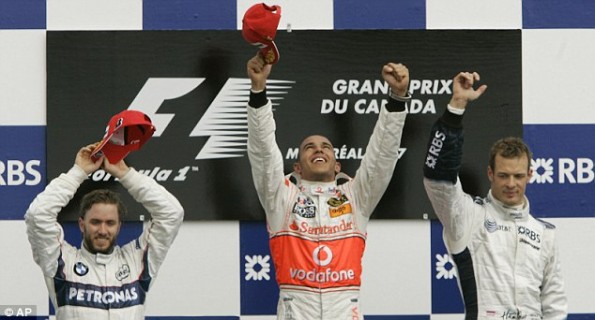 Lewis Hamilton earned his first career pole position for this race, as he and McLaren-Mercedes teammate Fernando Alonso would start the race in the first two positions.  Hamilton led for most of the race, even though the safety car was deployed on four occasions, which increased his chances of being overtaken.  Nick Heidfeld, driving for BMW Sauber, finished second and Alexander Wurz, representing Williams-Toyota, placed third.

Hamilton continues to be among the elite drivers in Formula One today, however, no one has been able to touch Red Bull’s Sebastian Vettel this season, as he looks for his fourth consecutive F1 Drivers Championship.

Here’s a look at Hamilton on the podium at the 2007 Canadian Grand Prix.