>Total Pro Sports
NBA
Does This LeBron vs. Jordan Meme Make Any Sense To You?

Does This LeBron vs. Jordan Meme Make Any Sense To You? 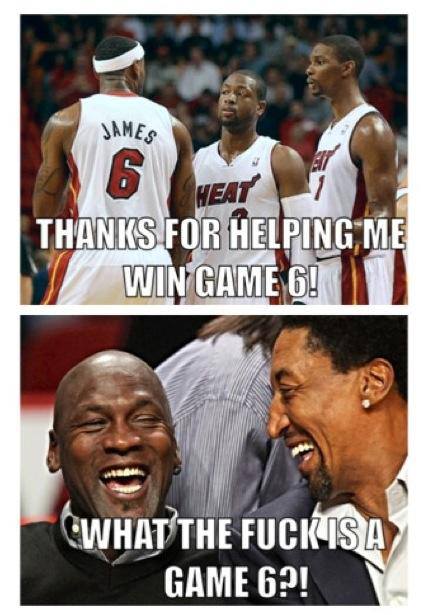 So the above meme was created following the Miami Heat’s heroic Game 6 performance that saw them battle back from a five-point deficit with just 28 seconds remaining to force a decisive Game 7.  And it has gone viral ever since (it has 38,948 likes, 11,578 shares and 1,459 comments on NBA LOLz Facebook Page as of 6:15 pm today).

It portrays LeBron James thanking his teammates for their contributions down the stretch that helped keep their championship hopes alive, while Michael Jordan and Scottie Pippen laugh and ask, “What the f*ck is a Game 6?!”

Is this supposed to imply that Jordan and Pippen never had to play in a Game 6 while winning their six NBA Titles back in the 90s?  Because I’m quite certain that they know all about Game 6s, seeing as how their last five championships were each won during the sixth game of the NBA Finals.

If you ask me, this meme should have started with LeBron saying, “Thanks for helping me get to Game 7,” and ended with Jordan saying, “What the f*ck is a Game 7?!”

I guess the creator of this meme will get another crack at it should the Miami Heat win tonight’s highly anticipated Game 7 against the Spurs.