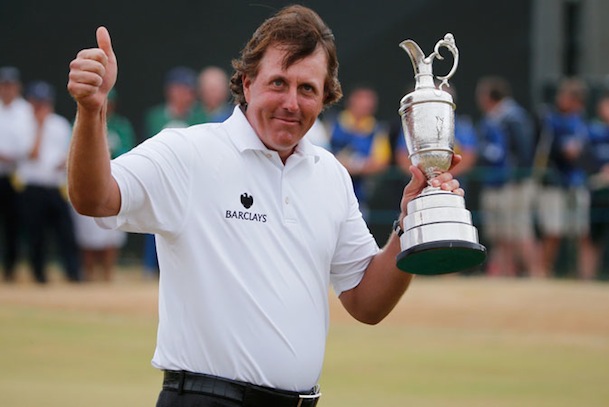 Phil Mickelson didn’t really have much to prove coming into the 2013 British Open. The 43-year-old already had 51 professional wins (9th all-time), including three Masters victories and one PGA Championship victory. He long ago shed the label of “best golfer never to win a major,” and has since established himself as one of the greatest of all-time. Thus, some people might have expected that, trailing the leader by five strokes heading into the final round at Muirfield on Sunday, Lefty might have just taken it easy and started thinking about the PGA Championship in August.

But of course, that’s not what great competitors do. They never rest of their laurels, and they never give up. So I guess it really shouldn’t be all that surprising that, instead of phoning it in, Mickelson turned in what his longtime caddy called, “the best round of his career”—a five-under 66 to win the Claret Jug by three strokes.

Talk about a clutch performance. That’s an eight-stroke turn-around from the start of the day to the end of the day. While Muirfield was chewing everyone else up, Mickelson was kicking its ass.

So how did Lefty do it? Well, he had a pretty solid day up through the 12th hole, sitting at one under par. But on the 13th hole the guy took his game to another level. He birdied that par three, then birdied three more of the last five holes.

Here’s his final putt on the 18th. Everyone knew it sealed the deal, despite the fact that there was still an hour of golf left to play:

They just held the 2013 ESPYs this past Wednesday, but I have a feeling that this performance might just earn Phil an ESPY in 2014.