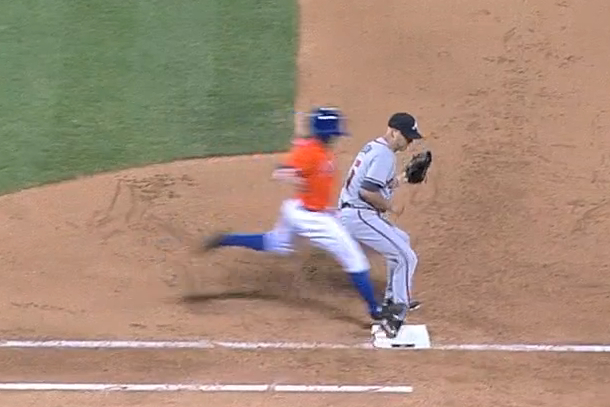 Last night, Atlanta Braves pitcher Tim Hudson suffered a gruesome injury you wouldn’t wish on anyone. Not even Alex Rodriguez.

With a four-hit shutout going into the eighth inning against the Mets at Citi Field, Hudson went to cover first base on a ground ball by Eric Young to the right of first baseman Freddie Freeman. Unfortunately, while Hudson got to the bag in plenty of time, he also planted his right foot square in the middle of it—right where Young’s foot came down as he made his final stride.

Immediately, anyone watching knew it was not going to be good. The 38-year-old pitcher crumbled to the ground in agony. However, the first replay of the incident showed that it was even worse than one would have imagined.

Take a look if you’re not too squeamish:

Obviously, that wasn’t Young’s fault. If you want to blame somebody, blame Hudson for blocking the base. But even that would be silly, because this is just one of those unfortunate things that happens on a baseball field from time to time.

In any case, the Braves say Hudson will have surgery on his broken right ankle in Atlanta as soon as the swelling goes down. It’s not clear right now how long he’ll be out, but I’d say it’s going to be a while.

Here’s hoping for a full and speedy recovery.