Someone Was Making It Rain at Safeco Field Yesterday (Video)
MLB

Someone Was Making It Rain at Safeco Field Yesterday (Video) 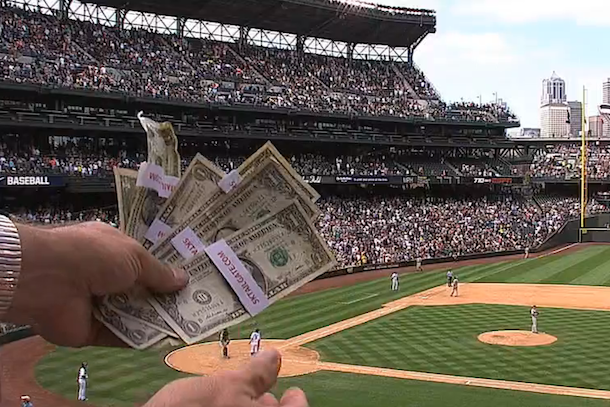 The good people of Seattle are pretty used to rain—but not the kind of rain they had at the Mariners game yesterday.

During the seventh inning stretch, somebody dropped a stack of 6,000 one dollar bills off the upper deck, making it rain money like Pacman Jones at a strip club, or Vince Young at a Nelly concert. Obviously, the stunt caused quite a commotion in the stands, and it ended up delaying the game for a few minutes while every last bill fluttered to the ground.

So what was that all about?

Well, it was actually a genius little promotional gimmick for a company called “5K Tailgate,” which organizes sports team-themed 5K “color runs” in various cities that double as crazy tailgate parties—and they try to make it seem like a nonprofit event, but it definitely is not*. The event they were promoting in Seattle was a 5K color run/tailgate party for Seattle fans the day before the Seahawks’ home-opener against the San Francisco 49ers on September 15.

Now, running three miles to a barbecue while people throw dye at me doesn’t sound fun to me, but I’ll admit, I’m not all that adventurous. If it sounds like fun to you, check out their website.

*You can volunteer at the event if you want, and “a portion of the proceeds” gets donated to a charity called Dollar Per Month. Keyword: a portion.