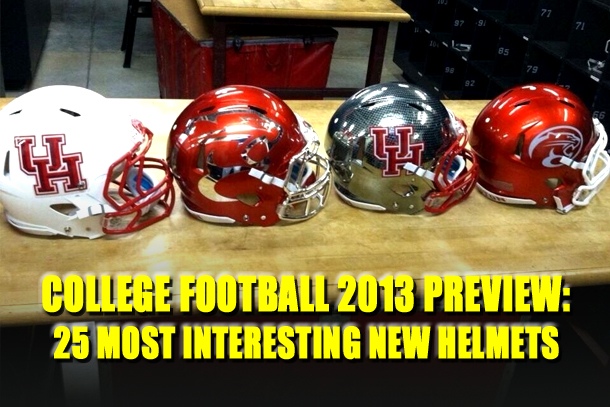 A few years back, the Oregon Ducks football team made a very significant discovery: sometimes football recruits will choose one school over another simply because they think they’ll look better in that school’s uniforms. Is that rational? Of course not. The uniforms you wear don’t affect whether you win or lose or wind up making millions of dollars in the NFL. But if I remember my own high school days correctly, high school kids aren’t always that rational.

In any case, Oregon started getting more and more creative with their uniforms, and now almost every program in the country is following suit. The result? This year there is an unprecedented number of new college football uniforms, and the most drastic changes you’ll see are the helmets.

Today we’re going to be taking a look at the most interesting new helmets of the 2013 college football season. And by “interesting” I do not mean “best.” Sure, some of the helmets you’ll see here are phenomenal. Others, however, are pretty terrible. I guarantee you, though, that they are all going to get noticed—and that’s pretty much the whole point.

Unless you're a field mouse, you probably don't find Owls all that terrifying. These helmets probably aren't going to change that—in my opinion they're pretty weak. 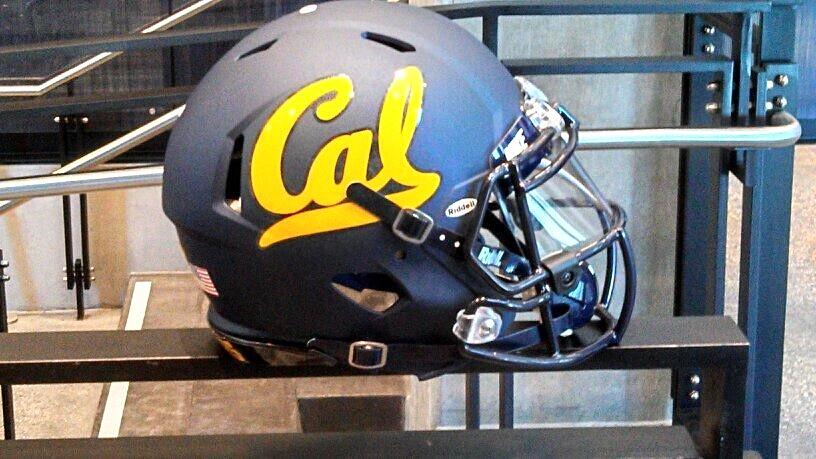 Cal didn't do a complete overhaul of their classic helmet. They just modernized it by going with a matt finish. 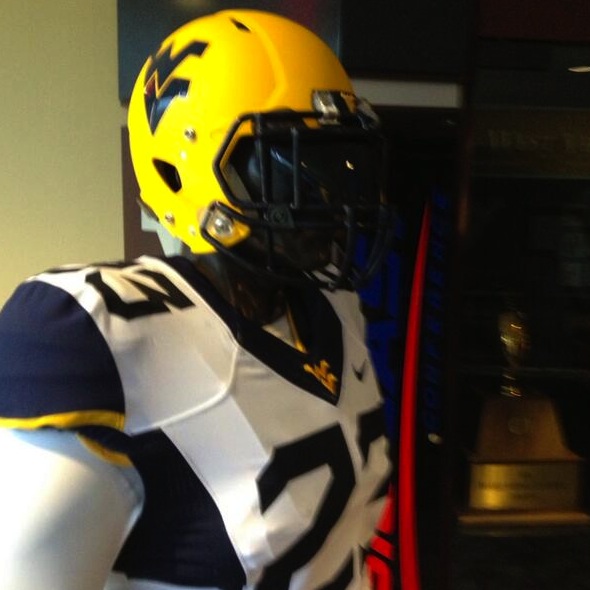 The Mountaineers haven't had a gold helmet since the 1970s, so that's a pretty big change. 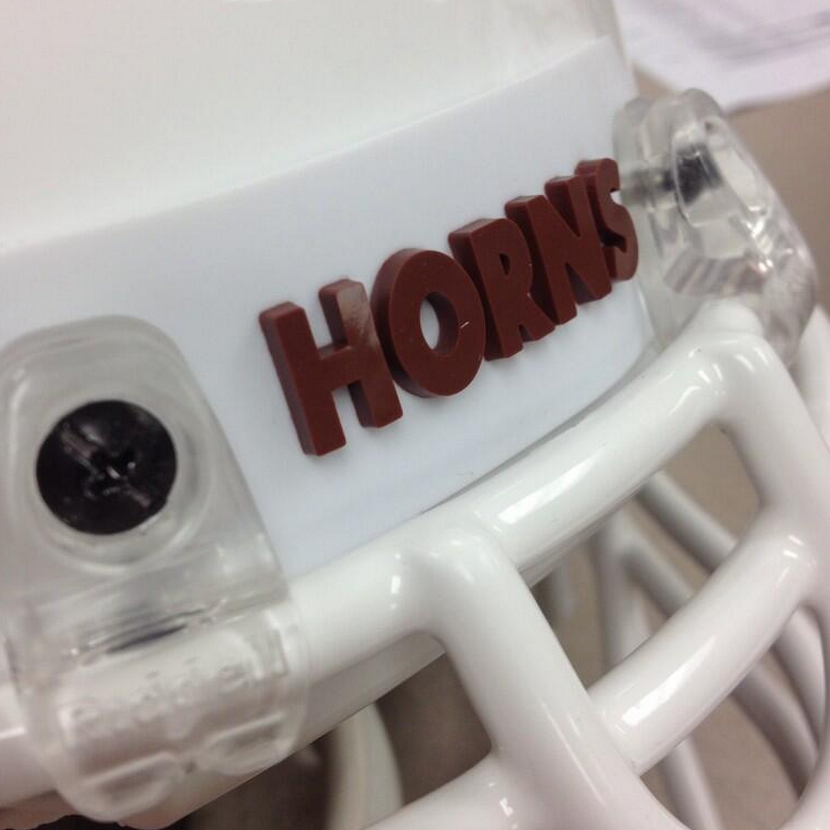 The Longhorns will still have their iconic steer silhouette   on the sides of their helmets this season. However, they did make one interesting little change: that three dimensional "HORNS" lettering on the front. 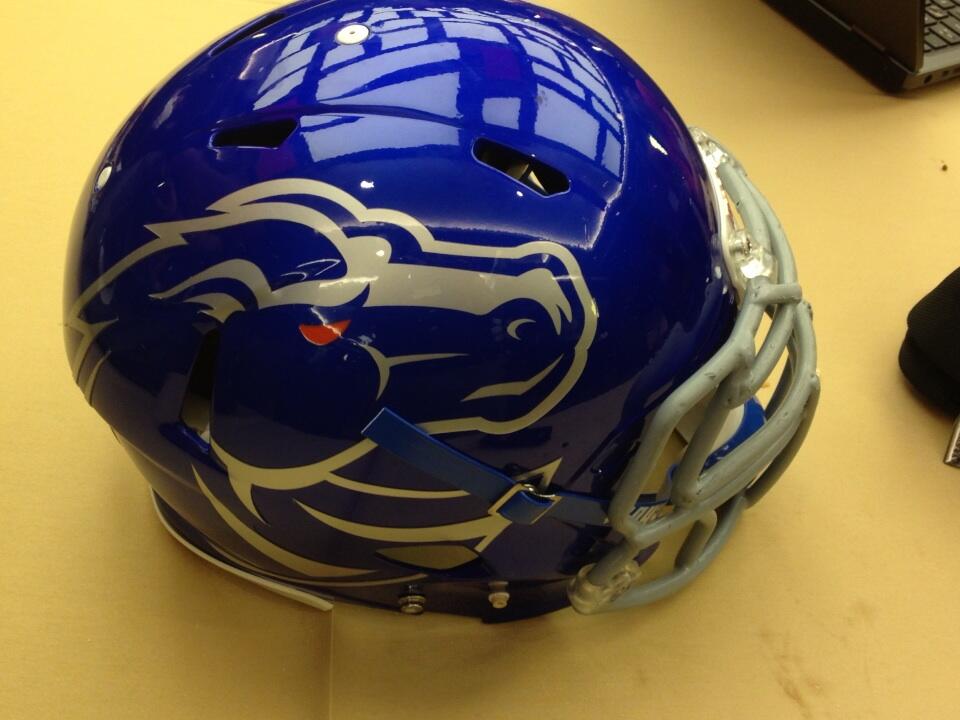 Boise State did not alter the basic design of the helmet this year, and that's a good thing because they have one of the best modern designs in college football. What they did do, however, is add a more traditional royal blue version...which we assume they will not wear at home, or else nobody will be able to see them against the backdrop of that blue turf. 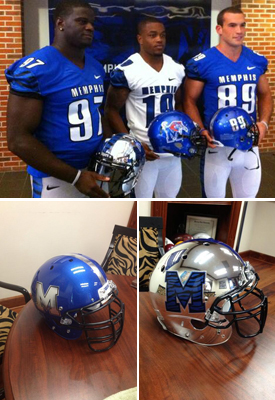 The Memphis Tigers new uniform combinations were chosen by alumni, and I must say they did a great job—especially with that chrome helmet with the tiger print M. 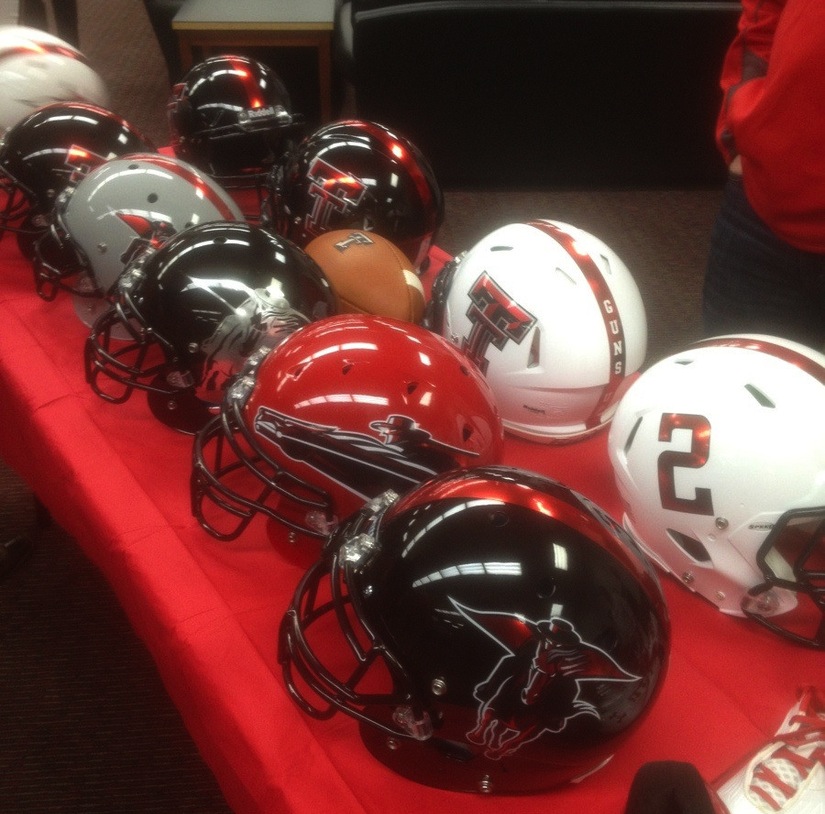 I have no idea if the Red Raiders are really going with a ridiculous six different helmets this year, or if, when this pic was snapped, they just hadn't decided yet. I will say, however, that I'm particularly fond of the all-black helmet with the chrome raider in the middle of the left row. 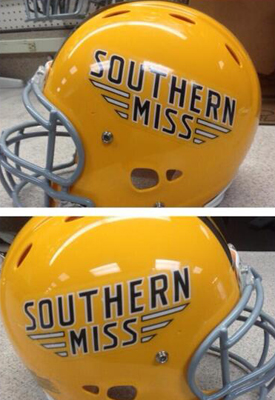 Some how, by simply inverting the color scheme of their existing helmet, Southern Miss (who went 0-12 last year...wow) stumbled upon a really awesome retro look that will really stand out amongst all the chrome and matt paint. 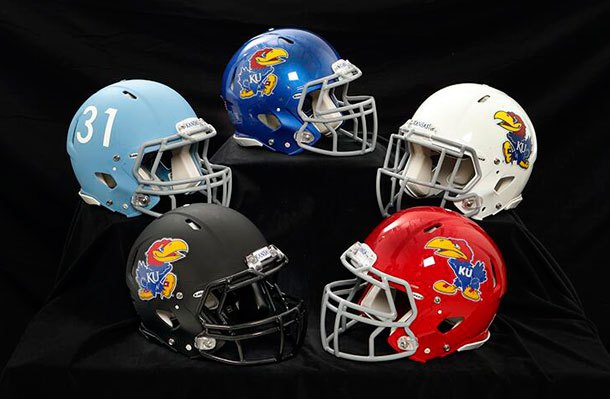 After years and years of the stupid "KU" on the side of their helmets, Kansas finally had the sense to go back to the Jayhawk. But seriously, though, five helmets? And a black one? Really? For some teams the "blackout" theme works, but I don't think the Jayhawks are one of them. 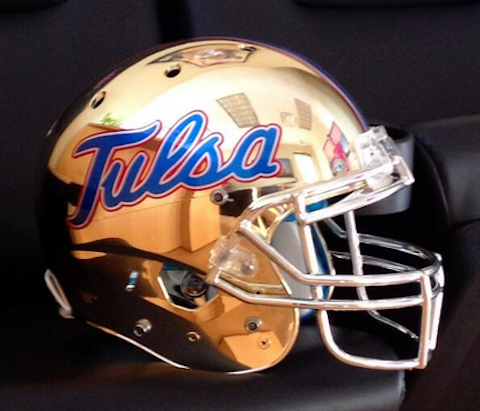 With a name like "The Golden Hurricane," a gold chrome finish is a great choice. I only wish they would have gone all out and come up with some new hurricane logo. 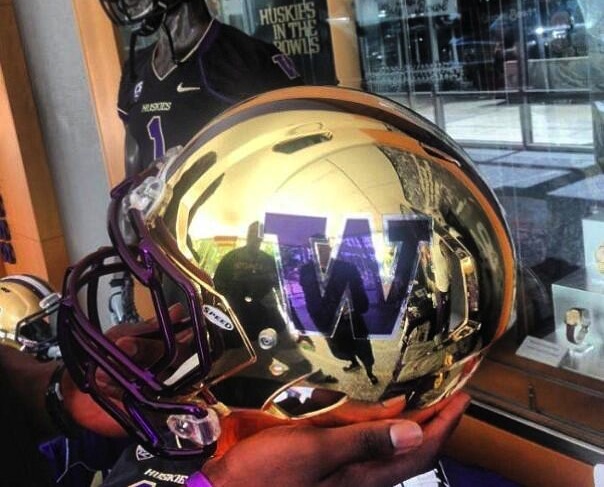 The Huskies have also decided to get in on the biggest trend in college football helmets, as have the... 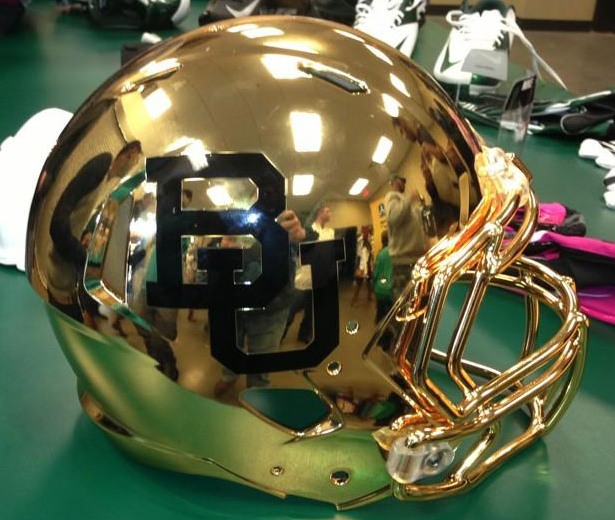 The new golden Baylor helmet wouldn't impress me at all if not for the golden face mask. Because of that, these guys are going to look like ballers this year. 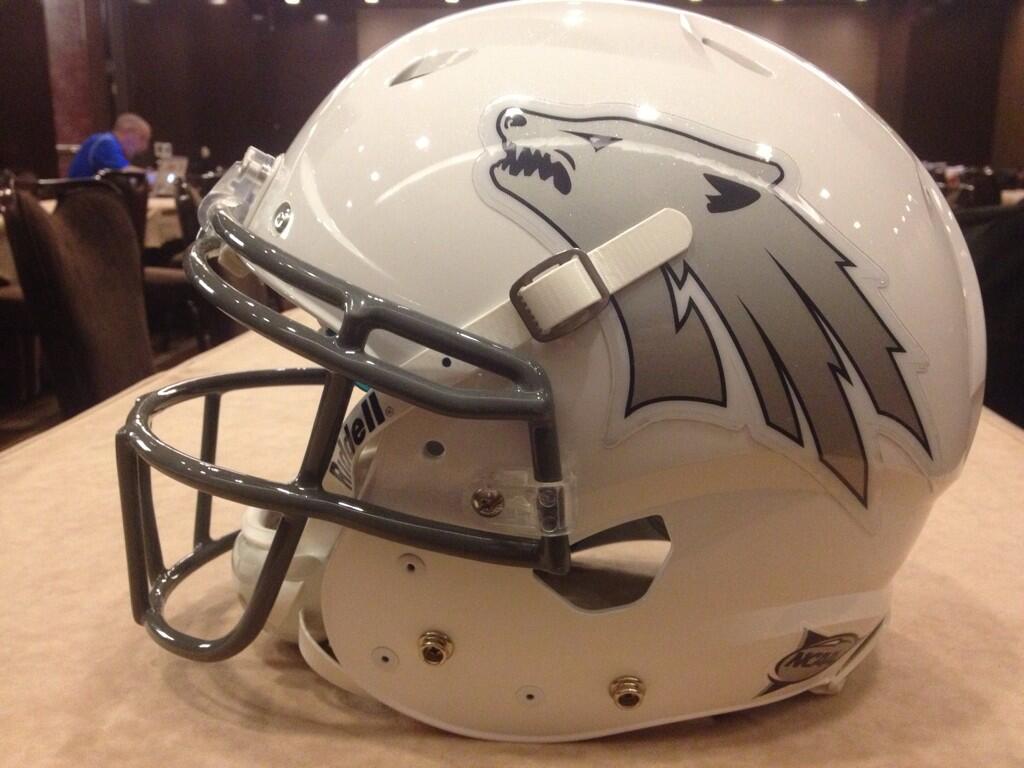 The logo and basic design haven't changed very much, but by going with gray-on-white the WolfPack have given themselves a more modern look.

I suspect people have mixed feelings about the Huskies' bold new design. Me? Not a fan. 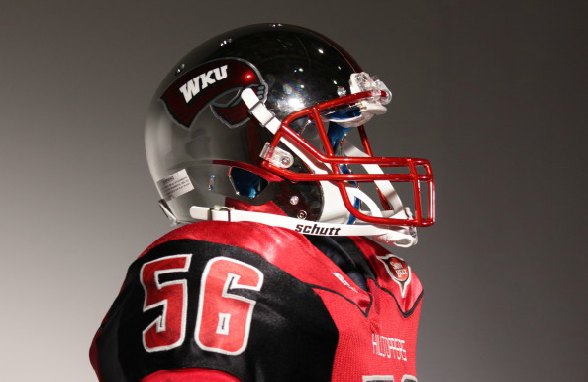 I still think the "Hilltoppers" is a dumb team name, but these new black chrome helmets are pretty badass.

The UCF Knights may not be a college football powerhouse, but they're going to look like a bunch of badasses in these gold and black helmets this year. It takes balls for a small program with little name recognition to go with a dichromatic scheme and no logo, so give these guys some credit.

The Broncos' helmets are easily among the most-improved this year. Their horse head logo has been badassified, and now they're added little oars to keep track of personal achievements—a symbol of coach P.J. Fleck's rowing analogy for the importance of teamwork. 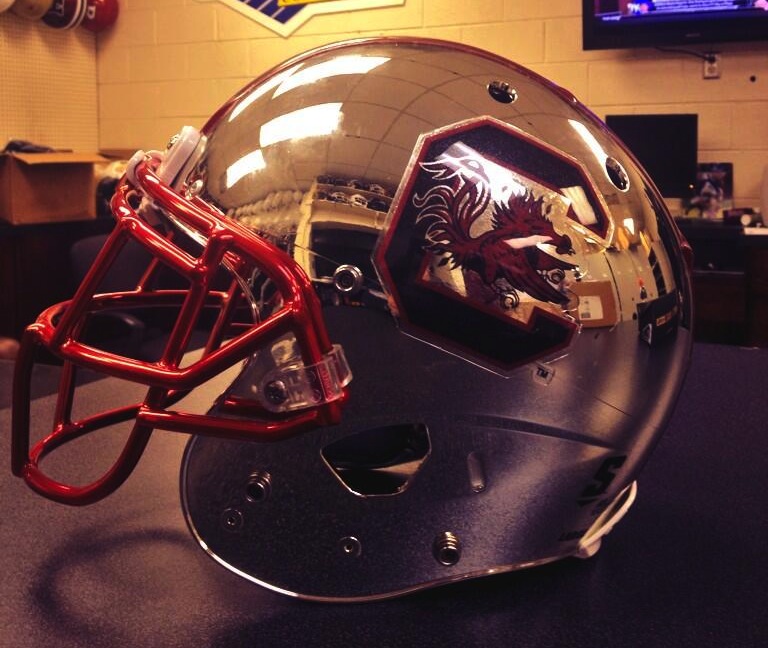 Despite being a football team named after a combative chicken, the Gamecocks are going to look pretty sharp this year. 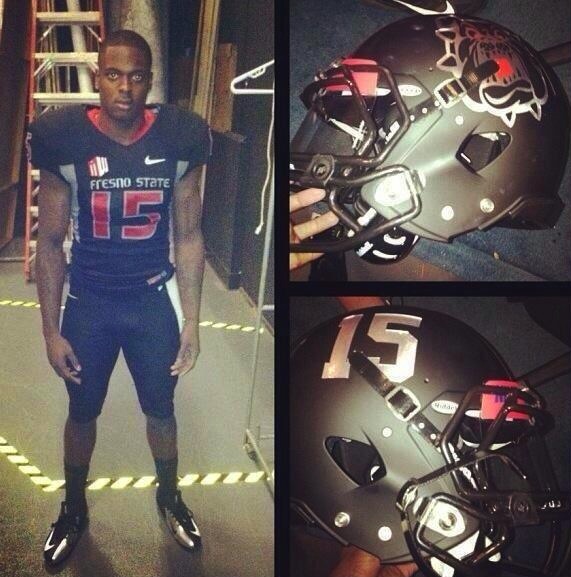 I myself prefer brighter colors, but if you're going to do the gunmetal tones thing (i.e., gray on black), this is the way to go. The Bulldogs are going to look sharp this year. 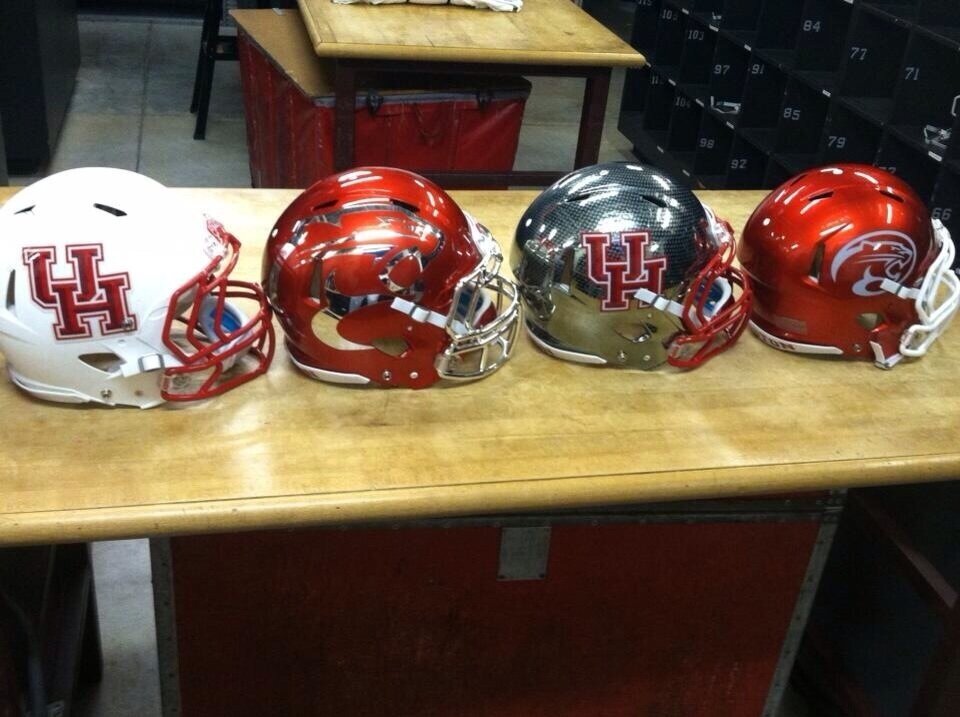 Okay, so their helmet with the huge chrome Cougar logo looks a bit like a ripoff of Penn State's Nittany Lion logo...but hey, Penn State doesn't put their logo on their helmets. 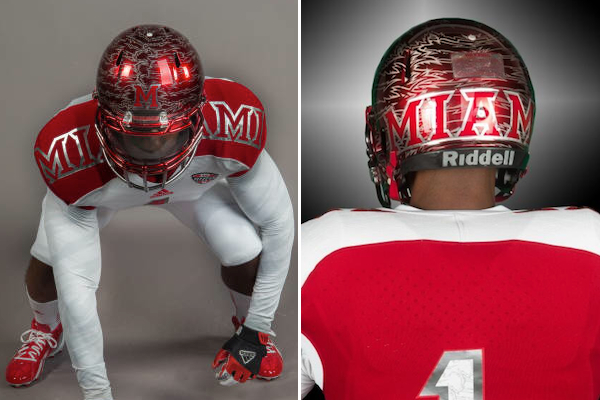 I'm not sure what that pattern is on the helmet, but I like it. 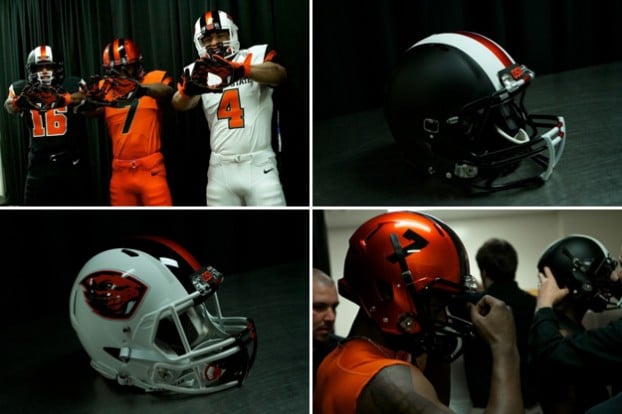 The award for "most improved helmets" (and logos and uniforms) has to go to Oregon State this year. With these sharp helmets they've created the perfect marriage of old school and new school. 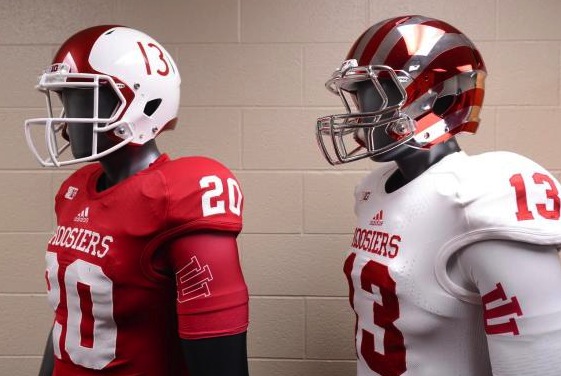 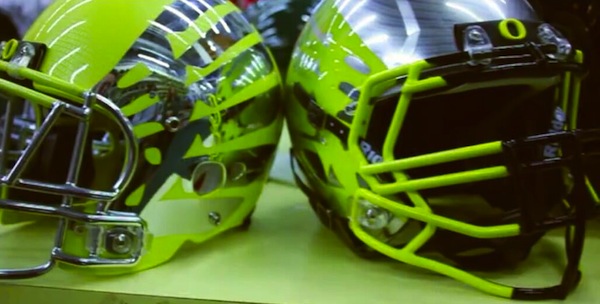 This year, the Oregon Ducks continue to innovate. These are probably their best helmets yet. 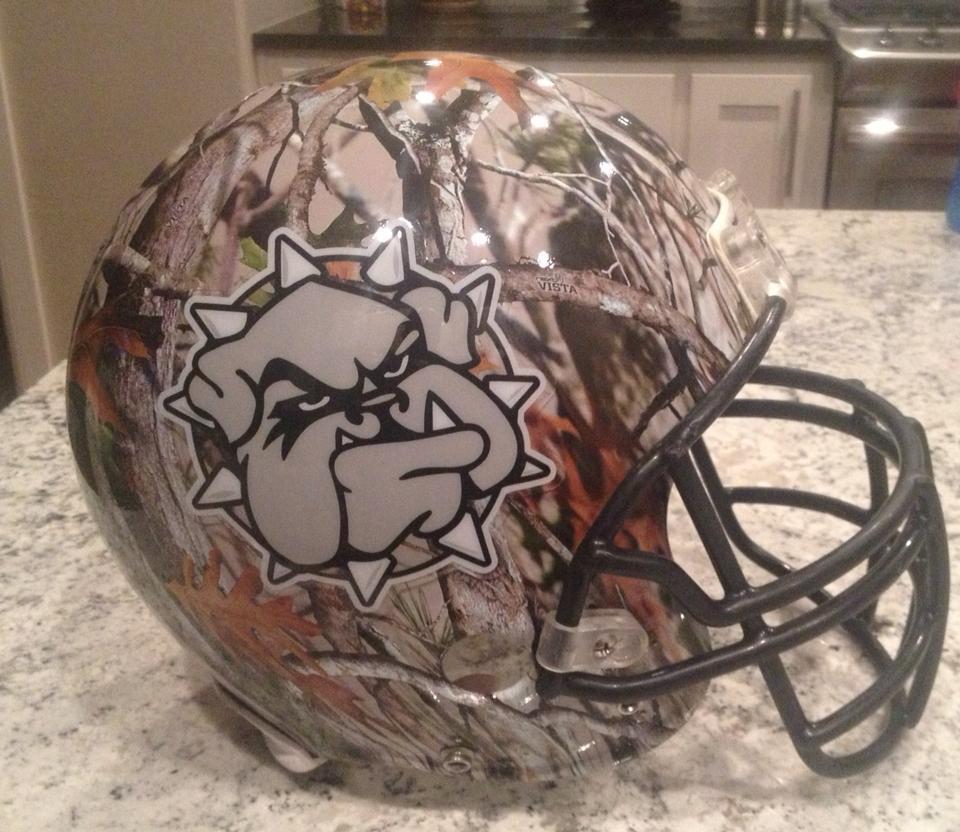 Congrats to the Southwestern Oklahoma State Bulldogs—now everyone has actually heard of your D-II program. The only downside is that it's because you've created the ugliest helmets in the history of football.