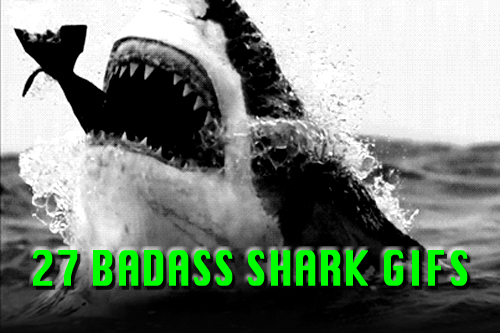 I don’t know about you, but I’m enjoying the hell out of Shark Week. There’s no better way to unwind after a long day at work than watching terrifying sea creatures tear cute sea creatures to bits with their ferocious teeth, amiright?

Of course, like all good things, Shark Week is going to come to an end eventually. (I’m guessing Friday, since that’s when they say it will end.) And then what are we supposed to do?

Well, I’ll tell you what. When SW is over and we’re in need of a shark fix, we can just come right here and check out these badass shark animated GIFs. They won’t give you quite the same high that a week’s worth of primetime HD footage will, but they can tide you over.

Yo school of fish, that's a shark. Get out of the way.

For some reason, the fact that this is grainy black-and-white footage makes it even more terrifying.

We told you about this guy a few months back. He is the reason we will never go kayak fishing. Ever.

Um, hey Bob, there's like, a shark, swimming right for your head. FYI.

I'm glad sharks don't really smile. They're scary enough as it is.

Ditto what I just said about smiling for laughing. Nobody needs any of that.

Get it? He's so despicable that the sharks are no match for him! Oh the hilarity. (Warning: the next one is gruesome.)

Take that you drunk curmudgeon! You're shark food now. On a side note, if a shark eats a drunken fisherman, does it get drunk?

I'm sorry, slapping the shark's nose is the incorrect response. We were looking for get the [email protected]#& out of there. But thanks for playing "What Would You Do If A Shark Tried to Eat Your Boat?"

Pro Tip: if the shark has it's mouth around your camera lens, you are too close. Now you know.

Hey everybody, goblin sharks are messed up. Stay the hell away from these Alien-like creatures.

If you've ever wondered what it would be like to get attacked by a shark while scuba diving...well, here you go.

This is how I imagine we will all get around in the future, when all the earth's polar ice has melted and everything is underwater. The shark will be the new horse...only it can eat you.

This GIF is just two images, and yet it's still so horrifying. Well done, Eric H. Cheng. Well done.

If sharks are for gay rights, who am I to be against? After all, they've been around for like 400 million years, and we've only been around for a couple hundred thousand. Evolutionary speaking, they must be doing something right, you know?

That's like ten too many sharks for my taste. I hope this was a robot camera or something.

Sharknado was pretty much the best idea in the history of basic cable. Well, after Shark Week, anyway. PS, the next GIF is pretty gory, so...

When I was a kid, my cousin wouldn't go swimming at the family lake for years after she watched Jaws for the first time. Thank God Sharknado wasn't around back then, or she would have locked herself in her bedroom and never come out. Warning: if you haven't actually seen Sharknado, the next GIF contains a pretty rad spoiler.

And that, ladies and gentlemen, is how you kill a flying shark with a chain saw.

This is how Kris Humphries wishes he had dumped Kim Kardashian.

This seal was no match for this gigantic shark. I'd like to see him pick on somebody his own size...

One can't help but pity the shark who dares tangle with Mr. T. Even as a cartoon, the guy is a total badass.