13 Most Notable Celebrity First Pitches of 2013 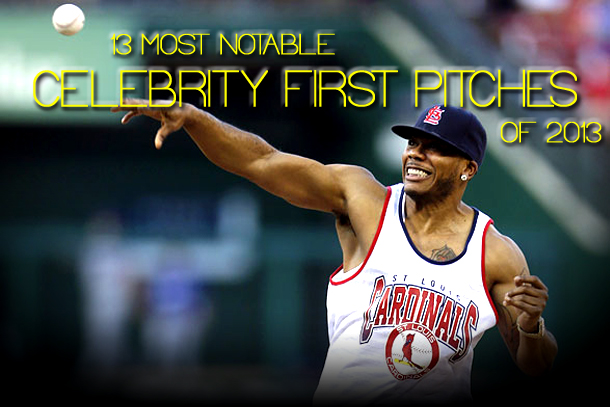 The ceremonial first pitch exists for several reasons. One is to pay tribute to special people that are deserving of some attention or recognition. Another is to suck up to powerful rich people, like politicians and CEOs. But probably the biggest reason, or at least the most common, is to entertain fans and provide celebrities with mutually beneficial PR opportunities.

So why are we so fascinated by celebrities throwing out first pitches? Well, I would say it’s partly because we’re just obsessed with celebrities in general, and partly because we secretly want to see them totally blow it so we can say, “yeah, that guy may drive a Maserati, but at least I can throw a pitch over the plate!”

As for 2013, so far there have been a lot of celebrity first pitches. However, today we’re going to look at the 13 most notable cases.

What makes them “notable,” you ask? Well, there are a number of factors, but it basically comes down to one or more of these four things: (1) how famous they are; (2) how attractive they are; (3)  how well they did, and (4) how poorly they did.

Olivia Munn is pretty famous for a comedic actress who has achieved so little. Now, that's not me trying to slam her work. I'm not trying to be mean. It's just a subjective statement of the facts as I see them. I mean, what are the biggest items on her resume? Probably her relatively short run on The Daily Show, her relatively short run on The Newsroom, and a bunch of bit parts in movies and some failed TV shows. Nevertheless, here she is throwing out the first pitch at the Dodgers game on June 10. It's almost like being ridiculously good-looking is good for your career or something.

Urban Meyer can't show his face in the state of Florida after using a health scare to "retire" from football—i.e., ditch the broken down, somewhat corrupt Florida program he helped build. However, in Ohio, after leading the Buckeyes to an undefeated 12-0 season, Meyer is a pretty popular guy. Thus, on June 13, the Cincinnati Reds invited him (and his son) to throw out the ceremonial first pitch.

Nelly, as you probably know from all of his songs, album covers, and clothing, is a proud St. Louisan. And after years of expressing his home town pride, this year the Cardinals decided to return the love by holding a "Nelly Night" at Busch Stadium on August 6. No joke. Obviously, "Nelly Night" included the man of honor throwing out the first pitch. A really bad first pitch.

Nelly wasn't the only rapper to throw out a first pitch this season. Lil Jon did the honors at Dodger Stadium on May 24. He's not from Los Angeles, of course. (Is anyone?) In fact, Lil Jon is from Atlanta, which means he's probably a Braves fan. But hey, when the Dodgers invite you to throw out the first pitch, you can't really say no, can you?

Given that Bryan Cranston is the star of the most talked-about show on television right now—Breaking Bad, which is in the middle of it's final season, in case you didn't know—it was a no-brainer for Hollywood's official MLB franchise to invite him to throw out the first pitch on July 26. Was it a great pitch? Not really. But he looked good doing it.

Oh come on, kids, don't tell me you don't know who Buzz Aldrin is! He's only the founder of Buzz Feed, which means he's kind of a big deal. Nah, I'm totally kidding. Buzz Aldrin didn't found Buzz Feed. He invented penicillin, so he got to throw out the first pitch at the Dodgers game on May 27.

It's quite possible that, unless you're a big fan of Fairly Legal or Person of Interest, you don't know who Sarah Shahi is. However, I suspect that after watching her first pitch at the Dodgers game on June 24, you're already a huge Sarah Shahi fan.

I'm going to be honest with you: before I started working on this list, I had no idea who Jenna Marbles was. Then I did a little research (i.e., I googled her name) and discovered she is an extremely popular YouTube personality—which apparently is a thing. So why did I include her on my list of notable celeb first pitches if I didn't even know who she was? Well, that right there is why: I was fascinated to discover that somebody can become famous enough on YouTube alone to get invited to throw out the first pitch at the Dodgers game. Also, she threw a pretty badass strike.

The Danish drummer of Metallica threw out the first pitch at AT&T park on May 3, the same day James Hetfield and Kirk Hammett performed the National Anthem on guitar. Why, you ask, was this more interesting than the John Popper (Blues Traveller) or Geddy Lee (Rush), who have also thrown out first pitches in 2013? Because "Enter Sandman" is the official theme song of the greatest closer in the history of baseball, Mariano Rivera. That's why.

Don't be fooled by this little news piece, folks. Sure, here you see him throw a surprisingly great ceremonial first pitch strike back on July 31. But that was actually his second attempt. On his first attempt he did this. I guess when you are Cristiano Ronaldo you get a do-over.

Indian Jones threw out the first pitch at the Dodgers game back on April 15. Personally I think it would have been much cooler if he'd used a bull whip, but that's just me.

Ah yes, you know this one would be on here, didn't you? On July 14 Carley Rae Jepsen threw out a first pitch at the Trop in Tampa that was so bad, people were actually comparing it to the infamous Baba Booey first pitch. On a side note, is Carly Rae Jepsen really still considered "famous"? I thought her 15 minutes were over.

The most notable first pitch of 2013? That would be Colin Kaepernick's effort on June 21. The former draft pick of the Cubs and current superstar quarterback of the San Francisco 49ers threw a an 87 mph fastball to Sergio Santos. Like a boss. How could that not take the #1 spot?