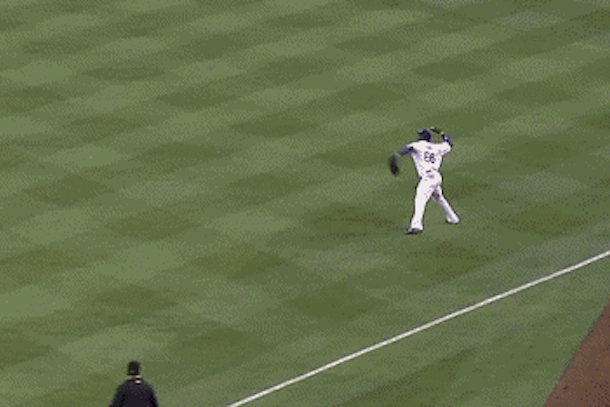 Los Angeles Dodgers outfielder Yasiel Puig has been one of the biggest stories in baseball this season. He started out in the minors, but since the Dodgers brought him up to the big leagues on June 3, the 22-year-old Cuban has hit .368 with 11 home runs, 27 runs batted in, and 47 runs scored.

However, it’s not just his production at the plate that makes Puig so remarkable. While it may be the primary reason for all the hype, the kid has some serious defensive tools as well—most notably, his arm.

How good is it? Well, last night with the Mets in town taking on the Dodgers at Dodger Stadium, Marlon Byrd tried to go first-to-third on a bloop single to right by Justin Turner, and…well, that was a mistake.

That, my friends, is a cannon. And the best part about this for the Dodgers is that, once everybody realizes what this guy is capable of, his value won’t simply be that he can throw lots of guys out. It will be that teams don’t even try to run on him. That’s what great outfield arms do—they make teams less aggressive on the base paths.