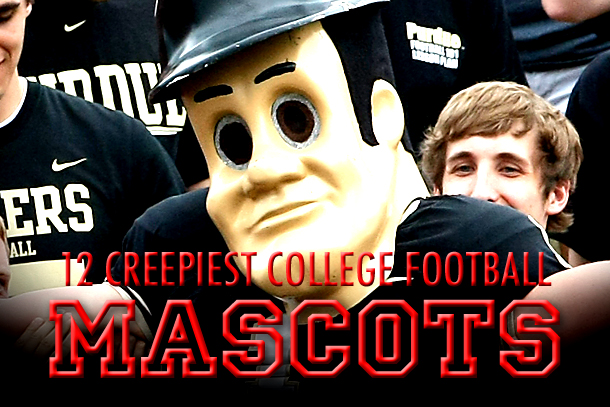 The 2013 college football season kicks off in just under two weeks. But before everyone gets preoccupied with the important storylines—like what Johnny Football ate for breakfast, or who will earn the right to lose to an SEC team in the BCS National Championship Game—we really should take a moment to pay tribute to one of the best things about college football: the creepy mascots.

Seriously, have you ever paid attention to these things? Pretty much any mascot is creepy almost by definition, but college football still takes the cake. And I’m not talking about weird team names here. You can chalk those up to the fact that college football has traditions dating back to the 1890s that just don’t make any sense today. I’m talking the actual mascots—the dudes dressed up in the costumes. Regardless of what they’re supposed to be, they don’t necessarily have to look so disturbing…and yet so many of them do.

But who am I kidding—you know what I’m talking about. So let’s just get to the countdown, shall we? 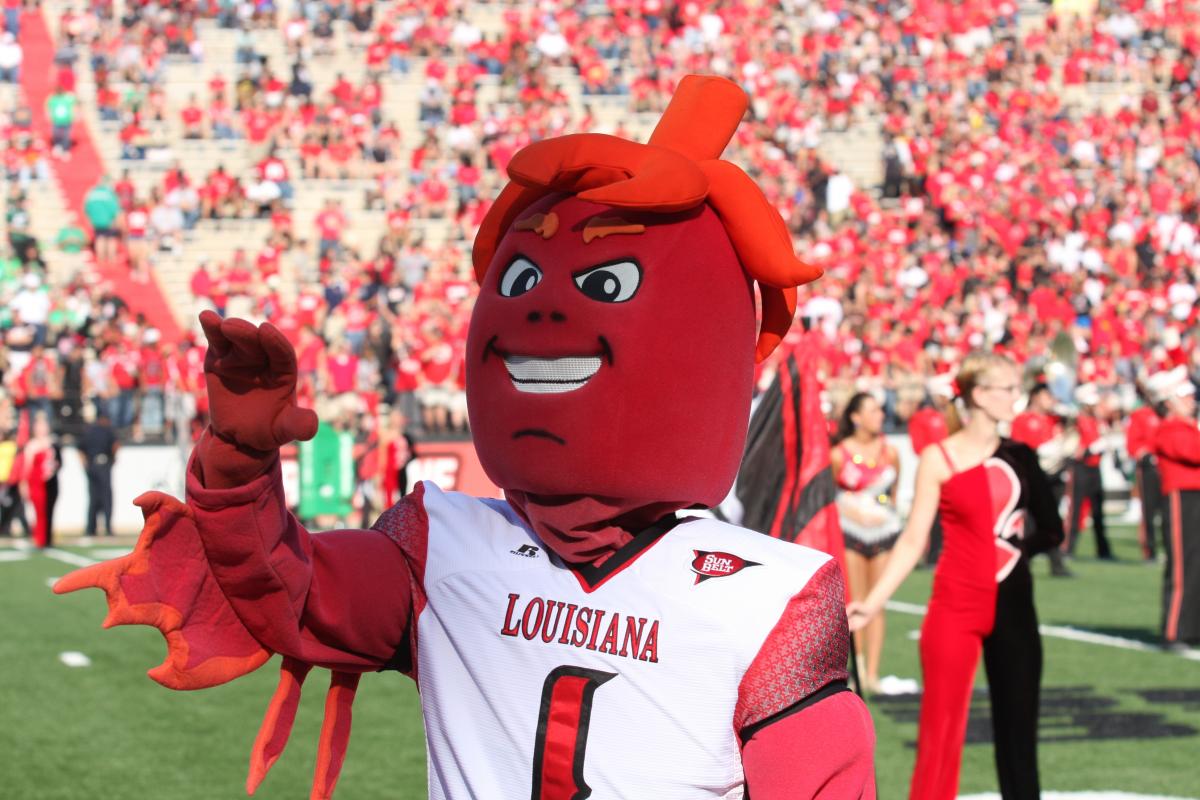 I love the fact that Louisiana-Lafayette changed their team name to the Ragin' Cajuns back in the 60s. It really is one of the best team names in college sports. However, their  mascot, Cayenne—who, in case you couldn't tell, is an anthropomorphized cayenne pepper—is just creepy as hell. He looks like the evil twin brother of Captain Planet, the creepiest and lamest "superhero" of all-time.

Officially, the Delta State (Division II) football team is named "The Statesmen," which is pretty boring. Unofficially, they are the fighting okra. Apparently the tradition of a guy wearing a big green okra suit and boxing gloves began some time in the 80s, because...well, I have no idea. I will say this, though: anthropomorphized, vaguely phallic vegetables give me the creeps. 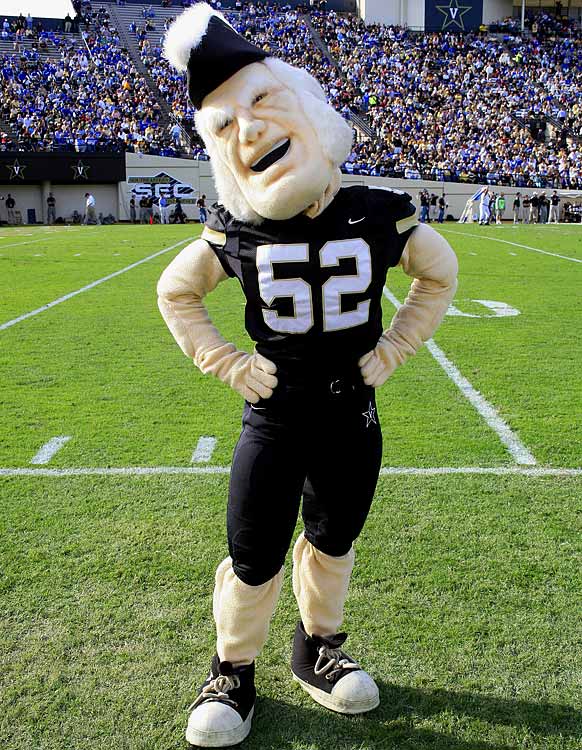 I can't quite put my finger on the creepiness of the Vanderbilt Commodore. Is it because that look is perpetually frozen on his face? Is it because he is pale as a ghost? Is it because, in my head, he bears a subtle resemblance to that pedophile character on Family Guy? I guess it's probably a little bit of everything. 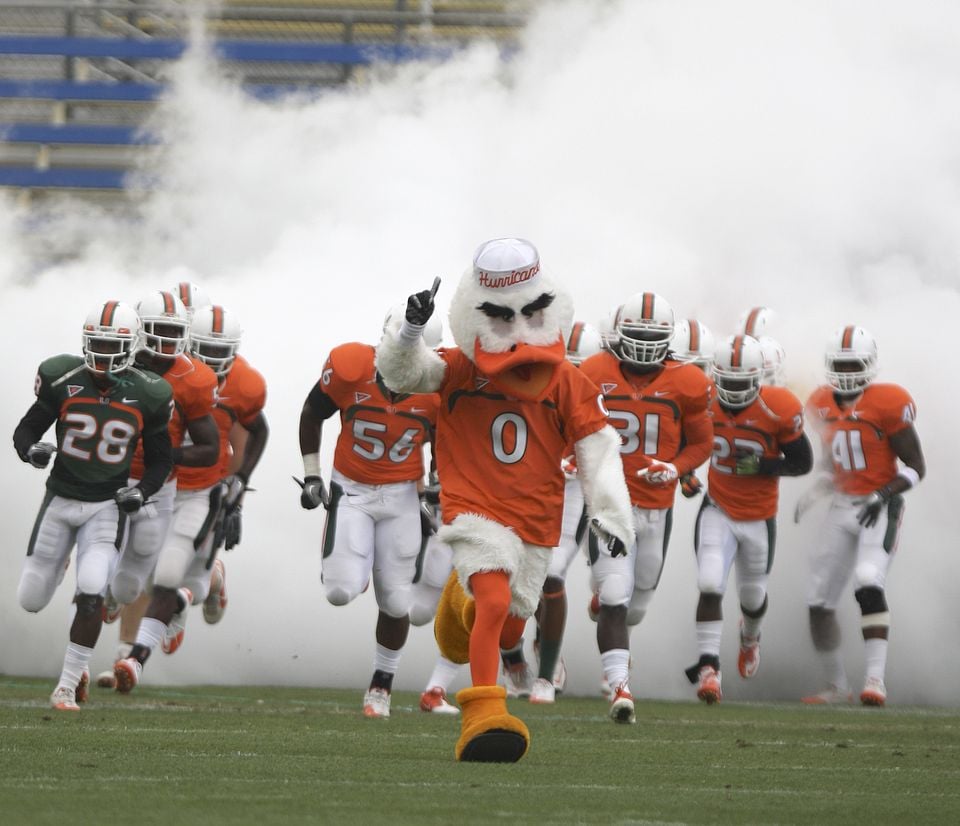 I'm not even going to get into the fact that this guy looks like a freakin' duck when he's supposed to be an American White Ibis. I'll just keep things un-zoological and only mention the fact this Sebastian, with those horrifying Eugene Levy-esque eyebrows, looks the bastard child of Satan and some poor, unsuspecting water fowl. 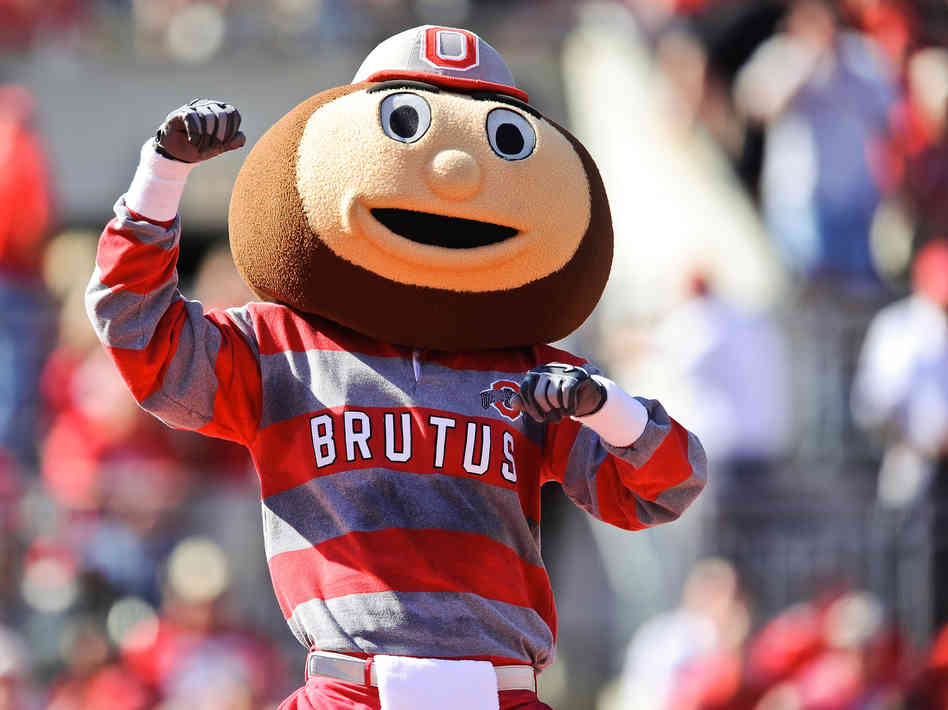 Do you know what a buckeye is? It's a nut with a dark brown body and a light brown or white spot in the center. Obviously, it's the state tree of Ohio and, for some bizarre reason, a source of pride for the state's inhabitants. (Who takes pride in a nut?) This should help you understand what the hell is going on with Brutus, here. His head is a buckeye nut. Of course, you didn't really need to know any of that to see that this is one creepy mascot. 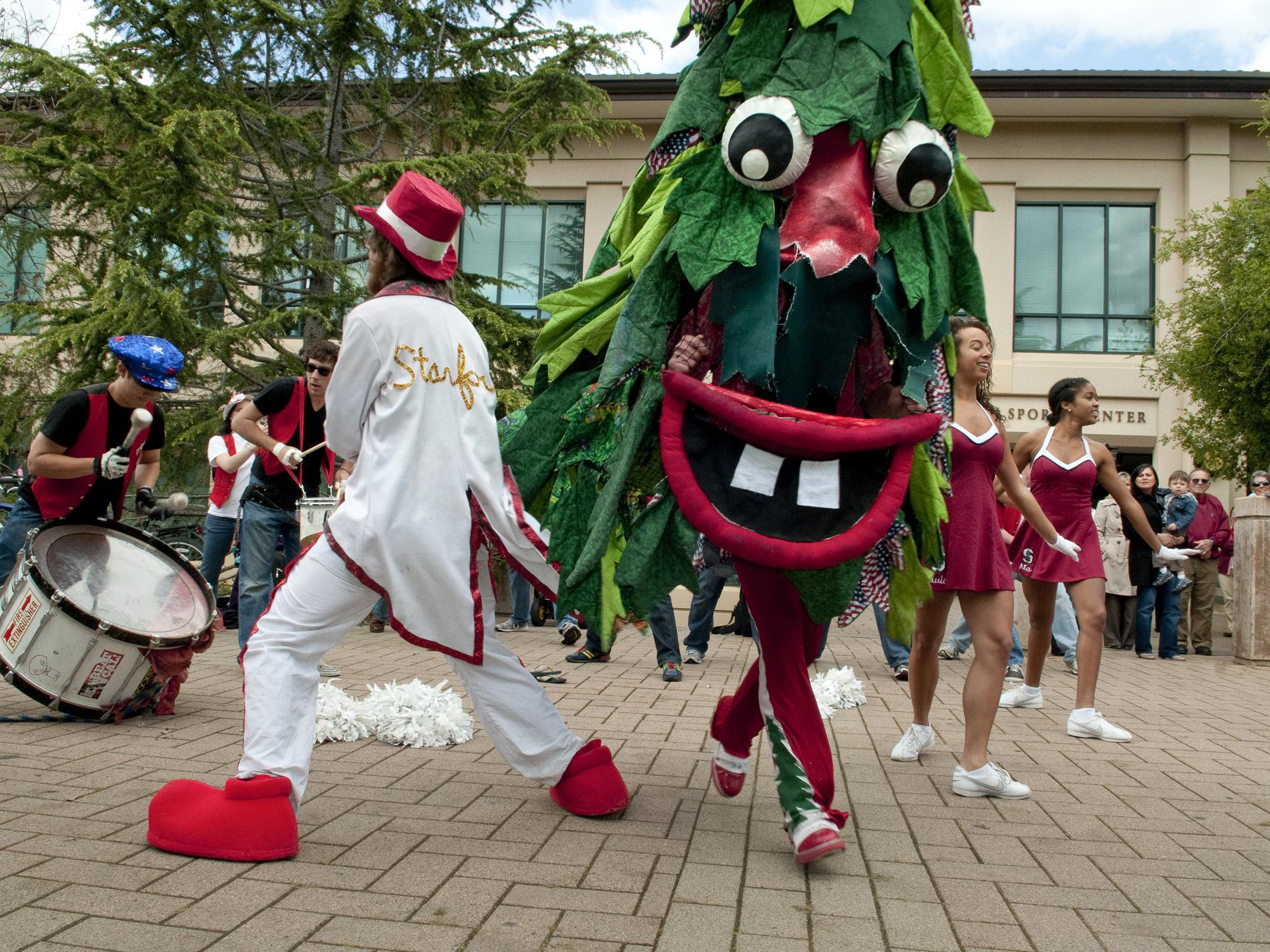 Officially, the Stanford Cardinals have no mascot. Unofficially, however, they have the Stanford Tree, who is portrayed each year by a member of the pep band who designs and creates the costume his- or herself. That's right. The Stanford Tree costume is homemade. So no wonder it's so disturbing. 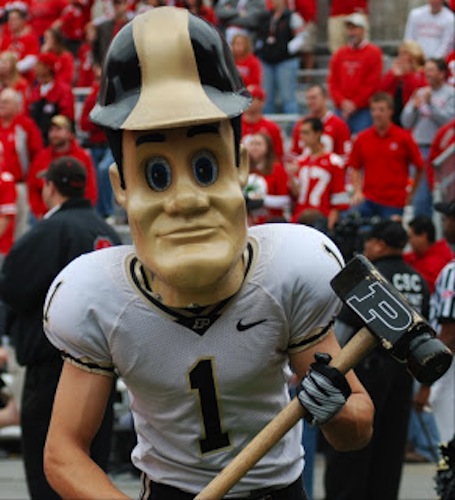 Nothing wrong with the idea of Purdue Pete, a caricature of the eponymous Boilermaker. It's the way the idea was executed—or to be more specific, it's the way the vacant stare of the mask and the sledge hammer make Purdue Pete look like a serial killer. 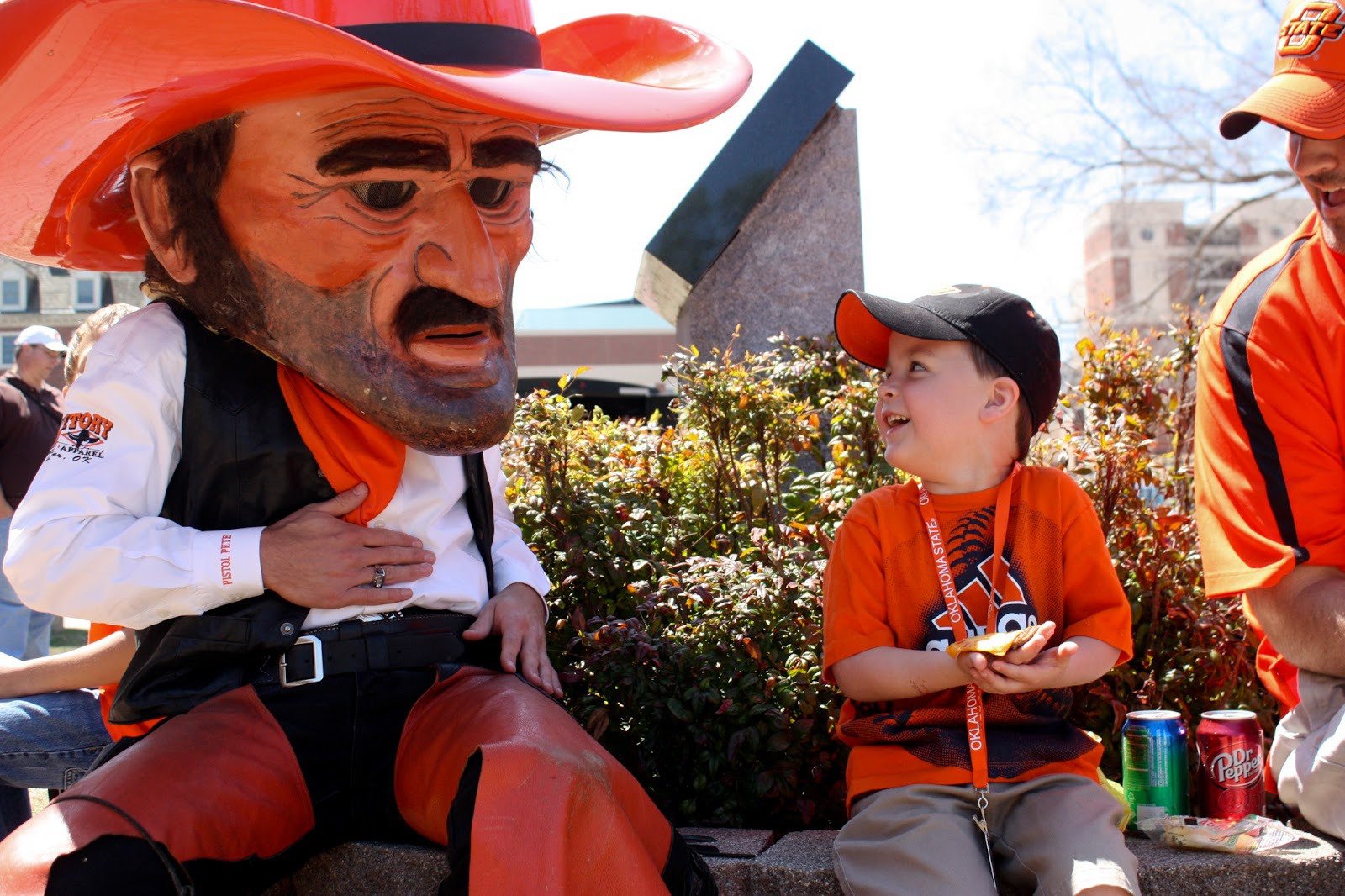 And speaking of utterly terrifying masks, here at number five we have Pistol Pete. I know he's supposed to be a grizzled old cowboy, but, in certain contexts (like the one pictured here), he definitely looks like a creepy old pervert. 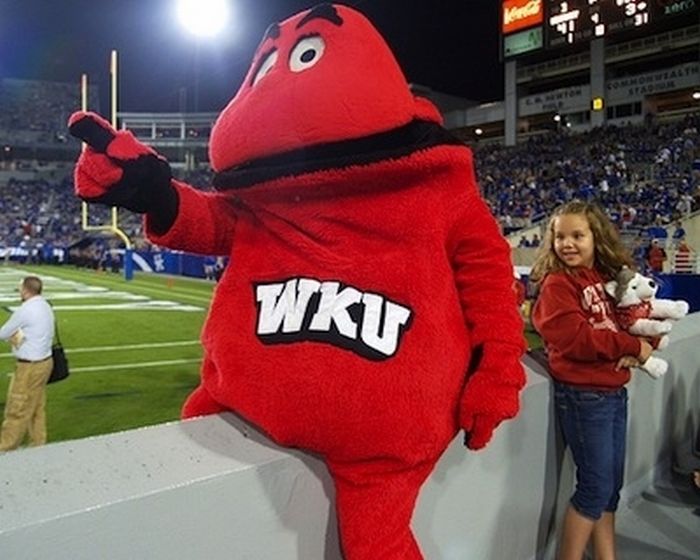 I suppose there are people out there who do not find Big Red creepy at all, and that's totally fine. Everyone is entitled to their own feelings. However, I find the WKU mascot thoroughly unsettling in pretty much the exact same way I find the McDonald's character Grimmace unsettling. And I'm pretty sure I'm not alone. 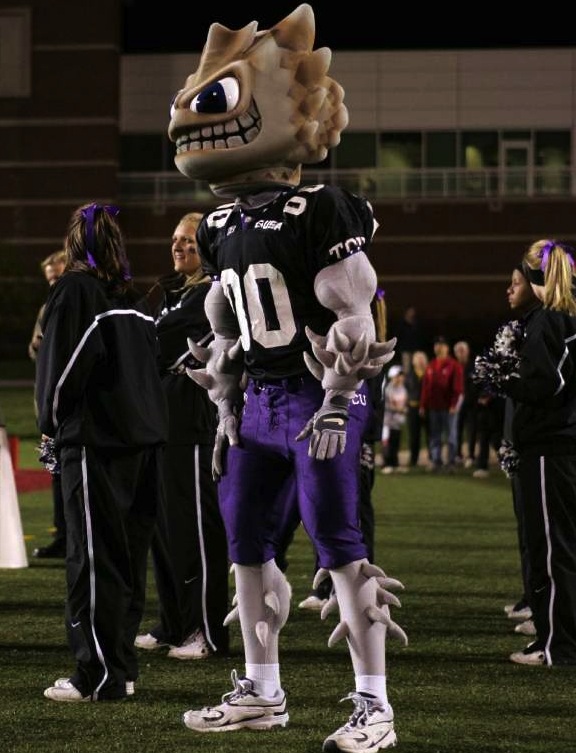 You know what makes the TCU Super Frog so creepy? The fact this is actually a pretty good likeness of the Texas horned lizard, known locally as the horned frog. I mean, it's one thing to think that this mascot just came from the imagination of some weirdo, but another thing altogether to realize you might stumble upon a creature that looks just like this (albeit much smaller) while out walking your dog. 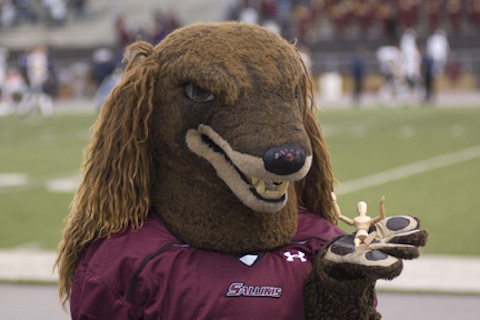 Salukis are a gorgeous, ancient breed of dog. There's nothing wrong with naming your college sports team after them. However, the Saluki mascots created by Southern Illinois are some of the creepiest things I've ever seen. They look more like the Egyptian god Anubis (the dude with the head of a jackal) than actual salukis. This guy, by the way, is called Brown Dawg. His mascot brother, who is just as disturbing, is Gray Dawg. 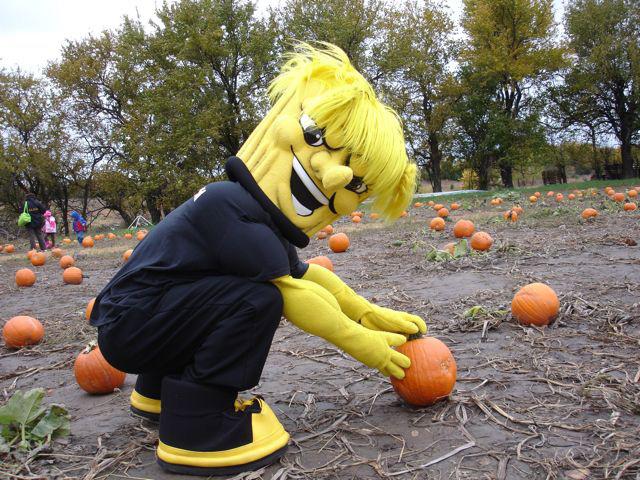 I can get over the fact that the Wichita State football team is called the "shockers." It's weird and, given relatively recent developments in college slang, gross. But a shocker is a person who harvests wheat and bundles it into "shocks." So why on earth is the Shocker mascot an anthropomorphized shock of wheat rather than some farmer dude? The Nebraska Cornhuskers' mascot isn't an ear of corn. It's a farmer dude who husks the corn. But fine, okay, let's just forgive WU for choosing a shock of wheat as their mascot. Why did they have to make him look like a demonic cross between Bart Simpson and SpongeBob SquarePants?