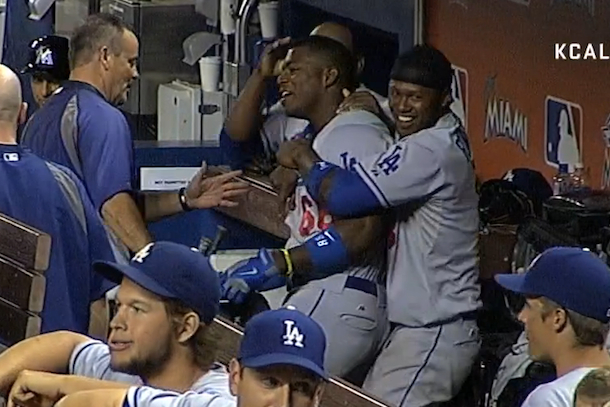 Just how good is Los Angeles Dodgers rookie sensation Yasiel Puig? He’s so good that even when he gets benched, he still wins games for his team.

Mangers Don Mattingly made the decision to bench Puig on Tuesday night in Miami because of some recent struggles at the plate. Then the kid, who has displayed a penchant for making lots of rookie mistakes lately, showed up to Marlins Park 30 minutes late, which earned him a fine. Thus, it really wasn’t looking like Puig’s night.

However, Mattingly pulled a double-switch in the 6th inning and put Puig in as a defensive replacement. So of course, leading off the top of the 8th inning, Puig hit a home run to put the Dodgers on top of the Marlins for good, ending their little two-game skid.

In sports, there are some athletes who just seem to have a flair for the dramatic. So far, Yasiel Puig is definitely one of them. It should be pretty damn fun to see what this kid does in October.