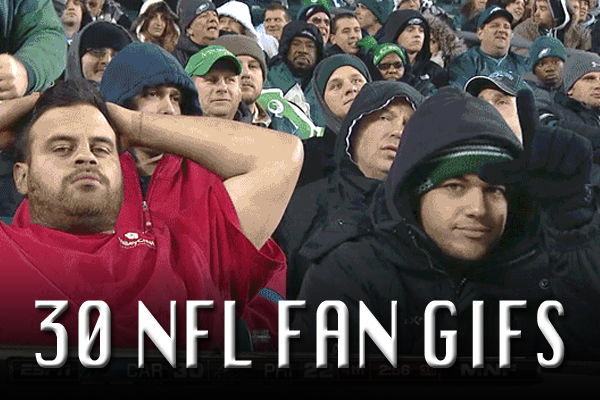 In Major League Baseball they play 162 games. As a result the fans really have to pace themselves. They don’t want to go bonkers in first few weeks of the season and burn out before their team even gets started. However, in the NFL there are only 16 games and only eight of them are played at home, which means no restraint is necessary. NFL fans can just feel free to go completely bonkers and expend pretty much all their energy from day one—and this is what makes them so damn awesome.

Today, as we head into week two of the 2013 NFL season, let’s take a moment to celebrate the fans. What would NFL football be without them?

NBC gave us a pretty good look at the real Denver Broncos cheerleaders during the season-opener against Baltimore last week. These folks? Not as good.

Losing 48-0 will put a petty sour look on your face, even if you are wearing a Santa hat.

Now this guy was into it. Look at all that passion—such a serious look, such a powerful air punch.

This right here pretty much sums up what it's like to be a Houston Texans fan. Every year it looks like they're going to get over the hump, and every year they fall flat.

27. The Texans in a Nutshell

Did this guy step on a live wire or something? Either way, the longer you watch this, the more he starts to creep you out. (Go on. Try it.)

Wouldn't it be hilarious is actual Vikings wore bright purple and gold outfits?

Now Sean Payton is the coach of the New Orleans Saints again, but for all of last year, while serving his "bounty-gate" suspension, he was just a fan...a fan with no understanding of how binoculars actually work.

How do I like you now? Well, sir, to be perfectly honest with you, I don't like you one bit. Thanks for asking, though.

When Packers fans get hungry, they'll devour the first person that happens to wander across their path. In this case? Yep, that's Steve Mariucci.

It's bad enough that this guy had to watch football in the rain. But then he has to deal with bad calls from the officials? No. No way. He's not going to stand for that.

Look carefully. Do you see it? The lady with the long scarf around her neck, giving the Saints' Lance Moore the finger? Yep, that's a classy lady alright.

I'm not a lip-reading expert, but I think I've got this one. She's upset about the ball shed, right?

19. Another Pissed Off Raiders Lady

Yep, that's it. Don't discriminate. Just give everybody in your section the finger. Even that cute kid sitting two seats for your right.

I know it's hard to maintain a high level of enthusiasm during blowouts. Still, have a cup of coffee or something, man.  Don't do this.

Yay! My team did something right! Wait, what the hell do we do now? Oh, I've got it. I'll just grab this guy here by the head and put his face in my crotch.

One look from the dude in the Jets jersey and this woman just shuts the hell up. If only it were that easy to shut up any loudmouths.

Let's put aside the fact that the Eagles fans are turning on their own team here and simply look at what these guys are wearing. Dude on the right? Parks, gloves, hood. Dude on the left? Short sleeved t-shirt.

Looks like this guy ate too much sharp Wisconsin cheddar and is now constipated. That, or he's a dad and is just trying to embarrass his kids.

You have a be pretty brave to wear Chargers jerseys to the Oakland Coliseum. You have to be even braver to taunt Raiders fans when they are losing. They have a reputation as being a quarrelsome bunch—which is just a fancy way of saying they're always beating the crap out of somebody.

When the guy who calls himself "Captain Jet" and wears a jet hat decides he's just not going to watch this sh*t anymore, you're doing something terribly wrong. Right, Mark Sanchez?

Needless to say, Jets fans were not thrilled with the selection of Geno Smith in the 2013 NFL Draft. Of course, after he led the team to victory in their season-opener last weekend, I suspect this guy lightening up on the kid.

Cleveland Browns fans are some of my favorites in all of sports. Every year the team is either terrible or, at best, mediocre, and still the fans go bonkers for them. (Well, up to a point.)

If you are a Chicago Bears fan, this is your hell—sitting in Lambeau field, surrounded by Cheeseheads. It's no wonder, then, why this guys looks so morose. He is seething with hatred.

7. Bear in a Sea of Cheeseheads

Like I said, I love me some Cleveland Browns fans. If this guy wasn't wearing the dog costume, he'd just be any old fan shaking his head in disappointment. With the dog costume, however, he adds the whole "sad puppy dog eyes" thing into the equation.

The source of this guy's confusion? He simply does not remember when the Tennessee Titans became an AFC powerhouse. "How on earth," he's wondering, "are we loosing to Tennesse 23-3?

Yep, these days Jaguars fans have it rough. There is absolutely no chance in hell this team will make the playoffs...probably every again.

And, hey, what the hell, let's throw in one more GIF of a dumbfounded Jags fan, just for good measure. (Can you ever really get enough?)

For some reason this guy is soaking wet in 39 degree weather, but he doesn't seem to be bothered by this at all. He's just pumped about his saints, which is pretty great.