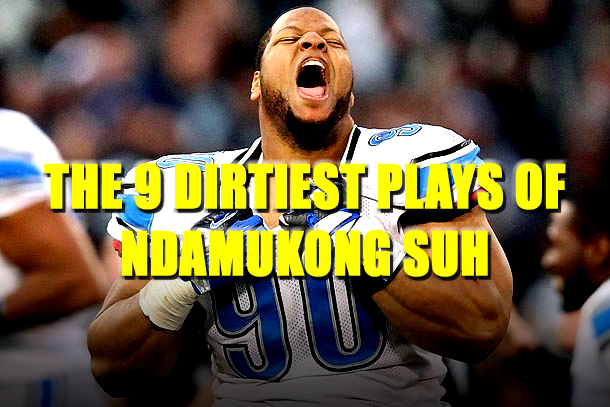 Detroit Lions defensive tackle Ndamukong Suh is only in his fourth NFL season, but he’s already acquired a reputation as the dirtiest player in the league.

Officially, of course, this is a bad thing. But  Lions fans who like the idea of actually winning football games probably don’t mind all that much. They probably echo the sentiments of Lions defensive coordinator Gunther Cunningham, who said he doesn’t want Suh to change his style—because as long as he’s on the field, every member of the opposing offense has to watch his back.

Today we’re going to take a look at how Suh has acquired his reputation. (Hint: it has caused other players a lot of pain.)

Ready? Then let’s take a look.

Technically there's nothing wrong with this hit, so I couldn't really call it "dirty." However, there are a few factors that make it noteworthy, the first being that this was the preseason (August 15), and Browns running back Trent Richardson could have been forced out of bounds without major contact. The second factor is how close this came to being a helmet-on-helmet hit. An inch or two north and Suh would have been looking at a hefty fine. Third, and last, it's Ndamukong Suh. Every hit he makes gets scrutinized now—and, as we'll see, this is for good reason.

Technically, this tackle on Marion Barber was from the Lions-Cowboys Thanksgiving game in 2010 was legal. The rules state that you're allowed to tackle by any part of a player's body, including the hair. Moreover, if you wear long hair in the NFL, you have to expect this sort of thing to happen. That being said, there is legal and then there is sportsmanlike. And this certainly wasn't a sportsmanlike play—which is why Suh apologized (or said he apologized) to Barber after the game. Incidentally, the refs actually blew the call on this play. They flagged Suh for a horsecollar tackle, which it clearly was not. If they really wanted to get him, they could have called a face mask, because at least Suh's hand was in the vicinity of Barbers face.

8. Andy Dalton's Welcome to the NFL

Look, I'll be the first one to admit that I'd like to smack Jay Cutler on the back of the head. But I'd like to think that, in a game setting, I would be able to resist the temptation so as not to hurt my team's chances of winning. Ndamukong Suh doesn't play that way, though. And in December 2010, he started his now-legendary "rivalry" (if you want to call one guy repeatedly kicking the crap out another guy a rivalry) with Jay Cutler by giving him this whack to the back of the shoulders and/or head. Replays later showed that Suh probably hit Cutler below the head, but the NFL fined him $15,000 anyway.

7. Forearm to the Back of Jay Cutler's Head

Round two of Suh v. Cutler? That came in a November 2011 game. Suh tackled the Bears quarterback from behind, rapping his arms around his head and popping his helmet right off his head. The Lions DT didn't get fined for this one because it's hard to say for sure that he was being intentionally violent. But, um, yeah, he probably was.

6. No Helmet for You

Last October, for the third straight year, Ndamukong Suh found and punished Jay Cutler. In fact, "punished" doesn't even do this one justice. "Utterly destroyed" is more apt. Once again, technically, this was a legal hit. But everyone knows this was a shady play. You have to think if this were Peyton Manning or Drew Brees or Aaron Rodgers—i.e., someone fans actually like—there would have been a lot more outrage.

This might just be Ndamukong Suh's first ever dirty play as a professional football player. During a preseason game against the Browns in August of 2010, Suh broke through the Browns offensive line (which, if we're being honest, probably wasn't that hard), grabbed Jake Delhomme by the facemask, put him in a headlock, and then threw him to the ground like a rag doll. The whole thing kind of looked like a Mortal Kombat finishing move, and it earned him a relatively small $7,500 fine from the league.

At number three we have the most recent incident involving Ndamukong Suh. It of course comes from the Lions' 2013 opener against the Vikings. Early in the second quarter, while trying to block for his teammate who was running an interception back for a touchdown, Suh threw a nasty block down low at the knees of Vikings center John Sullivan. Fortunately Sullivan came away without serious injury, but the NFL has decided it's had enough of Suh, so they suspended him for eight games. No, I'm totally kidding. Suspend a superstar? What is this, Major League Baseball? No, the league fined Suh $100K, or about .26% of his five-year $38,300,000 contract. So, you know, it hurt.

The top two dirtiest plays on this list? Yep, they both happened on Thanksgiving. Apparently Turkey makes Ndamukong Suh especially violent. The first, of course, is the famous nutshot on Texans QB Matt Schaub. Some debated whether this was intentional or a freak accident, but with Suh you pretty much have to assume the worst at all times. So the league fined him $30,000.

The nastiest play of Suh's young career? Well, there can be no doubt about the intentions here. On Thanksgiving Day 2011, while playing the Packers, Suh got up and stomped on the right arm of Green Bay guard Evan Dietrich-Smith—something, you may be surprised to learn, is not allowed. It earned him a two-game suspension without pay and cemented his rep as the dirtiest player in the NFL. (He's going to have to save Louie Anderson from drowning a lot more times before we forget this one.)