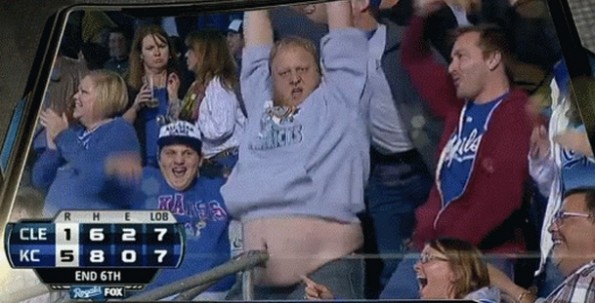 The Rays currently sit at the top of the AL Wild Card standings, holding on to the first spot, with the Rangers a game back and holding on to the second spot. After that it’s the Indians .5 games back, followed by Baltimore at 2 games back, and then the Yankees and Royals tied at 2.5 games back. That means if Texas, Cleveland, Baltimore, and New York all lose their next three games and Kansas City wins their next three, the Royals take over that second Wild Card spot.

So, baseball fans in Kansas City? Yeah, they don’t know what to do. How do you celebrate a pennant race? Do you wave your hands around in the air and make noises with your mouth? Do you jump up and down? Do you go swimming in fountains? Do you do a creepy belly dance while staring directly at a TV camera?

Check him out—but be warned, you cannot un-see this:

The funny thing is, the belly guy is so creepy that you almost don’t even notice the lame dance moves from the guy in the red hoodie, or the creepy kid. Almost.