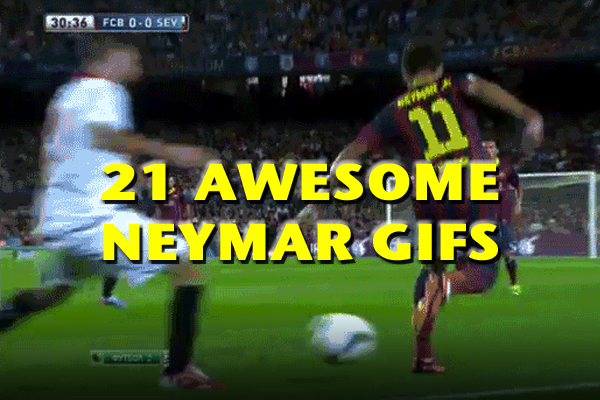 Serious soccer fans have been following the career of Neymar da Silva Santos Júnior—or simply Neymar for short—for several years now. The 21-year-old Brazilian has finished in the top 10 in voting for FIFA’s player of the year award, and in 2011 he won the Puskás Award for best goal of the year. However, all that time he was playing for Brazilian club Santos, which is not exactly a household name.

You know what is a household name? Barcelona. And now that Neymar is playing there, alongside some guy named Lionel Messi, it’s quite likely that he will become one of the biggest global superstars in the world (wherever he isn’t already).

Today, just in case you haven’t been paying much attention to Neymar, here’s a list of GIFs showing everything the kid is capable of—good and bad. Even if you aren’t a big fan of soccer, you’re still going to be impressed. So take a look.

Neymar hasn't been playing with Barcelona for long, but as this little backheel nutmeg pass to himself against Sevilla demonstrates, he's already showing what he can do.

This was a dead play, which is why everyone's just kind of standing around. But it's still pretty awesome. Neymar is pretty much just playing keep-away.

20. Chip Pass to Himself

I know this one from this past summers Confederations Cup looks kind of simple, but it's not. It's actually a pretty ridiculous goal. The keeper didn't think there was any way Neymar could put the ball where he did...and he was wrong. And it wasn't the first time the kid had scored a beautiful set-piece goal, either.

Someone in Brazil should remake Bend It Like Beckham and call it, obviously, Bend It Like Neymar. The title doesn't have the same ring to it, but it's definitely more fitting these days.

I said in the introduction that the upcoming season with Barcelona might prove to be Neymar's big coming out party. However, in actuality, that party began in Brazil this summer at the Confederations Cup. Neymar scored a number of remarkable goals during that World Cup preview, and this was one of them.

That last volley goal at least took one bounce on the ground, which took some of the spin off the ball. By contract, Neymar strikes this one right out of the air—and the kid makes it look so easy.

I'm not sure if, technically speaking, this is in fact a "Cryuff turn," because Neymar doesn't fake a shot before turning in the opposite direction. But it's close enough, and it is slick as hell. So just go with it.

Hey, nobody's perfect. It's only fair, then, that I show you the worse of Neymar along with the best. And this ridiculous dive is certainly the worst. Of course, as with every other ridiculous sports play in recent years, the internet (yes, I refer to the internet as a singular entity) had some fun with this one...

Hey look, it's Ken from Street Fighter. What a bastard.

And now it's Liu Kang from Mortal Kombat. Man, Neymar has the worst luck, doesn't he?

Yep, that's good comedy. Somebody stepping on a rake always gets a laugh. Neymar is like a young Jerry Lewis.

I'm not sure who to blame this one on. On the one hand, the opposing player did make a pretty dangerous stab at the ball with his spikes which really could have caused some damage if it had struck Neymar's flesh. On the other hand, those are some seriously baggy shorts. Let's call it a draw.

We told you about this one when it happened. During a friendly against Colombia, Neymar gave us one of the worst penalty kick fails of all-time, launching the ball about 15 over the crossbar and, as you can see, into the stratosphere, where is knocked poor Felix Baumgartner right out of his space balloon.

Oh, what's that? You've got Neymar double-teamed and pinned in the corner? Yeah, that's a goal. Better luck next time, Mexico.

When I first saw this GIF I thought it was doctored, and that the person who made it took the video footage and played it forward and backward a couple times. But no, that is not the case. This is really how this play went down. Mesmerizing, isn't it?

When we saw Neymar flick the ball over an opponent's head earlier it was a dead play. Here he is doing it for real. Seriously, why pass when you can do this?

This goal didn't win the 2012 Puskás Award from FIFA for "Goal of the Year," but it was one of the finalists. And if you think this one is good, wait till you see the next one...

Yep, this one won the 2011 Puskás Award, because IT IS RIDICULOUS. No wonder they compare this guy to Messi. He's a magician.

Once again, here is Neymar demonstrating that double-teaming him is no guarantee that he won't blow right past you. Unfortunately, after the move you see here the kid got tripped up, so this didn't lead to a goal. But it's still incredible.

If you ask me—you are asking me, right?—nothing captures the insane talent of Neymar better than this GIF right here. There is no way this kid should have come away from this situation with the ball, and yet there he is. Look, I know they don't score many goals in soccer, and the guys dive way too much. But how can you not appreciate this?