Evan Longoria Blindfolded Himself With His Own Helmet (GIFs) 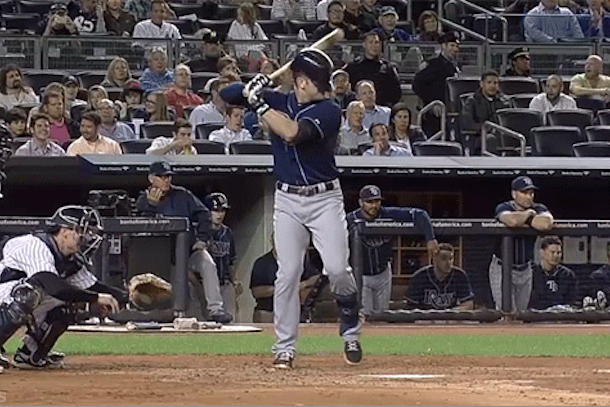 It’s hard enough to hit a Major League fastball when you have full use of both your eyes. I can’t even imagine what it would be like to stand at the plate and only be able to hear the ball wiz by you.

Tampa Bay Rays third baseman Evan Longoria knows what it’s like, though. Last night against the Yankees, facing Phil Hughes in the top of the third, Longoria bumped the back of his batting helmet with the barrel of his bat, tipping the helmet forward so that the bill came down below his nose, leaving him completely blind. It took him only a split second to determine that the best course of action in that situation is to simply step out of the box, but by that time the ball had already popped in the mit of catcher Chris Stewart.

Want to see it? Well, here is angle one:

And here is angle two:

Sadly, that’s probably the easiest first pitch strike Hughes got all night. The guy completed just two innings, giving up seven hits, a walk and three runs, and the Rays went on to win 8-3, officially knocking the Yankees out of the postseason hunt.