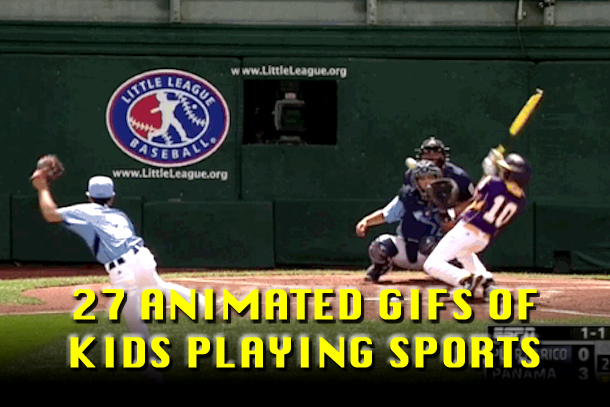 Everyone knows that children are the future (unless they come between you and a home run ball). But guess what? It’s not the future yet, and until it is we are in charge of everything, including the Internet. So if we want to look at a bunch of animated GIFs of children playing sports—and mostly failing—then that’s what we’re going to do. They wouldn’t even be playing sports if we didn’t take care of the fields, referee the games, coach them, pay the fees, and make the equipment. They owe us a laugh or two for all that hard work, right?

Right. So take a look at this list. You will laugh, starting right now with this…

Seriously, what parent doesn't fantasize about their kid becoming a famous athlete and taking care of them in their old age? Somebody just needs to tell this guy that there's not a lot of money in table tennis.

I'm not sure what is supposed to happen here, but it probably isn't this.

If you think he felt bad watching his pitch bounce wide like that, imagine how he must have felt when ESPN sent him the bill for their camera.

Seriously, though, what did the adult in this one think was going to happen? Let's hope it was an aunt or a friend and not mom, otherwise this kid might be in trouble.

23. No Future in Motocross

You can't even write physical comedy this good.

I don't even know what is going on here, but it reminds me of my youth. We were always doing something dumb like this.

...and then he went to the hospital to get a cast on his foot. (JK, I have no idea if he did that. Probably, though.)

I'm guessing the pitchers back in Panama don't have very good curveballs?

On the one hand, I feel for this kid. His dad obviously did not attached the hoop to the garage very well. But, on the other hand, his dad probably didn't think he would be hanging from it.

Nothing wrong with this. Mom is just trying to toughen the kid up a bit.

This kid got away with one here. Ninety-nine times out of a hundred, natural selection would have had its way with him.

In fairness, I would have been hesitant to hurl my genitalia at the vault, too.

What do you supposed this kid thought was going to happen? And who was filming it?

Sometimes you attack the rim. Sometimes the rim attacks you. It's the law of the jungle, kid.

I bet you anything this kid knew exactly what he was doing, and was just waiting for the perfect opportunity.

Interestingly, this is exactly what it's like to watch the Jacksonville Jaguars.

Seriously kid, get your head in the game. Number 12 is not here to waste his time.

If this is what happens with his warmup swings, imagine what must happen when he's facing a pitcher.

Yeah, that looks like it really hurt. Perhaps they should encourage little league catchers to leave their helmets on.

Seriously buddy, keep your eyes on the road.

5. No Future in NASCAR

I've said it before and I'll say it again—there is just no way this was going to end well.

Depth perception is an under-appreciated aspect of successful athletics. This kid apparently doesn't have it.

Apparently this kid is blind. Do I admire his determination? You bet I do. I wish I had half of what he has. But, come on, you have to laugh a little bit, right? This is like a bit from a Mel Brooks movie.

If you don't laugh at this you probably don't have a sense of humor. It's one of the greatest animated GIFs of all-time.