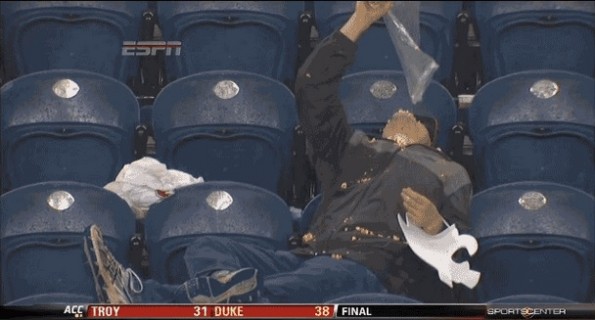 One advantage that horses have over humans is the widespread use of the feedbag—where a bag of oats is fastened directly to the horse’s nose, allowing it to eat from the bag without any action other than what it takes to chew. So it’s kind of inspirational that an enterprising Washington State fan stumbled upon an equivalent process for humans over the weekend.

As you can see in the GIF below, this guy created a human feedbag in order to guzzle as much popcorn as humanly possible without even pausing to shovel it in with his hands:

And no one seemed to enjoy his antics more than the commentary crew.  Check out the video:

If you think that his creativity was a result of hopelessness on the field, you’re probably right, as Washington was beaten 55-17 by Stanford. But hey, this guy found a cool new way to eat popcorn, so let’s call it a draw.