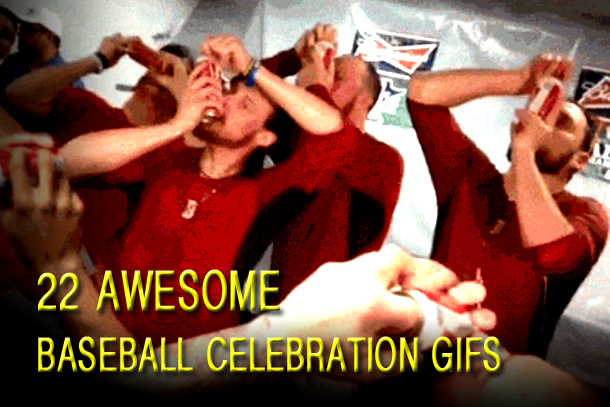 Well, it’s that time of year again—the time when grown men in stretchy pajama pants gather together in a room with walls covered in plastic to waste tons of perfectly good alcohol. I am referring, of course, to the MLB postseason and the spraying of bubbly liquids in the locker room after a team has (a) secured a spot in the playoffs or (b) clinched a playoff series victory. What started out as a spontaneous celebration is now an ornately planned ritual in which every victorious team takes part.

Today, with the NLCS all set and the ALCS about to be finalized tonight, it’s the perfect time to do a list of baseball celebration GIFs. Why? Because they’re fun. And sometimes weird. And sometimes awkward. Not all of them involve champagne, of course, but they’re all amusing because they all feature grown men acting like children all jacked up on sugar and on their way to Disney World. So enjoy.

The Orioles haven't had much to celebrate since 1996, so even though they didn't go very far into the postseason (losing to the Yankees in the ALDS), they still partied pretty hard after earning a Wild Card and defeating the Texas Rangers in the one-game playoff.

The Athletics are hoping they do a lot more of this tonight after Game 5 of the ALDS against the Tigers.

No wonder Matt Kemp has been injured all year. When you celebrate home runs like this you're bound to pull or tweak something.

Excessive celebration? Probably. Then again, nobody knows what's going to happen when Jose Valverde takes the mound. Tigers might win the game. Other team might hit two doubles and a home run. So when Jose actually does close it out, he's pumped.

If you can manage to ignore Johnny Gomes and his army helmet for a just a moment, please notice the guy on the left who's pretending the champagne bottle is his dong. Classy.

And here's David Ortiz dry-humping Koji Uehera. Because winning makes you want to do that sort of thing.

If there's one thing we've learned about Yasiel Puig this year it's that he's a bit of a loose cannon. So the fact that he took out Craig Sager and the TBS camera while giving Juan Uribe a Gatorade shower? Not that surprising.

And this is how Hunter Pence celebrates winning the World Series.

Brett Gardner hits a walk-off homer, then tells A-Rod to hold his hat while he celebrates with the Yankees he doesn't despise. Now that's how you celebrate.

Meanwhile, here is an awesome slow-motion shot from the Cardinals' celebration last night after defeating the Pittsburgh Pirates in Game 5 of the NLDS.

Hey, not all great baseball celebrations from pro ball. College kids (like the Cincinnati Bearcats baseball team) know how to party, too.

When the Tigers clinched the AL Central, manager Jim Leyland did the moonwalk. It was pretty good for a 68-year-old baseball man.

The poor Phillies don't have all that much to celebrate these days. So, you know, when they win in dramatic fashion, they get a little carried away.

When he's not dry-humping teammates, Ortiz is giving himself a champagne facial. What can I say? He's a colorful individual.

The UCLA Bruins won the 2013 College World Series and celebrated with a classic dog pile. Unfortunately, not all of them had the art of dog piling mastered.

6. Falling Off the Dog Pile

Here we have Chris Dickerson and Adam Jones showing off the moves they use to impress the ladies at the club. Smooth, right?

Hey, not all the celebrating takes place on the field. Sometimes you gotta take the party to the team plane like the Blue Jays Munenori Kawasaki did earlier this season.

The team that shotguns beers together wins together, right? Well, Red Sox Nation hopes so, at least.

Leave it to Yasiel Puig to combine a classic disco-funk dance move "the worm" with some traditional Russian folk dancing. It's kind of hard not to like this guy, isn't it?

And let's wrap things up with Brian Wilson in a goggles spraying champagne in such a way that it looks like...um...wow. This is going to haunt your dreams tonight, isn't it?