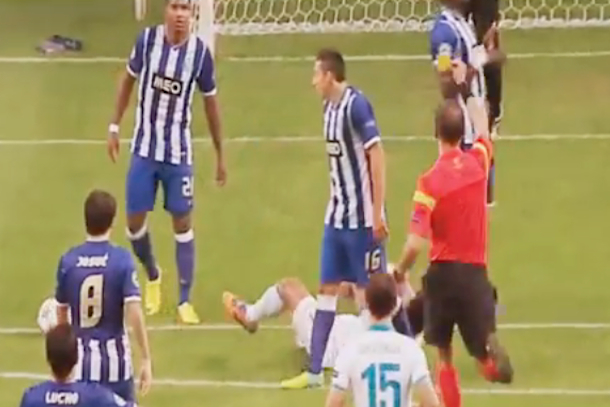 Last March we told you about the incredible achievement of the Toronto Maple Leafs’ Colton Orr, who managed to rack up an incredible 29 minutes in penalties in just two seconds of ice time.

Today we’ve got the soccer equivalent. On Tuesday, Mexican soccer player Hector Herrera, a midfielder for Portugal’s Porto FC, received two yellow cards in just 20 seconds. When you remember the fact that, unlike other sports, the clock never stops in soccer, as well as the fact that two yellow cards earns you a red card and an automatic ejection, that’s pretty unbelievable.

The feat was achieved during Porto’s UEFA Champions League match against Russia’s Zenit St. Petersburg. Herrera earned his first yellow card thanks to a pretty dangerous tackle on ZSP’s Hulk. Then, on the ensuing free kick, Herrera jumped out from the defensive wall too early and blocked the ball. For that he got a second yellow card.

Obviously, referee Paolo Tagliavento probably could have chosen not to give the 23-year-old the second yellow. But that block was a jackass move, as was the initial tackle, and the ref was probably tired of Herrera being a jackass. So he kicked him out and helped him set a record for fastest two yellow cards in the history of Champions League play.

Hector’s mama must be so proud.