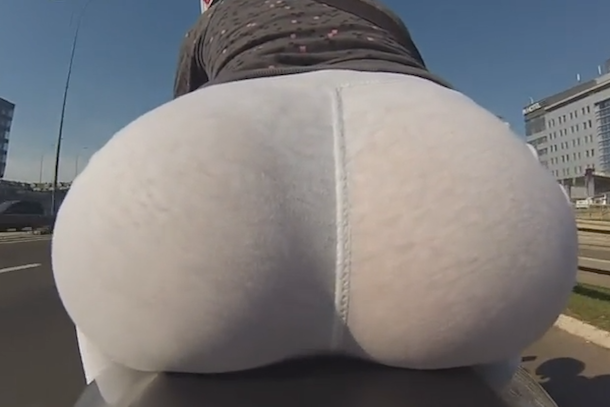 GoPro cameras have provided us with some pretty amazing extreme sports footage over the years. And I’m not just talking about people skydiving or bungee jumping either. We’ve seen footage of a guy water skiing through the streets of New York after Hurricane Irene, and more recently we’ve seen footage shot by a GoPro cam that was strapped to the back of a freakin’ eagle in the French Alps.

However, only now have we seen the full potential of a GoPro action camera. Because only now has some hot chick in yoga pants decided to strap a GoPro to the back of a crotch rocket and film herself riding around town in yoga pants. For 11 minutes.

Obviously, this is the zenith of Western Civilization. Thousands of years of art and science have led to this. It’s all downhill from here.

I’d say “take a look” or “check it out”, but you probably stopped reading and hit play at “yoga pants” and are two minutes in already.

GoPro can’t make commercials like this. But if they could, they would. This is some pretty good advertising.