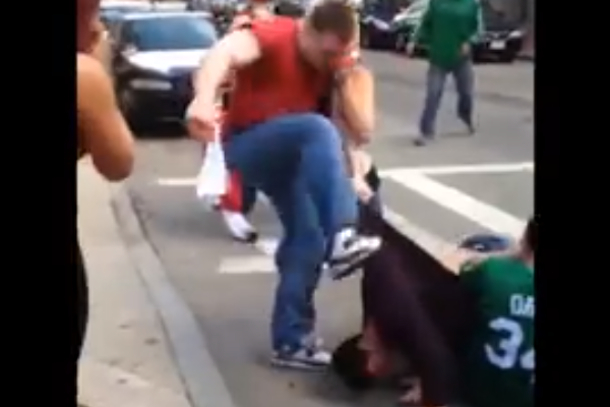 You’ve seen the headlines connecting the Red Sox’s World Series victory to the tragic Boston Marathon Bombings, right? The ones claiming that the championship has helped “heal” the city, that it helped people “reclaim” the city, and that it was, according to President Obama, “thereputic medicine”?

Well, all of that is probably true to some extent. But of course, the Sox’s World Series victory was also a pretty great excuse for people to flip cars, crowd surf from traffic lights, and beat people to a bloody pulp.

That’s right, the sense of togetherness that the Red Sox inspired with their march to a championship lasted until about five minutes after the victory parade, when a nasty brawl broke out between fans that left two people in the hospital and two other people in jail.

The two arrested? They have been identified as Liam Browne, 23, and Kieran Boyle, 21. Both of them saw men already on the ground and decided that kicking them in the head would be a good idea. Both were charged with assault and battery, both are now out on bail, and both are due back in court in February.

Obviously there is video of the melee, since everyone has a smartphone these days. What’s surprising is that, despite the fact that the person who shot the video held the camera vertically, the footage itself actually manages to capture all the violence. We don’t know who is who, but Browne and Boyle are obviously the guys wearing the red and green shirts. And they are quite obviously major scumbags.

In fact, they make those Cowboys fans who attacked people with beer bottles look almost honorable.