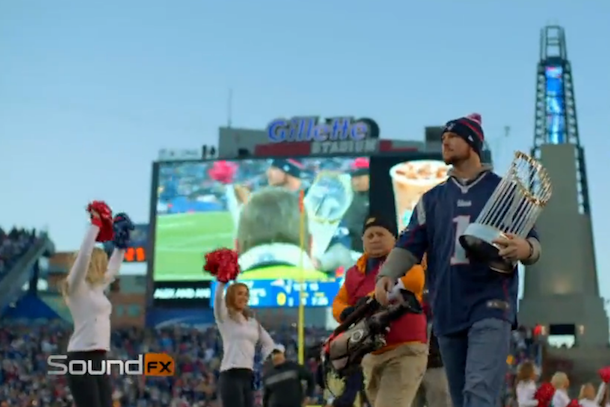 Chances are you already thought Bill Belichick and the New England Patriots were a bunch of arrogant d-bags. That’s probably why so many of you enjoyed the South Park clip of Tom Brady crapping his pants.

Well, if that’s the case, you’ll probably enjoy this video, too.

You see, on Sunday, the 2013 World Series champion Boston Red Sox stopped by Gillette Stadium in Foxborough to hang out at the Patriots-Steelers game. They brought the Commissioners Trophy, they put on some Patriots gear, they strutted out to the center of the field, and they got a huge ovation from the crowd.

All in all, it was kind of cool…except for the part where the Patriots kept making fun of how small the Red Sox players were. They just thought it was a hoot—Dustin Pedroia and Shane Victorino in particular.

Now, I’m sure the Patriots deeply respect the Red Sox and what they’ve accomplished this year. Really, I am. But you have to admit that stuff sounds a bit…well, belittling, doesn’t it?

Here’s my advice to the Patriots going forward: just don’t say anything. About anything. Ever. People will still think you’re jerks, but at least they won’t have any proof.